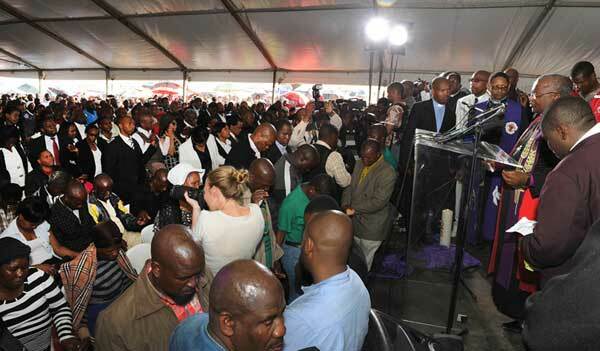 Miners at Lonmin’s Marikana platinum mine in South Africa struck unofficially on Tuesday of this week over the shooting of a union rep. The walkout closed the entire mine.

Steve Khululekile was gunned down as he watched a football match near Rustenburg last Saturday. Thousands gathered to mourn his death.

Steve was a regional organiser for the AMCU union in Lonmin’s mines in Marikana. His is the latest death in a wave of killings that began last year.

The AMCU union grew during a miners’ dispute last August. Police massacred 34 striking miners as they gathered in Marikana.

The strike saw growing tensions between the newer, more militant, AMCU and the NUM union.

Steve was the charismatic former NUM union chairperson. He opposed corruption in the union.

He also led action and was fired which led to an unofficial strike in 2011. Workers deserted the NUM for not supporting him and the AMCU became the majority union at Lonmin.

Numerous union officials lost their cushy jobs and generous perks. These former officials are very angry about having to go back into the mines on paltry wages.

This is a weakness for the NUM.

The Marikana Commission of Inquiry is investigating last year’s massacre.

Some of those due to testify at the commission have been killed, including union officials in the AMCU and NUM unions.

Local NUM branch secretary Daluvuyo Bongo was shot dead before he gave his testimony to the commission.

Many workers believe that police, or union officials, are behind the killings.

Short bursts of gunfire from the police on the day of the Marikana massacre killed three of the four strike leaders. Some say they were targeted by security forces.

Some 270 striking miners were disgracefully charged with murder after the police massacre—and these charges have never been dropped.

Seven of the miners have killed themselves.

The latest, Lungani Mubatyani who died last week, was due to appear before the commission.

Miners who went through the massacre have received no assistance from the company or the state for their trauma.

Lungani was recently fired by Lonmin. He was anxious and worried about debt.

Some workers believe that the bosses are conspiring with the African National Congress government and the NUM to hold back the militancy of the AMCU.

Others say that the platinum firms and AMCU are conspiring to break the hold of the NUM.

The interests of all miners must come before turf wars between union leaders.

Rehad Desai is the spokesperson of the Marikana Support Campaign. He writes in a personal capacity and will be speaking at Marxism 2013
Topics Marikana massacre, South Africa