This article is over 15 years, 6 months old
Hamas and Hizbollah will be sending delegates to the next anti-war conference in Cairo, Egypt, from 29 March to 1 April.
By John Rees, vice president (Europe), Cairo Conference
Downloading PDF. Please wait...
Saturday 03 February 2007

Hamas and Hizbollah will be sending delegates to the next anti-war conference in Cairo, Egypt, from 29 March to 1 April.

They will meet with delegates from the international anti-war movement who are heading to Cairo from as far afield as South Korea and Canada, Latin America, Iran and several countries in western Europe.

The preparatory committee for the conference met in Cairo last weekend. It sketched out a preliminary agenda including sessions on the resistance in the Middle East, nuclear weapons and nuclear power, Islam and the left, and sectarianism and resistance.

The committee also reconfirmed the commitment of the last three Cairo Conferences to holding the Cairo Social Forum as a simultaneous part of the main conference.

As in previous years, this will give anti-globalisation campaigners and democracy activists the chance to raise economic and social issues as part of the broader anti-war movement.

Specific sessions for workers, peasants, women, students, artists and professionals will take place in the forum.

These social forums have been very important in allowing trade unionists, anti-war and anti-capitalist activists to exchange experiences.

The preparatory committee, like the conference itself, involves many of the main opposition currents in Egyptian society including the socialist left, the nationalist or Nasserite currents, and the Muslim Brotherhood.

At a time when Hosni Mubarak’s dictatorship in Egypt is trying to enforce a new clamp down on democracy activists and the Muslim Brotherhood, a show of strength from the international movement at the Cairo Conference has never been more important.

And as George Bush and Tony Blair deploy more troops in Iraq and threaten Iran, international solidarity is the watchword of the hour.

This is widely understood in the international movement as the enthusiastic response to the Cairo Conference among a wide range of delegates to last week’s World Social Forum in Nairobi, the Kenyan capital, proves.

But for the conference to reach its full potential all anti-war activists need to take on the task of raising it in their anti-war, Palestinian solidarity, student union or trade union groups.

If you would like to go to the Cairo Conference with the Stop the War Coalition delegation from Britain or if you would like more details email [email protected] or phone 07906 243 381. 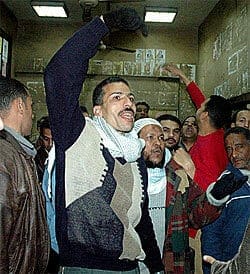