The Greek government  began its turn at the head of the European Union (EU) last week amid continuing protests against its austerity programme.

Doctors in social services have been striking against job cuts since last month. Teachers are expected to hold a new national strike against layoffs next month.

And the year began with a major humiliation for hated health minister Adonis Georgiadis, a former member of fascist party, Laos

Hospitals were supposed to start charging more than £20 for each visit on 1 January. But the plan was dropped after furious health workers made it clear they would block payments offices and boycott the fee.

“The Greek government hopes the EU will offer it a timetable for rescheduling the debt payments,” said Panos Garganas, editor of Workers Solidarity newspaper.

“Despite the years of austerity the debt is not sustainable—again.

“The government is hoping that the EU will offer some kind of restructuring to put it in a better position for the European parliament elections.

Hundreds protested in central Athens last week during the ceremony to mark Greece’s tenure as head of the EU.

This was despite police repression and a lack of mobilisation from the two biggest left parties, Syriza and the Communist Party.

The anti-capitalist left coalition, Antarsya, called a demonstration—which was banned with less than 24 hours notice.

Police then attacked an Antarsya press conference and arrested Pavlos Antonopoulos, a teacher recently elected to the Greek TUC executive.

When Athens councillor Petros Constantinou went to court to testify for him, a policeman hospitalised him with a thump to the head.

Activists believe Petros was targeted because of his other role as coordinator of the anti-fascist movement Keerfa. 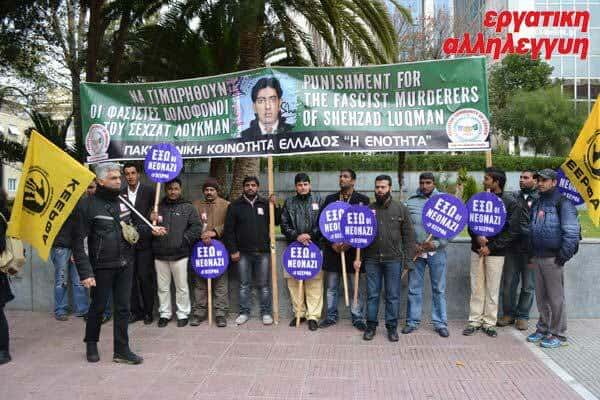 Attack on journalists backfires for Golden Dawn in Greece