Masked groups of young men smash their way into government offices, burning documents and destroying everything they can find.

In the city of Santa Cruz, Amelia Dimitri, a leader of the so-called civil protest movement, allows herself to be filmed beating an unarmed indigenous woman.

Local police and irregular forces ambush a group of peasants from El Porvenir in the province of Pando – killing at least eight and wounding four times that number.

The violence is rarely reported, however, as radio and television stations have been taken over by those who are sponsoring the racist violence that has engulfed the five wealthy provinces of eastern Bolivia, known as the Media Luna or Half Moon.

Reports suggest that what is happening in eastern Bolivia amount to what Evo Morales, Bolivia’s president, has called a “civilian coup”.

The repercussions of the unfolding conflict will be felt throughout Latin America and beyond.

The violence that has grown continuously over the last six months has escalated in the last week. It is highly organised, and its objectives are clear.

When Morales was elected nearly two years ago, the central platform of his government was the nationalisation of Bolivia’s gas and oil reserves, and the redistribution of wealth within the country towards the impoverished indigenous communities of the highland regions.

The Half Moon provinces embrace Bolivia’s most important resources. Once, it was the mines that produced Bolivia’s wealth – first in the form of silver and more recently in tin.

Today, Bolivia’s main resources are in oil, in the huge gas reserves of the east and in the highly profitable export agriculture centred on soya production.

The wealthy in the Half Moon provinces are demanding regional self-government.

But this is simply a pretext for the powerful landowners, financiers and industrialists who have led the battle to break the link with Morales’s government in La Paz.

When Morales proposed a new, democratic constitution based on the demands of the mass organisations which had carried him to power, the resistance of the wealthy and powerful eastern ruling classes began in earnest.

Blocking all legislative activity to begin with, they then organised a series of autonomy referendums in the five provinces.

Fuelled by a vicious and explicit racism, impelled by violence and organised with the explicit assistance of US ambassador Philip Goldberg, the referenda produced a majority for separation under the control of the landowners and their ilk.

The provincial leaders immediately demanded control over local resources, refused to remit oil and gas taxes to central government and moved to form their own state police forces.

It was clear that their intention was confrontation and the collapse of central government – characterised by most of the Half Moon leaders as a government of Indians and peasants.

The attacks accelerated when Morales, having won a national vote of confidence on 10 August, announced a nationwide consultation on the new constitution for early December.

Yet as the violence has increased with the assaults by neo-fascist organisations like the Santa Cruz Youth Union (UJC), the Morales government has been slow to act.

Even before the autonomy referenda, miners, peasant organisations and the powerful El Alto community associations around La Paz had called for resistance – including the blockading of highways and mass demonstrations.

The response of central government was to call for calm and in some cases to stop protests by force.

Strangely Morales’ government has shown a visible unwillingness to offer the same decisive response to the accelerating and systematic violence of the Half Moon.

Calls for renewed resistance again met repeated appeals for calm and negotiation from the government.

What is now very clear is that hesitation served only to encourage the opposition, who interpreted that hesitation as weakness. The declarations of some of the provincial governors of the Half Moon have recently reached new levels of racism. Evo Morales announced the imposition of a state of siege in the tropical province of Pando last week.

He also expelled US ambassador Goldberg, who was known to have met with two of the Half Moon governors on the eve of the latest wave of violence.

The real driving force behind the present violence becomes clear with one simple fact – the Half Moon province of Tarija produces 82 percent of Bolivia’s natural gas.

Those behind the current violence want to return the oil and gas resources of the country to private hands, and to sabotage all and any attempts to use them for the benefit of the country’s still overwhelmingly poor population.

Recent events can leave no doubt as to how high the stakes are, and how far big capital and its political allies are prepared to go to re-establish control over key resources.

Clearly there is a real danger that the violence directed at the poor and indigenous will escalate further.

The brutal attacks are deliberately designed to destabilise Morales’s government.

An appeal to reason has nothing to say to masked club-wielding thugs.

The mass movements of Bolivia have already demonstrated the kind of strength and resolution that can successfully challenge repressive and reactionary regimes. It is time to mobilise that power again.

Mike Gonzalez is currently living in Caracas, Venezuela. His books include Che Guevara and the Cuban Revolution, available from Bookmarks, phone 020 7637 1848 » www.bookmarks.uk.com 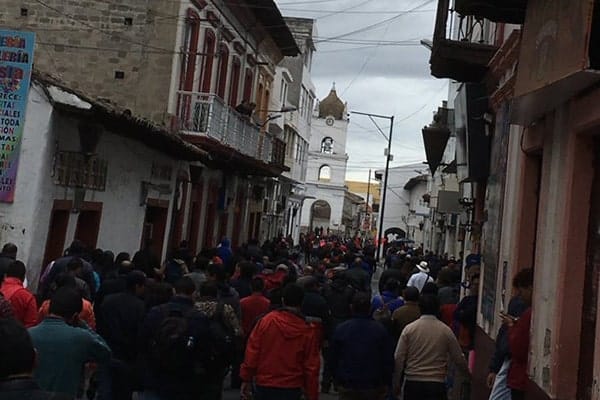