This article is over 16 years, 4 months old
A spokesperson from Coordination Nationale des Sans Papiers, which represents immigrants without official papers, spoke to Socialist Worker about the tragedy on Friday of last week and the response
Downloading PDF. Please wait...
Saturday 03 September 2005

The fire was a deep tragedy, but one that could have been avoided.

For over 15 years the families housed in this squalor have been demanding they be rehoused.

There were many warnings that such a tragedy could occur, for example, the fire in April this year.

We were told then that the government had learned lessons.

But last week’s fire shows that nothing has been done.

On Friday many immigrants and Sans Papiers protested outside the burnt out building.

On Sunday there was a march from the scene of the tragedy to the gymnasium in Porte D’Italie where the survivors are now billeted.

We are saying that we cannot live like this — the immigrants in poor, dangerous housing and the Sans Papiers without any rights.

We also fear that despite the promises from ministers there will be another tragedy in the future. 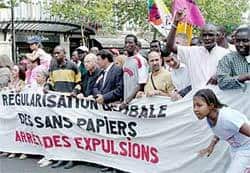