This article is over 13 years, 5 months old
Vladimir Unkovski-Korica from Serb socialist organisation Marks21 reports on the mood in the country following the capture of Karadzic
Downloading PDF. Please wait...
Tuesday 05 August 2008

The arrest of Radovan Karadzic, the former leader of Bosnian Serb forces during the Yugoslav civil war of the 1990s, marks a serious downturn for Serbian nationalism.

Ordinary people in Serbia – who suffered months of bombing at the hands of Nato a decade ago – are angry at the hypocrisy of Karadzic’s arrest.

They ask why the likes of Bill Clinton, George Bush and Tony Blair are not having to answer for their own war crimes.

But at the same time this anger is not translating into concrete support for the nationalists.

Serbian nationalists only managed to get 16,000 out onto the streets of the capital Belgrade to protest at Karadzic’s arrest.

The nationalists won 41 percent of the vote in Serbia earlier this year – so such a low turnout for the demo is pathetic.

It exposes the lie that Karadzic has any real base among ordinary people in Serbia. It also exposes the fact that there is some disorientation among the nationalists at the moment.

The current Serbian government is headed by Mirko Cvetkovic, a former World Bank adviser who won May’s general election as head of the “For a European Serbia” coalition.

The Serbian ruling class is split between those who are desperate to join the European Union (EU) and those, including the nationalists minority, who look to Russia.

Kosovo’s declaration of independence from Serbia earlier this year, backed as it was by the US, Britain and Nato, dealt a body blow to the nationalists.

Now the new government has wrested control of all the major state institutions from them, including the security services.

Karadzic’s arrest and extradition to the Hague ought to be seen in that light.

Pro-Western forces in Serbia feel they have gained the upper hand and are manoeuvring to land major blows against the nationalist, pro-Russian wing – blows that this wing is finding it difficult to recover from.

The Serbian defence minister has announced he will be signing a security agreement with Nato soon. Entry to the EU is popular in Serbia – while joining Nato is not.

Until now the nationalists have been perceived as the “social” opposition to neoliberalism.

Ever since the over­throw of Slobodan Milosevic’s dictatorship, the majority of anti-neoliberal and anti-imperialist rhetoric in Serbia has come from the right wing Radicals.

The nationalists no longer appear capable of “defending” Serbian territorial integrity and sovereignty.

Nor are they able to hold back the full-blooded introduction of free market policies.

It is likely that their ranks will now be open to a process of progressive disarray after a series of significant defeats.

Karadzic has claimed at the International Criminal Tribunal for the Former Yugoslavia that he struck a secret deal with US envoy Richard Holbrooke.

This deal guaranteed exemption from prosecution for war crimes in exchange for becoming “invisible long enough for the Dayton agreement to be implemented in full”, he says.

Whatever the truth of this claim, it served to further discredit the anti-imperialist credentials of Serbian nationalism.

All this opens possibilities for the left to become a legitimate political actor in Serbia, despite our modest forces.

We can present ourselves as much more serious about anti-neoliberal and anti-Nato activities than the nationalists.

We are untainted by the 1990s, by electoral defeats or by general acceptance, with different degrees of enthusiasm, of neoliberal measures.

That is not to say that a more militant nationalist force, including fascist organisations, will not try to recruit out of this crisis.

But nevertheless it is certainly the case that Serbia is at a crossroads of sorts. I hope the true fault lines are becoming clear – that working people cannot look to either wing of the Serbian ruling class for any degree of protection.

In the autumn the radical left in Serbia will be launching an anti-Nato campaign.

We will be working with left wingers in Greece and Macedonia to issue a statement to launch the campaign.

We will be campaigning to get NGOs and others to sign up to it.

This will all build up to the protest at Nato’s 60th anniversary in Strasbourg next spring.

Our campaign in Serbia can open up a space for the left that we have never had before.

For more details of the Marks21 group go to » www.marks21.info

Clinton gets a warm welcome 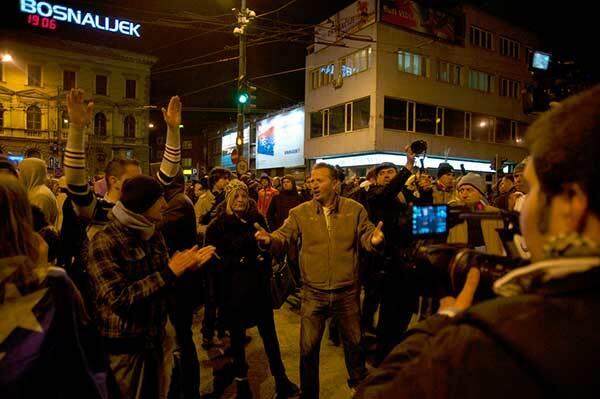 Protests in Bosnia can push back nationalism