Slowing down Bolkestein’s race to the bottom

Tens of thousands of workers protested outside the European parliament in Strasbourg, France, on Tuesday of last week against the neo-liberal Bolkestein directive.

The wave of protests against the directive forced MEPs to vote to water down the directive which covers trade in services across the European Union (EU).

Kartika Liotard, an MEP for the Dutch Socialist Party, said, “After the magnificent series of protests against the Bolkestein directive, the neo-liberals had to take a step back. But they are still pushing ahead with their agenda.

“The compromise between the Christian Democrats and Social Democrats watering down the directive in the European parliament was cosmetic.

“The core of the directive remains intact – competition on the policy level between member states and the setting in motion of a downward spiral ending at the lowest common denominator of current European standards.

“The compromise mainly concerns limiting the directive’s scope and the removal of the controversial country of origin principle.

“Instead of unequivocally excluding concrete matters such as healthcare, education, culture and social security from the directive, it says ‘the directive shall have no effect on national legislation in these areas’. Yet this was never the problem.

“The core of the matter is – and remains – that this national legislation will in part be rendered ineffective as it becomes a ‘just let the courts decide principle’.

“The expression ‘country of origin principle’ is no longer to be found. Instead it is ‘freedom to provide services’, an amendment which means little.

“The history of both institutions makes it clear that they will give preference to interpretations of all of these rules which are as favourable as possible to neo-liberalism.

“The drive for companies to establish businesses in the EU state which has the least or weakest regulation and, from that base, to operate in all other member states with the aim of reaping unfair competitive advantages remains unaffected.

“The huge number of problems concerning the consequences of this kind of liberalisation of trade in services to which trade unions, political parties and social organisations have for the last two years drawn attention have scarcely been addressed.

“Significantly, an amendment that aimed to allow member states to restrict service providers on grounds of consumer protection and social policy was rejected. So professionals such as lawyers and doctors are protected, while ordinary workers are not.

“The proposal for a European services directive remains what it always was – the granting of complete freedom to the market, leading not to a higher level of quality in all member states but to a race to the bottom.”

Francis Wurtz, the chair of the United Left group of MEPs, told Socialist Worker, “A poor compromise between the European social democrat and right wing parties has been approved by a majority of the European parliament.

“The United Left group of MEPs was involved in the drawing up and arguing for lists of sectors to be excluded from the directive.

“Even so, we do not want a directive that continues to make competition the rule and the safeguard of acquired rights an exception, which must be justified on a case by case basis.

“Our group firmly believes that it is in tune with the expectations of millions of European workers to call for the outright rejection of the Bolkestein directive.

“The arm wrestling match with the European Commission and the council of ministers will not stop here.

“During the months ahead and right up to the final vote by the European parliament, public debates and social mobilisation will continue and even intensify. Our objective remains the rejection of the directive.”

The bosses’ CBI organisation complained last week that the EU parliament had “delivered only an emasculated version of a directive”.

TUC general secretary Brendan Barber broadly welcomed the vote on Bolkestein. He said, “While we still have some points to press, the parliament’s main left wing and right wing groups have voted to continue the key principle that makes Europe more socially progressive than the US – that we should balance the economic benefits of liberalising trade with the protection of people at work, consumers and the environment.”

However there are far more critical voices. Mike Gibbons, a member of the T&G general executive and a dock workers’ convenor in Southampton, said, “Last week’s vote was a partial victory but you have to question how we turn back not specific bits of legislation but the waves of attacks on workers from Europe.

“What we are missing in Britain is a commitment to fight neo-liberalism. Formally the TUC is against Bolkestein but in reality it did very little to mobilise people against it.

“The race to the bottom is still being pushed through. In the coming months we have to fight to get our unions to mobilise against further attacks.”

Unison union member Kerri Parke took part in last week’s protest in Strasbourg. She said, “It was a such a shame that the TUC didn’t really take the demonstration seriously. There was a very small delegation from Britain as it seemed the TUC didn’t encourage unions to send people to it.

“The Irish ferry workers proved towards the end of last year that workers are prepared to go out on strike in support of workers’ rights wherever they come from. We need to make sure that we put pressure on the TUC to push for action against Bolkestein in the future.” 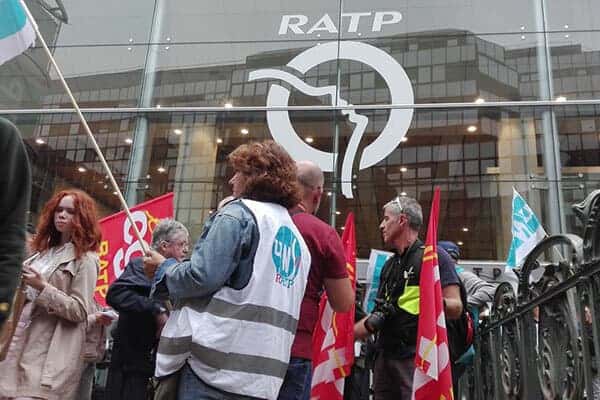 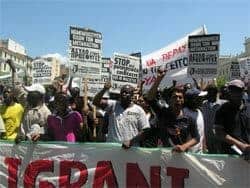 Austerity rains chaos down on Greece