Socialists are at risk in Zimbabwe

This article is over 11 years, 5 months old
A group of socialists in Zimbabwe faces a possible death sentence for watching a video about the Egyptian Revolution.
By Yuri Prasad
Downloading PDF. Please wait...
Tuesday 01 March 2011

A group of socialists in Zimbabwe faces a possible death sentence for watching a video about the Egyptian Revolution.

Forty-five activists were charged with treason and “subverting a constitutionally elected government” in a Harare court last week.

The attack is part of a general clampdown organised by the dictatorship of Robert Mugabe. He fears that the wave of uprisings in the Middle East and North Africa could spread south.

The arrests followed a police raid on a meeting to discuss the implications of the Egyptian revolution for Zimbabwe organised by the International Socialist Organisation (ISO), sister organisation of Britain’s Socialist Workers Party.

The accused were led into court on Wednesday of last week handcuffed and in leg irons.

Many had sustained injuries while in detention, and all—including those who are HIV positive—have been prevented from receiving drugs and medical attention.

One of those charged has only recently been discharged from hospital following brain surgery. Another detainee, whose leg was broken after she was thrown down a two-storey stairwell during the raid, is also being denied proper care.

State prosecutors allege that leading ISO activist and former opposition member of parliament, Munyaradzi Gwisai, and other participants at the video showing were planning to “organise, strategise and implement the removal of the constitutional government of Zimbabwe… the Egyptian way.”

They say that the meeting participants took turns to make speeches calling for a revolt against Mugabe’s longtime authoritarian rule.

Defence lawyer Alec Muchadehama says the police denied him access to the detainees prior to their first court appearance—meaning they were without proper legal representation.

Outrage at the arrests, torture and the charges is spreading. Bongani Masuku of the 1.8 million-strong Congress of South African Trade Unions (Cosatu) has pledged the support of his organisation.

He said, “It is no doubt that the Egyptian and Tunisian experiences have inspired many workers and poor people all over the world to stand up and demand an end to dictatorship, corruption and injustice of whatever kind.

“Cosatu condemns the continued persecution of political activists in Zimbabwe and the never improving situation in that country.

“The detention of the activists of the ISO in Harare on baseless charges of plotting to topple the government indicates the state of insecurity in that country.”

With dictators falling like dominoes, the Zimbabwean state is desperate to intimidate its opposition into silence. They hope that by making an example of the ISO, others will fear to follow them in resisting the government.

Socialists in Britain, and around the world, can play a practical part in supporting the fight in Zimbabwe. Comrades there need to be inundated with messages of support.

Embassy protests can show the Zimbabwean state that the eyes of the world are upon them.

And, with the families of those imprisoned in desperate need of funds, we can ensure that they have food on their tables and a roof over their heads by taking collections in our workplaces and colleges.

We can also help the ISO with their legal fees and the cost of replacing the equipment damaged by the police raid.

The ruling clique in Harare may believe it can hold back the tide of history that is busy sweeping away its dictator friends elsewhere.

By charging the detainees with treason, Mugabe and his henchmen have deliberately raised the stakes to an extremely high level. But threats of this kind can backfire. 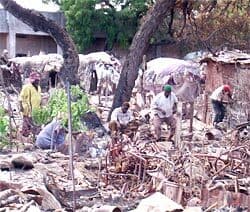