This article is over 11 years, 7 months old
A general strike brought Spain to a standstill on Wednesday of last week. Its scale and militancy took the government, the bosses, and even many on the left, by surprise.
By Jesús Castillo from the Andalusian Workers Union and the socialist group En Lucha
Downloading PDF. Please wait...
Tuesday 05 October 2010

A general strike brought Spain to a standstill on Wednesday of last week. Its scale and militancy took the government, the bosses, and even many on the left, by surprise.

According to the unions, over 70 percent of workers struck—in large workplaces the figure rose to 85 percent. Electricity use fell to Sunday levels and road traffic was down by half on a normal working day.

From the early hours of the morning, thousands of workers joined picket lines that spread out across every city, and convinced many other workers not to work.

In Barcelona, strikers converged outside a large bank in the city centre. It was occupied by protesters and draped with enormous banners denouncing capitalism.

The police attacked many pickets, leading to riots. In the city of Getafe, near Madrid, they even fired warning shots using live ammunition.

Despite the provocations, in the afternoon workers poured onto the streets. Around one and a half million workers demonstrated, with many chanting, “Let the capitalists pay for the crisis.”

Even smaller cities, such as Oviedo and Zaragoza, saw demonstrations of around 100,000.

For years the major unions have taken a conciliatory approach to José Luis Zapatero’s Labour-type government, and the level of struggle in Spain has been low.

But, despite Zapatero’s claims that he “would never make workers pay for the crisis”, since May his government has made a sharp turn to austerity.

It allied itself with the inter­national investors demanding lower wages and huge public spending cuts to make the economy more “competitive”.

Spain’s unemployment now stands at five million, the highest in the European Union. Nevertheless, the government has pushed through a new labour law making it easier for employers to sack workers.

Many people thought the strike would not be effective because the unions were so discredited after years of “social partnership”.

Certainly the unions’ campaign started badly when they delayed the general strike until after the summer, giving the government ample time to prepare.

But in the run-up to the action the two main union federations sprang into action.

Some 16,000 shop stewards from across the country met in Madrid, and soon the major cities were abound with strike posters and leaflets.

Activists from the radical left set up strike assemblies in neighbourhoods in Barcelona and Seville to help build the action.

The success of the strike is putting the government under huge pressure and boosting workers’ confidence. Strikes may now break out at many different companies.

Aware of this, the government is doing what it can to avert a second general strike. It is likely to retreat from some of its neoliberal attacks—a sure sign of the power that workers have when they unite. 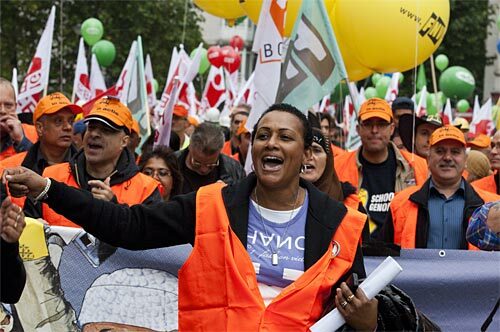