Start of a huge struggle in Egypt

This article is over 13 years, 0 months old
A battle over pay and working conditions in the post office marks a new phase of the Egyptian workers’ movement.
By Mustafa Bassiouny, Cairo
Downloading PDF. Please wait...
Tuesday 11 August 2009

A battle over pay and working conditions in the post office marks a new phase of the Egyptian workers’ movement.

Since the beginning of May, thousands of postal workers have joined picket lines across the country, signalling the start of a hugely significant struggle.

The post office employs more than 50,000 workers across Egypt, many on monthly wages as low as £30.

The trigger for the recent strikes was a new appraisal system imposed in February, which allows managers to sack workers if they receive poor performance reports over two years.

Meanwhile, other groups of workers are also continuing to organise strikes and demonstrations.

The last week of May alone saw strikes at the Nile Cotton Ginning factories, a

The Egyptian tax collectors’ union is calling for international solidarity after state repression of its activists.

The tax collectors have formed the first independent trade union in Egypt since 1957.

“The crackdown of the state came swift, with administrative penal measures, witchhunt, physical attacks, and threats of arrest,” they wrote to Socialist Worker.

The government has also reneged on a promise to pay the social welfare fund. The tax collectors have called a one day protest strike.

Egyptian Revolutionary Socialists’ statement on the massacre of Copts at Maspero 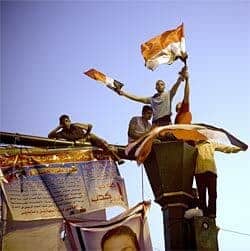 Millions back on Egypt’s streets