This article is over 9 years, 1 months old
Mass demonstrations across Egypt by hundreds of thousands of people have forced Muslim Brotherhood president Mohamed Mursi to withdraw a decree that gave him draconian powers.
By Judith Orr
Downloading PDF. Please wait...
Tuesday 11 December 2012

Mass demonstrations across Egypt by hundreds of thousands of people have forced Muslim Brotherhood president Mohamed Mursi to withdraw a decree that gave him draconian powers.

“This is a partial retreat, under popular pressure,” said Hisham Fouad of the Revolutionary Socialists. “But it doesn’t go far enough.

“And it doesn’t meet the fundamental demands of the movement on the streets, which are to dissolve the Constituent Assembly and cancel the constitutional referendum. More pressure is needed.”

The referendum on the new constitution was still set to take place on Saturday and protests are continuing. Even as he withdrew the decree, Mursi announced powers for the army to have the right to arrest civilians.

The army has shown itself to be backing Mursi. The constitution will entrench its power. Price rises and subsidy cuts are also being pushed through.

“There is a strong connection between these two things,” said Hisham. “More dictatorial laws help enforce the deepening of neoliberalism.

“There is huge anger among the poor and workers that they are being made to pay for the economic crisis. Thousands of workers and the poor are taking part in the protests.”

At the moment it’s the new powers of the state that are driving the demonstrations. “The social issues are not really coming out clearly in the protests,” Hisham added. “Most of the slogans are against the constitution and against the Brotherhood.

“Workers are not participating as a class, but rather as individuals. The independent unions have been supporting the protests from day one.

“They’ve been camped in Tahrir Square with the rest of us, but these are a small number of politicised workers’ leaders, rather than organisations with a mass base.”

This was shown in the industrial textile town of Mahalla at the weekend. “There was a protest by 3,000 or 4,000 people at the local council building on Friday”, said Hisham. “Around 400 or 500 went in and created a revolutionary council.

“This was an initiative of youth activists, although workers participated. Such acts raise the possibility of creating alternatives to the existing authorities.

“However these are still a long way from being realised as such a revolutionary body doesn’t yet have a real popular base.”

Millions of ordinary Egyptians voted for the Muslim Brotherhood. They looked to Mursi to change the conditions of their lives. These protests are part of a process that is exposing the deep contradictions the Brotherhood faces.

Hisham said, “These contradictions will be forced into the open more and more if the level of social struggle rises. We can see the potential for this political battle to transform into a broader struggle.”

The Brotherhood has no solutions to the economic and social crisis except more neoliberalism. Opposition activists set up the National Salvation Front to oppose Mursi’s constitutional changes.

But Hisham explained, “The Revolutionary Socialists are not part of the Front, because it involves elements from Hosni Mubarak’s old regime, such as former minister Amr Moussa.

“It is highly contradictory, including the Popular Socialist Alliance on the far left, to the Free Egyptians on the liberal right. Some of the parties involved are neoliberals, others oppose neoliberalism.” 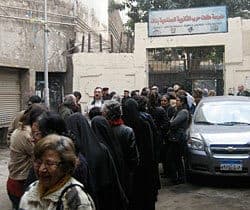 Protests grow during Egyptian poll as socialists call for ‘no’ vote