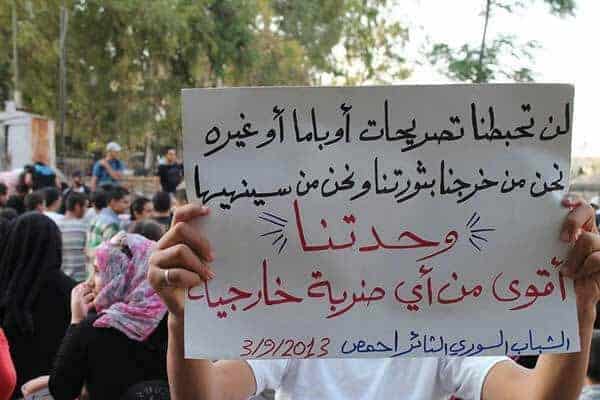 This poster held up on a protest in rebel-held Homs, Syria, reads, “We started our revolution and we will finish it. Our unity is stronger than any foreign strike.”

A growing number of insurgent organisations in Syria have declared their opposition to a US strike on Bashar al-Assad’s regime.

They include Islamist and secular brigades.

The brigades fear that, despite the difficulties many face, any Western intervention will strengthen the regime.

And this comes at a time when the regime is deeply weakened after its sarin attack on rebel-held Damascus suburbs.

The rebels argue that the attack exposed as a lie regime claims that it was a moderate force in the face of growing Islamist-dominated insurgency.

Assad has had some success in painting rebels as jihadis and extremists, and sowing mistrust of the rebels among a population that supported the revolution.

Any Western strike will be widely seen in the Arab world as marking the failure of the revolution. It will help build Assad as an opponent of imperialism, despite widespread revulsion at his regime.

They warn that the West “was intervening to serve its own interests”.

“We reject completely any Western and Russian interference in the Muslim world”, the statements said.

One fighter in Homs said, “Why are they now making red lines, why not when Assad used Scud missiles?

“When he bombed churches? When he destroyed our cities and our neighbourhoods?

Another said, “We have over 100,000 martyrs. Now they object because of chemical weapons.

“We know that this is a pretext for them to interfere in our country to end out revolution and attack the revolutionaries.”