This article is over 12 years, 8 months old
"Surrender or die" – that was the ultimatum from the Sri Lankan government after the Liberation Tigers of Tamil Eelam (LTTE) declared a unilateral ceasefire earlier this week.
By Ken Olende
Downloading PDF. Please wait...
Tuesday 28 April 2009

“Surrender or die” – that was the ultimatum from the Sri Lankan government after the Liberation Tigers of Tamil Eelam (LTTE) declared a unilateral ceasefire earlier this week.

The Sri Lankan army had retaken nearly all the territory that was controlled by the LTTE as Socialist Worker went to press.

This “victory” was at the cost of the lives of thousands of civilians herded into the government designated no-fire zone and then bombarded by the military.

The Sri Lankan government instructed the military “to end the use of heavy calibre guns, combat aircraft and aerial weapons which could cause civilian casualties” on Monday.

This turned out to be a propaganda error – as the military had already claimed that it stopped using such weapons weeks ago.

The government accused the LTTE of keeping Tamil civilians as hostages and murdering people trying to flee their control – but it also made sure that no journalists could get into the combat zone to see for themselves.

The Sri Lankan state’s accusations sound remarkably similar to those of the Israeli government when it falsely accused Hamas of firing on Palestinian civilians during the recent assault on Gaza.

Up to 300,000 refugees are living in terrible conditions. The government says it will move them to internment camps behind razor wire for “screening” before resettlement.

Deirdre McConnell, from the Tamil Centre for Human Rights in Manchester, spoke to Socialist Worker.

She said, “This armed conflict has been going on for nearly three decades. I have my doubts as to whether this military conflict will permanently end.

“In 1987 the LTTE was forced into the jungle by Indian ‘peace keeping’ troops and then fighting continued from there.”

Balamuhunthan is one of the protesters in London’s Parliament Square, where a hunger strike is ongoing. He grew up in Denmark and studies in east London.

He told Socialist Worker that he has lost scores of relatives in Sri Lanka. He said, “The protest here was very spontaneous.

“There’s a Tamil society in every university. We always said that we want to do something – but we never said when or where. I’ve only been to Sri Lanka once, in 2004 during the ceasefire. It’s a lovely country, but we have to expose the bad things that are happening there.

“The IMF has just given Sri Lanka a loan of $1.9 billion. The Sri Lankan government says it needs the money to repair destruction from the 2004 tsunami, but they have already spent more than that on rearming.”

Deirdre explained, “As far as Sri Lanka is concerned the ceasefire was always only a paper exercise. There were violations – and justifications of the violations.

“Outside the north east, apart from the Tamil people, it was mostly the working class that was affected by this conflict.

“In the south, Sinhalese from remote villages have been conscripted into the Sri Lankan army to fight and die in this war.

“Even during the ceasefire hundreds of thousands of internally displaced persons (IDPs) never saw a significant change in their appalling living circumstances.

“There are people who have been displaced for more than two decades within the Jaffna Peninsula itself. I visited those IDP camps personally.”

While Sri Lanka’s Tamil population is concentrated in the area formerly controlled by the LTTE, there are Tamils across the country.

Deirdre told Socialist Worker that the Tamils face discrimination at the hands of the Sri Lankan government. “Tamils were living in turmoil long before the armed conflict began,” she said.

“They are intimidated, obliged to register with the nearest police station, face abductions, disappearances, arbitrary arrest and much discrimination.”

Deirdre said that there is also a problem with the treatment of refugees in Europe.

“In 1984, and the period immediately after, some refugees were deported from Western countries and had serious problems as soon as they arrived in [the capital] Colombo. Other cases are still pending in the European Court of Human Rights.

“And it isn’t only Tamils who have to flee. There are still Sinhalese and Sri Lankan army deserters seeking asylum in Western countries.”

Tamil refugee: ‘I had to flee with nothing’ 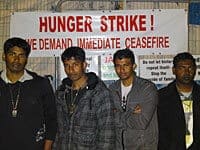