Tensions in Tahrir Square as Egypt prepares for referendum

This article is over 9 years, 8 months old
Judith Orr reports from Cairo on the mood among protesters at the eve of Egypt’s constitution referendum
Downloading PDF. Please wait...
Friday 14 December 2012

Banners hang across the streets and graffiti covers the walls in central Cairo. The centre of Tahrir Square is occupied by protesters. It’s the day before the first day of voting for a new constitution in Egypt—and tension is high.

The slogans in Tahrir directed against Egypt’s president Mohamed Mursi—“just leave!”, “go now!”—echo those of the 2011 struggle that brought down dictator Hosni Mubarak.

Under pressure from protests across Egypt, Mursi last week withdrew a decree that granted him exceptional powers. But he is intent on pushing through a constitution that entrenches his powers and preserves those of the army, big business and the rich.

The vote will be taking place on Saturday in some areas tomorrow and in a week’s time in others. Many Egyptians worry that this process will open the door to vote rigging.

Mursi has given the military the right to arrest civilians until the constitution is in place. Soldiers and police will be deployed at polling stations—allegedly to ensure the referendum is fair, Mursi claims.

In Tahrir there are makeshift barricades on the main roads stopping most traffic. Tea stalls are scattered all over what would normally be a roundabout filled with traffic. Plastic chairs are neatly laid out for each stall, or in front of stages that host sporadic speeches and music.

The central reservation is dense with tents—you have to pick your way through a spider’s web of guy ropes. People sit around small fires, surrounded by slogans on posters or sprayed on their tents. They drink tea, read newspapers. One woman is mending some clothes. Some have been here for 21 days. 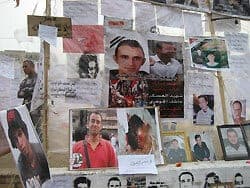 They have been here before and they are determined not to let their revolution be derailed. “Here in Tahrir I am happy” said one elderly man in front of his small tent.

One area is a memorial to the martyrs with photos, stories and flowers. The new names and images of those who have been killed in the last fortnight have been added to the list of those killed since the 25 January 2011 revolution.

Many are keen to stress that this latest struggle is not about religion. “Christians in Egypt have much to fear if this constitution goes through—and they shouldn’t have to be worried” said Mohi, “But I am a Muslim and I am also against it. We don’t want this constitution.”

The Revolutionary Socialists are campaigning for a no vote in the referendum. “We were out till late last night giving out pamphlets and leaflets in different areas of Cairo,” said Hatem. They will be working through to the last minute to get the word out. 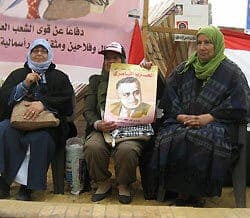 “This is more important even than the vote for president” said Akram, who works a few minutes from Tahrir, “If this gets through we could be living under it for a long time. We have to stop it”.

Back in the square three middle aged women sit in front of a banner of Egypt’s former nationalist leader, Gamal Abder Nasser. They have been here for three days. “We have to stay here to stop Mursi, he is not good for Egypt,” said Samira.

“This is not what the revolution was for” said Akram. “Whatever happens, Mursi will protect himself. We are looking to make our life better. He should respect the revolution.”

Rage and repression after Israeli attack

Egypt: who will stand in election? 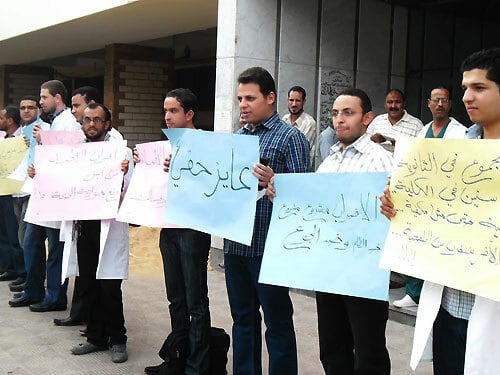 Doctors in Egypt strike to demand more spending on healthcare