The occupation and oppression of Kashmir

This article is over 16 years, 2 months old
The state of Jammu and Kashmir, where most of the casualties caused by the earthquake occurred, has been a bone of contention between India and Pakistan since 1947. India was partitioned by the British after a long fought freedom struggle.
By Murtaza Ali and Dr Shabir Choudhry
Downloading PDF. Please wait...
Saturday 22 October 2005

The state of Jammu and Kashmir, where most of the casualties caused by the earthquake occurred, has been a bone of contention between India and Pakistan since 1947. India was partitioned by the British after a long fought freedom struggle.

The Indian independence act of 1947 released all the princely states from their obligations to Britain. But they were urged to accede to either India or Pakistan or make some other arrangement with them, before the lapse of the British rule on 15 August 1947.

Jammu and Kashmir did not accede to either of the countries and when British rule lapsed, technically and legally it emerged as an independent state. The fact that it was not recognised does not mean that it had not acquired that status.

The state of Jammu and Kashmir is important to both India and Pakistan because of its strategic position and wealth of resources. Both want to acquire it or at least settle for the status quo.

Both countries have gone to war over the control of this state, the inhabitants of which are forcibly divided between India and Pakistan, giving rise to serious human rights abuse on both sides of the divide.

The existing situation keeps the state divided, though this is universally opposed by the state’s population.

The state of Jammu and Kashmir is multilingual and multi religious state, and the issue here is not of a religion (although some fundamentalists on the behest of Pakistan like to present this image), but right of self-determination which has been denied by both governments under one pretext or the other.

The overwhelming majority of people want to become independent, and don’t want to join either India or Pakistan.

In the aftermath of the earthquake tens of thousands of hapless victims were crying for days under the damaged buildings and devastated dwellings. There are thousands of dead bodies still to be evacuated.

Those that have been found alive are still uncared for, they are hungry, needy, thirsty, and desperate. The pronouncements of tin-pot Pakistani army rulers and their civilian sidekicks are no help to these people.

Murtaza Ali, a London based journalist who comes from the worst affected Bagh District, and Dr Shabir Choudhry, the chair of the Diplomatic Committee of Jammu & Kashmir Liberation Front (JKLF) 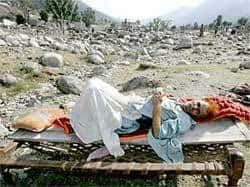