The poor bear the brunt of misery after Nepal’s earthquake

Tens of thousands of Nepalis who survived last week’s earthquake but lost their homes are now in desperate peril.

The United Nations estimates that eight million people are affected by the earthquake. As many as 4,000 people were confirmed dead when Socialist Worker went to press. The total is expected to be much higher.

Health services are on the brink as hospitals run out of medicines and beds. Clean water and basic sanitation are fast becoming rare commodities, threatening a wave of disease to follow the aftershocks of the quake.

For many of the families now sleeping in the open, the best shelter they can hope for is a tent or plastic sheeting strung between trees.

Commentators haven’t waited long to place the quake in the category of a “natural disaster”.

They imply that little could have been done to prevent the loss of life because the movement of tectonic plates is not something that humans have any control over.

It’s an argument that’s rolled out after every flood, hurricane or tsunami—and it’s one designed to let the system off the hook.

Seismologists have predicted a massive quake in Nepal since 2013. The country is said to have 92 active fault lines.

Yet despite the warnings even the most basic measures, such as strengthening building structures, was largely left undone.

And there’s nothing “natural” about the way it is the poor who bear the brunt of the misery.

The damage reports from the capital Kathmandu show one thing clearly. Those packed into old, brick-built slums were far more likely to die than those in flats made with steel and concrete.

Arial drone footage of the city shows collapsed piles of red rubble next to modern white blocks that remain standing.

Many young Nepalis are forced by poverty to work abroad. Some 1,500 of them left Nepal every day to look for work last year.

Nepal is overwhelmingly rural, with many remote villages unconnected by road and unreachable by helicopters transporting aid.

No one yet knows the full extent of the damage done there.

Less than a decade ago these villages provided many fighters for the Maoist guerrillas struggling against the rule of King Gyanendra and his army.

And given the disdain with which the Nepali ruling class regards the countryside it seems unlikely they will rush to its aid.

In 2006 huge numbers in both cities and rural areas celebrated the collapse of the king’s regime.

Two years later many hoped that the Communist-led left would use its election victory to relieve poverty and modernise Nepal.

But those hopes faded as one-time guerrilla fighters became immersed into the state and indistinguishable from the corrupt politicians they had set out to replace.

But never has there been a time when the left in Nepal needs to remember its mission more—a revolution of the poor across Asia.

From the Socialist Worker archive –  political crisis deepens in Nepal 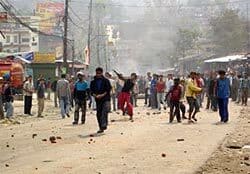 General strike for democracy brings Nepal to a standstill