‘This is victory’ say Cancun protesters

This article is over 18 years, 4 months old
PROTESTERS celebrated the collapse of World Trade Organisation (WTO) talks in Cancun, Mexico, on Sunday as a defeat for the global corporations and the world's most powerful governments. Commentators in Britain, from the Guardian to former New Labour minister Clare Short (masquerading in Cancun as a BBC reporter), argued that the Cancun collapse was a 'blow to the world economy' and a 'setback for the world's poor'.
By Paul McGarr
Downloading PDF. Please wait...
Saturday 20 September 2003

PROTESTERS celebrated the collapse of World Trade Organisation (WTO) talks in Cancun, Mexico, on Sunday as a defeat for the global corporations and the world’s most powerful governments. Commentators in Britain, from the Guardian to former New Labour minister Clare Short (masquerading in Cancun as a BBC reporter), argued that the Cancun collapse was a ‘blow to the world economy’ and a ‘setback for the world’s poor’.

Those actually representing social movements from the world’s poorer countries, and who had played the key role in organising the protests in Cancun, held a very different view. Walden Bello of Focus on the Global South is a leading figure in the worldwide movement against corporate globalisation. He declared that the collapse was ‘a victory for the people of the developing world’. Anuradha Mittal of the Food First campaign organisation said, ‘This victory is for the working poor, family farmers, farm workers, the indigenous, the poor and for immigrants all over the world.’ Representatives of the world’s governments met behind police lines and wire fences in the luxury holiday complex of Cancun.

Outside thousands of protesters held debates and forums, and twice over 10,000 people marched to the security perimeter and tore down the steel fencing. The size of the protests was impressive. The Mexican government (run by a former Coca-Cola executive) had barred entry to the country to many activists.

The Social Movements Network, the umbrella group for those who organised the protests, issued a common statement from Cancun titled ‘Down with the WTO and Permanent Wars’. The protests, it said, were against ‘a WTO that together with the transnational corporations, the World Bank and the International Monetary Fund, is a weapon of mass destruction of the lives of the people’. It stated the protests were against ‘a WTO that puts profit over people and their needs and that puts social justice under the laws of the market, that privatises (steals) natural resources and privatises public services’.

But the statement concluded, ‘Our struggle does not end today and does not end in Cancun. It is permanent. We need to keep on fighting against the neo-liberal policies, the governments which implement them, the international financial institutions and the transnational corporations.’ Making the link between the fight against corporate globalisation and imperialist war, the statement ended by declaring: ‘We are not commodities. We are not for sale. Another world is possible. Down with the WTO. End the wars.’

THE demonstrations outside fuelled bitter divisions inside the World Trade Organisation, in a repeat of the Seattle WTO meeting. There were rows over agriculture between the US, European Union and the G22-a group of food-exporting countries led by Brazil, China and South Africa.

Another major row centred on a demand by the US and European Union, acting on behalf of the global corporations, for a new agreement in investment. The proposed agreement was essentially a rehash of the Multilateral Agreement on Investment (MAI) defeated by a worldwide campaign several years ago.

Like the MAI, the deal being pushed at Cancun was aimed at giving multinationals a free hand and banning government restrictions on their activities.

A PROTEST march on Wednesday of last week confronted riot police and the steel barrier behind which WTO delegates were meeting. During this Lee Kyung Hae, a 56 year old Korean farmer, stabbed himself to death in protest at the impact of the ‘free’ trade policies pushed by the WTO.

Anuradha Mittal of Food First reported, ‘About 14,000 farmers and indigenous peoples, with the delegation of South Korean farmers carrying a coffin, marched. They were stopped at the police barricades. While the sign boards welcomed visitors to the resort city of Cancun, barriers and a massive security deployment kept them more than six miles away from the convention centre, where ministers from the 146-member WTO started the ministerial to further their free trade agenda. The Korean farmers rammed the coffin into the steel barricade. Chanting ‘Death to the WTO!’ the farmers broke down and toppled part of the barricades. Then the Korean farmers burnt the American flag, the sign of imperialism, and a symbol of the coloniser of the poor, the indigenous, the starving and homeless the world over.Lee Kyung Hae climbed up with his banner and stabbed himself, protesting the free trade agreements which have enslaved our food producers.’

Lee, 56, had said, ‘Human beings are in an endangered situation’ because of the activities of ‘uncontrolled multinational corporations and a small number of big WTO members’.

The Social Movements Network, which organised the Cancun protests, issued a declaration: ‘The death of Lee is a cry of the excluded.’ On Saturday thousands more-farmers, students, trade unionists and others-then marched on the Cancun summit chanting ‘We are all Lee Kyung Hae!’ Peter Rosset of Food First reported, ‘Saturday was the most incredible day of protest.’

He described how ‘thousands of people of all nations and cultures’ joined the protest. When they reached the steel barriers around the summit, ‘quite literally the power of the people united pulled down the walls of the WTO’. Gabriel Furshong was also on Saturday’s protest and e-mailed Socialist Worker from Mexico: ‘I have just returned from the march. For the last 48 hours or more security forces have been constructing a new set of barriers, stronger and longer than the last. All witnesses agreed it was an impressive structure, one which would not fall victim to the same fate as that which protesters took apart on Wednesday. Nevertheless, led by Korean farmers, thousands marched this morning for an end to the WTO. We arrived at the fence and we tore it down.’ 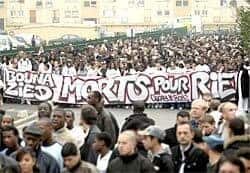