This article is over 16 years, 4 months old
Mike Gonzalez looks at the choices ahead for the movement in Venezuela
Downloading PDF. Please wait...
Saturday 27 August 2005

In the seven years since he was first elected to Venezuela’s presidency, Hugo Chavez’s government has faced three direct challenges.

On each occasion — the attempted military coup, the bosses strike and the recall referendum — the opposition failed.

Each of these victories was won by mass mobilisations of ordinary Venezuelans who successfully defended Chavez.

There is a logic in all this that is inescapable. Chavez has taken his Bolivarian revolution forward in important ways. But this has been possible only because mass movements have beaten back the right.

Earlier this year Chavez announced that the Bolivarian revolution was socialist. This was an encouragement to the mass movements in countries such as Bolivia and Ecuador. Yet inside Venezuela itself, the situation is much less clearcut.

Elements of industry have been taken into state hands and a new TV station has been created to broadcast the views of the Bolivarian revolution.

And yet Venezuela’s banks remain in private hands and are earning substantial interest from loans to the government.

Private ownership of industry and land has not been threatened and the media corporations that have been at the centre of the mobilisation of the right remain untouched.

Within his government, Chavez has retained many of the people who enjoyed the privileges and corruption of the old Venezuelan political system.

While support for Chavez is solid and growing, the grassroots organisations that have grown up in the defence of the Bolivarian revolution have expressed increasing frustration and discontent at the limits placed on their activity.

The revolution, it seems, rests on these forces — yet power does not lie with them but in the structures of government.

In the new trade union federation (UNT), formed to replace the thoroughly corrupt CTV, the debate is urgent.

At a meeting in July, 400 delegates, most from the UNT, argued that a socialist process must be one in which power moves into the hands of the working class.

There is another view of what socialism means, of course. Spain’s president, Zapatero, is an enthusiast for Chavez, but his Socialist Party is an advocate of the reform of capitalism and a supporter of the market.

It seems that two visions of socialism are at work within the Venezuelan revolution. One is concerned with reforming and humanising capitalism and renegotiating the relationship with the world market from a position of strength.

The other is a vision of a society whose resources are controlled directly by those who produce them and where no private interests can shape and determine the lives of millions.

The battle between those two visions is the reality of the Bolivarian revolution.

Mike Gonzalez is the author of Che Guevara and the Cuban Revolution, available from Bookmarks. Phone 020 7637 1848 or go to www.bookmarks.uk.com 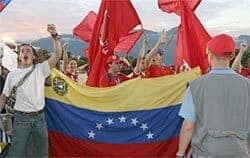