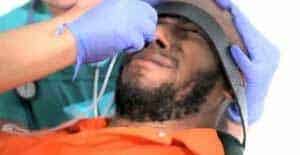 The US is refusing to stop the force-feeding of 45 Guantanamo detainees through the annual Muslim fast of Ramadan. The men are among 106 detainees who are on hunger strike in protest at being held in the prison for years without trial.

For many this is the 12th Ramadan they have spent in prison. Many have been on hunger strike since February.

The US claims it is respecting the daylight fast by only force-feeding detainees at night. But any force-feeding has been widely denounced as inhumane and an insult.

Medical staff insert a tube into a hunger striker’s nose. It is then slid down into the stomach. Detainees are shackled and a mask is placed over their mouth during the procedure.

One hunger striker had to be admitted to hospital recently when the feeding tube was inserted into his lungs, rather than his stomach.

Force-feeding can take up to half an hour. Prisoners are made to stay restrained for up to two hours while medical staff carry out x-rays to confirm the force-feeding has worked. If prisoners resist being fed and bite the tube, a guard will hold their head until their jaw becomes weak.

US rapper Mos Def, real name Yasiin Bey, has made a video with human rights group Reprieve where he attempts to recreate the force-feeding process. When the tube becomes dislodged, he is unable to continue with a attempt to reinsert it.

Shaker Aamer from London has been in Guantanamo without charge for over 11 years. He told the Guardian that prison officials are stepping up tactics to break the hunger strike.

An extra 40 medical staff and nurses have been brought into the prison since prisoners began their hunger strike. Shaker said that nurses are removing their name tags so that prisoners can’t identify them.

That way, prisoners won’t be able to make complaints about them for brutal treatment.