This article is over 12 years, 1 months old
There was never any possibility that last weekend’s Honduran presidential election would be legitimate.
By Mike Gonzalez
Downloading PDF. Please wait...
Tuesday 01 December 2009

There was never any possibility that last weekend’s Honduran presidential election would be legitimate.

The same government that ousted the elected president Manuel Zelaya in a military coup five months ago oversaw the election of right wing candidate Porfirio Lobo.

Zelaya could not be a candidate as he has already served a term as president.

He remains trapped inside the Brazilian embassy in the Honduran capital, despite having made a series of concessions to his opponents.

Months of negotiations, brokered by the US, legitimated the coup by presenting Roberto Micheletti, installed as president after the coup, and Zelaya as equals.

The US has cemented the coup by recognising the elections and accepting Lobo as the new president.

The National Front for Resistance—which has protested against the coup for the last five months—called on people to abstain from voting in the presidential elections. The call was answered on a massive scale.

Honduras has seen the growth of an extraordinary mass resistance movement in the face of repression.

Whatever the fate of Zelaya, in the course of these last months, the Honduran people have begun to forge a powerful instrument for the struggles to come. 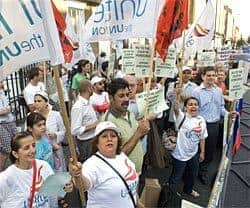 Thousands resist the coup in Honduras