The protests to defend a woman's right to choose came after the US Supreme Court signalled it could overturn Roe v Wade
Downloading PDF. Please wait...
Saturday 14 May 2022

Thousands of abortion rights protesters started a “summer of rage” on Saturday with marches and rallies across the US. They demonstrated in almost 400 towns and cities under the slogan of “Bans Off Our Bodies”.

In Ohio, many people carried homemade placards such as, “You can’t ban abortions, you can only ban safe abortions.”

In Austin, Texas, demonstrators stood at the steps of the Capitol building banging drums, singing and repeating the chant, “Abortion is a human right.” Thousands marched in New York. In Washington DC, Rachel Carmona, executive director of the Women’s March, said, “If it’s a fight they want, it’s a fight they’ll get.

“We have to see an end to the attacks on our bodies,” Carmona added. “You can expect for women to be completely ungovernable until this government starts to work for us.”

Teisha Kimmons travelled 80 miles to join a rally in Chicago. She said she fears for women in states that are ready to ban abortion as soon as the Roe v Wade legal decision is overturned.

She said she might not be alive today if she had not had a legal abortion when she was 15 years old. “I was already starting to self-harm and I would have rather died than have a baby,” said Kimmons.

Many marchers were veteran protesters who recalled the time before legal abortions in the US.Betty Linville, who lives in Koreatown, attended the rally in Los Angeles. “I have memories of women and men fighting for abortion rights 50 years ago,” Linville said.

She now worries the “incredible freedom” of legal abortion was in jeopardy. And that’s especially for women who lack the means to travel from a state where it is banned to one where it is allowed. “What is next?” Linville said. “What else is going to be taken away?”

Luna Hernandez with Rise Up 4 Abortion Rights, an organiser of Los Angeles rally, said, “Only the people can stop this. We have to refuse to allow this. This has to be a turning point, it’s not a done deal.”

Protest organisers are planning more action in the weeks ahead. The marches are so far smaller than those that confronted Donald Trump’s election and inauguration. It’s crucial the movement organises in the streets rather than being lulled into believing that the Democrats will defend women’s rights. 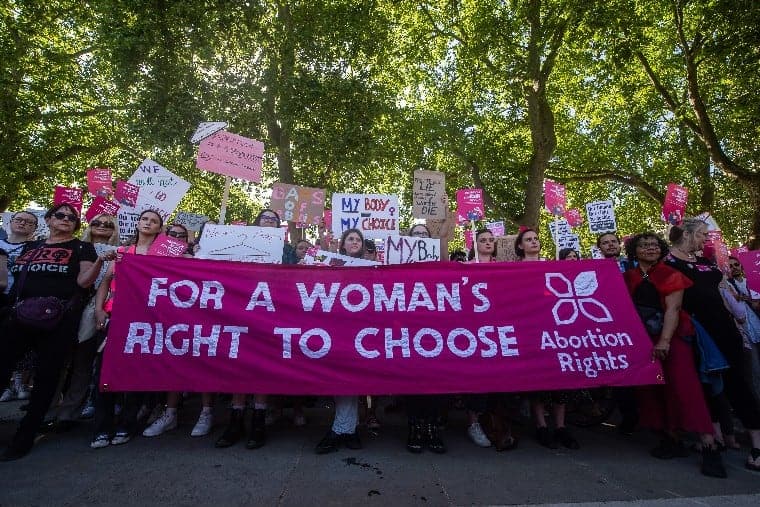 Solidarity protest marches on US embassy in London

Up to 500 people joined an Abortion Rights protest in central London on Saturday in solidarity with marches in the US.

Raquel, who is originally from the US, attended the protest. She reacted with “frustration and deep concern” when she heard that the US Supreme Court was looking to overturn Roe v Wade. “If Roe v Wade is overturned, women and their families will suffer,” she told Socialist Worker. “Women will be forced to induce abortions at any cost.”

Anna, also from the US, said she felt “disbelief and anger.” “In a worst-case scenario, this will have a domino effect with abortion and other women’s rights being attacked again and again,” she told Socialist Worker.

Raquel and Anna both argued that you couldn’t rely on the Democrats to fight for abortion rights. “For Joe Biden abortion is just political,” said Raquel. “He’ll think if he supports abortion rights wholly, he’ll lose support. This is why it took so long for him even to say the word abortion.”

Anna added that Biden and Democrats “weren’t doing enough.” Protesters gathered in Parliament Square in central London and then marched to the US embassy. They chanted, “Whose rights? Our rights,” and, “Bans off our bodies.” Activists from the Unison union joined the protest.

Lucy from the Abortion Rights UK group told Socialist Worker that fighting for abortion rights in the workplace is vital. But she also added that some corporations are using abortion rights to seem more progressive.

“Amazon is saying that it will reimburse women who travel for abortions,” she said. “This is not because they are concerned about women. They just don’t want to pay maternity leave or support pregnant women. This is the same company where women have literally given birth on the job.”

She added that fighting for women to have safe access to abortion without fear of intimidation in Britain is an important battle. “Women are still getting physically attacked outside abortion clinics by anti-choicers, and it’s not illegal,” said Lucy. “We need to campaign for buffer zones for women to be able to access services.”

Speakers from several women’s liberation and anti-racist groups spoke at the beginning of the protest. Fiona from the Black Liberation Alliance said, “Abortion bans will disproportionately affect black women. They are three times more likely to die in childbirth than their white counterparts.”

Kerry Abel, chair of Abortion Rights UK, said, “We need to continue to protest and be visible and noisy. We have the power to push back repressive abortion laws. In recent years, we fought and won to make sure women could still have at-home abortions. We won the decriminalisation of abortion in Northern Ireland. We have to keep campaigning for abortion rights everywhere. There can be no return to the backstreets.”