Two hurricanes have torn apart Puerto Rico. Some 15,000 people have had their homes destroyed or are living in shelters with little food or water. Around 97 percent of people have no power.

The US is largely to blame for the social catastrophe that has followed the hurricanes.

The island has debts of over £50 billion. It will never be able to pay that off, held permanently in submission to the whims of the US and its other creditors.

Racist US president Donald Trump has contrasted the impact of the hurricanes in Puerto Rico with that in US states.

“Texas & Florida are doing great but Puerto Rico, which was already suffering from broken infrastructure & massive debt, is in deep trouble,” he tweeted earlier this week.

Trump said the island’s debt “must be dealt with”. This implies that help for people whose houses had been destroyed is conditional on the country paying back the debt.

It’s a bit rich coming from Trump. A golf course in Puerto Rico previously owned by him went bankrupt in 2015, leaving almost £25 million in unpaid bills.

Trump has ordered US troops to get involved in the “relief” effort. The real reason for that may be to put down any potential unrest. Less than a month before the hurricane struck, hundreds of people marched in the country to protest against austerity, changes to pensions and redundancies.

US general Richard Kim is set to have power to rule over the governor Ricardo Rossello. But there is unlikely to be friction between the two. Rossello said yesterday, Friday, that “Trump has listened to our petitions”.

The 20th resident commissioner of Puerto Rico, Jenniffer Gonzalez Colon, represents the island in Washington. She thanked Trump for his “support”.

Meanwhile homeland security secretary Elaine Duke celebrated the US response to the disaster as a “good news story”.

Puerto Rico has effectively been a US colony since 1898. People living on the island have been US citizens since 1917, but are excluded from voting in US federal elections. Yet the US can overturn almost any decision made by the island’s governor.

The US has a particularly brutal history in Puerto Rico. It promoted and funded a sterilisation campaign between 1936 and 1968 that sterilised around a third of Puerto Rican women.

A nationalist uprising of 1950 was brutally put down, with most of the participants either killed or imprisoned. Its leader, Pedro Albizu Campos, was exposed to radiation while in prison.

Puerto Rico is being punished 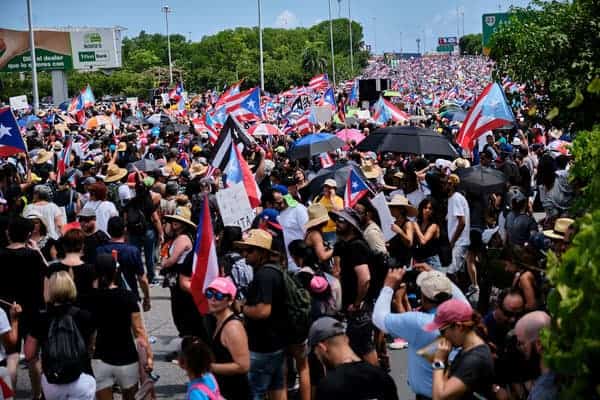 ‘We’ve risen up against corruption and austerity’, Puerto Rico protesters speak out