This article is over 7 years, 8 months old
Euro elections showed a swing to the left and a mood for a fightback, reports Panos Garganas
Downloading PDF. Please wait...
Tuesday 27 May 2014 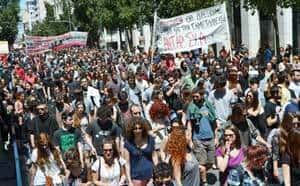 The future of the Greek government is in question after the elections.

The polls showed a swing to the left and a big drop in votes for the Tory-type New Democracy and Labour-style Pasok parties.

Syriza, the coalition of the radical left, came top of the European polls. This vote is a result of more than two years of workers’ struggle against the government’s austerity.

The Nazi Golden Dawn won three MEPs while several of its leadership are in prison or facing criminal charges.

New Democracy is trying to argue that the European elections are not about the government. But it and its Pasok partners in government are under pressure.

The European elections result is a double blow only a week after the government suffered defeats in the local elections.

Syriza also won a victory in the second round of local elections in Attica, the mainly working class area around Athens. In Athens it came very close to winning.

The Communist Party vote went up but its sectarian attitude meant that it argued against voting for Syriza in the second round.

Many Communist Party voters transferred their votes despite this.

The Socialist Workers Party’s sister organisation in Greece is part of the anti-capitalist Antarsya.

Its vote was squeezed by the drive to get a Syriza vote big enough to shake the government.

So we won 40,000 in the European elections, having won 130,000 in the local elections. But we believe there is a big audience out there sympathetic to the far left.

The question is whether the vote translates into a drive to organise and resist or whether people sit and wait to see what politicians do.

We have a fight to isolate Golden Dawn. This won’t be automatic. We cannot leave it to the courts. In the past election success for Golden Dawn has led to a rash of racist attacks. This is a danger.

The government claims that the worst of austerity is over. But everyone knows that its only agenda is more cuts.

The government is committed to producing a budget surplus by this autumn.

This is part of its deal with the “Troika” to ensure the European banks get their debts repaid.

At the moment there are struggles to stop school closures. There is also a big fight about redundancies in the civil service.

Most notorious of these are for cleaners in the Ministry of Finance, mainly women.

They occupied the Ministry’s entrance just before the election in protest.

The message is clear. If we want rid of this government we can’t wait—we have to organise a fightback now.