Wall Street occupation inspires resistance across the US

This article is over 10 years, 3 months old
A left wing protest movement in New York has captured the imagination of ordinary people across the US.
By Anindya Bhattacharyya
Downloading PDF. Please wait...
Tuesday 04 October 2011

A left wing protest movement in New York has captured the imagination of ordinary people across the US.

The Occupy Wall Street movement set up camp on 17 September with only a few hundred people. Since then it has grown in numbers and broken into the mainstream US media.

A brutal police clampdown at the weekend drew further attention to the extraordinary scenes in Manhattan. Now similar protests are springing up across the US.

Mary Clinton, a student based in New York and a participant in Occupy Wall Street, spoke to Socialist Worker. “I’m involved with the labour outreach committee, which builds links between the occupation and organised workers,” she said.

“We’re mobilising for a huge march on Wednesday of this week that will bring together labour and community groups with Occupy Wall Street.

“We need labour union support in order to build momentum. At first there was a lot of curiosity but also wariness from the labour movement. But we’ve managed to persuade people that Occupy Wall Street is something they want to get behind.”

Protesters have put together a busy programme of marches and demonstrations to draw attention to their action.

Those marches met a heavy-handed response from the police, but one that has only strengthened the protesters’ resolve, says Mary. “The police reacted brutally—there was a ton of arrests, lots of pepper spray.

“A lot of ordinary Americans were shocked to see this kind of brutality in their backyard. People think we have the right to voice our opinions—so to see videos of mass arrests and so on is really powerful.

“Some 700 of us were arrested last Saturday. It was a pivotal moment for us. We had to organise medical attention, food and water for some of those arrested. It created a strong sense of solidarity.”

The occupation is based at Zuccotti Park, a privately owned park in Lower Manhattan. But protesters have reverted to its previous name—Liberty Plaza—partly as a reference to Tahrir Square in Cairo (“tahrir” means “liberation” in Arabic).

“There’s hundreds sleeping out every night,” says Mary. “The weather right now is beautiful, but it’s going to get colder. I’m from the Midwest so I’m pretty used to extreme weather—I’m hoping people here will toughen up!”

The occupation’s processes are a work in progress. “It’s non-hierarchical,” says Mary. “Individuals who see a need or an opportunity come together to form a working group.

“Working groups then report back to the general assembly. Things happen spontaneously, but in an organised fashion.”

Protesters initially got around a media blackout by using the internet and alternative media sources. “Everybody’s got cameras on their cellphones so we can develop our story without being dependent on mainstream media,” says Mary.

“But we were on the front page of the New York Times on Saturday and that was good for getting the word out.”

More than 70 cities across the US now have planning processes or are organising their own occupations.

“It’s really inspiring to know that’s going on. We’ve had an Arab Spring. Now we’re hoping for an American Fall—and the fall of the American empire.”

‘Austerity measures affect all of us’

The US economy has not been immune from the financial crisis. Earlier this year president Barack Obama announced savage cuts to welfare services in order to meet Republican demands for a “balanced budget”.

This has had a profound impact on the lives and political attitudes of ordinary Americans, says Mary.

“The occupation has struck a chord,” she says. “The cuts and closures to social services and education have been hitting a lot of people.

“We talk about how we are the 99 percent and they are the 1 percent—the financial and real estate industries that are running the government.

“People can’t pay their mortgages and have lost their homes, yet Wall Street and the banks got bailed out. So there’s a strong sense that we want to take our country back.

“Student debt is a huge issue—it’s higher than credit card debt. We were told to go to college, that it would pay off when we got a well-paid job. But we’re just not seeing those jobs.

“Meanwhile there are cuts to schools, fire services, all the social services we depend upon. People get that—and it has inspired people to fight back.”

Mary said the protesters were inspired by the struggle in Wisconsin earlier this year, when striking workers occupied the state capitol to defend their trade union rights.

“It didn’t start with the occupation of Wall Street and it won’t end here either. This has inspired people across the country, and it’s so rewarding to be part of something bigger than myself.

“Nobody can predict the revolution awakening. We’ve yet to see where this will go, but I’m looking forward to finding out.”

• Some 700 pilots from United and Continental Airlines marched down Wall Street, protesting about their contracts. The Transport Workers’ Union, the United Federation of Teachers and the Service Employees International Union are among unions backing a march on Wednesday of this week. 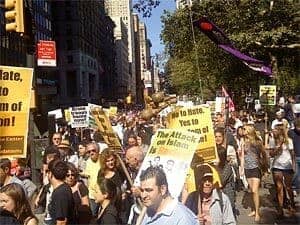 New York stands together against Islamophobia

The power of profit switches lights off in the US 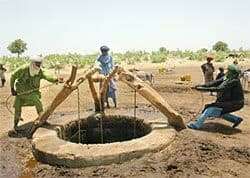