THE MOST common sight in southern California these days isn’t a movie shoot or a beach party. It is a militant picket line.

From Malibu to the Mexican border, 70,000 supermarket workers, two thirds of them women, have been on strike or locked out since 11 October. More than 850 individual stores are involved. It is the biggest private sector union dispute on the West Coast since the Hollywood general strike of 1946.

Moreover, no strike in modern history, including recent shutdowns of bus transport and schools, has so comprehensively affected the general public. Almost every one of the region’s 20 million residents has had to wrestle with the personal moral decision of whether or not to cross a picket line.

The issues are stark. The strikers, represented by the United Food and Commercial Workers (UFCW) union, are resisting a brutal attempt by California’s three largest supermarket chains to dismantle their contractual health benefits and roll back the wages of newly hired workers.

The terrain is local but the issues, above all healthcare, are national. As labour historian Nelson Lichtenstein told the Los Angeles Times, ‘The national labour movement certainly sees this as a decisive event which will set the course for social policy in the US for many years to come.’

The US, of course, is exceptional amongst rich industrialised nations for the absence of any universal entitlement to healthcare. Union membership, rather than citizenship, has traditionally provided access to subsidised medical treatment.

But with unionism shrunk to under 9 percent of the private sector labour force and with medical costs skyrocketing, a huge and growing share of most family budgets must be diverted to the purchase of membership of a so called ‘health maintenance organisation’ (HMO).

A large minority of working families, however, cannot afford to join a private HMO. Los Angeles County, the nation’s sweatshop capital, is a shocking case in point. An incredible four million residents are uninsured and lack elementary medical or dental care.

In life-threatening situations, they crowd the emergency rooms of an underfunded and collapsing county hospital system. Angry physicians have recently testified that patients are routinely dying for lack of attention or access to proper medical technology.

The retail sector is the ‘Third World’ of the US economy and contains the highest percentages of low-wage, short term and uninsured workers. Unionised supermarket workers are the dramatic exception and their wage-benefit package has been a powerful beacon to the unorganised.

This is not to say that UFCW members are aristocrats of labour. Most struggle to get by on average wages of $12 to $14 an hour. But their comprehensive benefits provide a family health security that most non-union workers can only dream about.

However, the major current trend in US industrial relations is for large corporations to jettison their healthcare obligations. Their model is that modern colossus of super-exploitation and greed-Wal-Mart.

Indeed, the supermarkets’ public explanation for demanding give-backs from UFCW is Wal-Mart’s imminent invasion of California. The non-union retail giant, one union official explains, is ‘the third party that now comes to every bargaining situation’.

The three grocery chains claim that without major concessions from the union they will be unable to compete with the 40 new ‘Supercentres’ that Wal-Mart is planning to open next year. They point out that Wal-Mart employees often earn half the wage of unionised workers and must pay the greater share of their own health coverage (a reason why a majority don’t have any).

Wal-Mart, of course, has replaced General Motors as the world’s largest corporation. The Bentonville, Arkansas-based chain has made the Sam Walton clan the richest family in the US (current net worth in excess of $100 billion) by combining ‘just in time’ technology with the most savage features of Victorian capitalism and colonialism.

Wal-Mart is notorious for paying poverty wages and cheating overtime from its one million American employees. The company is even more sinister overseas, where it ceaselessly pressures its thousands of suppliers in Bangladesh, China and Central America to reduce labour costs and abrogate worker rights. Indeed it is the biggest indirect employer of sweated and child labour on earth.

‘Wal-Martisation’, therefore, has become synonymous with the race to the bottom, the total gutting of workers’ rights and social citizenship. It is also the most convenient excuse for other retail corporations, like the supermarket chains, to launch pre-emptive offensives against their employees.

These issues are well understood by all unions and the UFCW has won impressive solidarity from teachers, machinists, janitors and hospital workers. On one occasion 3,000 longshoremen marched from the Los Angeles docks to demonstrate at a nearby market. And, in a dramatic break with its usually selfish traditions, the powerful Teamsters’ union recently refused to haul food and produce from market distribution centres.

The most remarkable and unexpected development, however, has been the sustained solidarity of the general public. Hundreds of thousands, if not millions, of southern Californians have changed their shopping habits, often commuting long distances, to avoid crossing picket lines. There is an invigorating whiff of the 1930s in the air.

Yet, despite a huge drop in holiday sales and profits, the three supermarket chains, united in a probably illegal ‘mutual aid’ pact, have refused to withdraw their principal demand for a cap on healthcare contributions. Theirs is a war to the finish. Thus the strike will most likely grind on through the new year.

It may be odd to think of a labour dispute in sunny California as a watershed for American trade unionism. But everyone is grimly aware that the UFCW must win this strike at all costs if it is ever to have a chance of organising Wal-Mart’s evil sweatshop empire.

Mike Davis is an activist and author. His books Late Victorian Holocausts, Prisoners of the American Dream and Magical Urbanism are available from Bookmarks on 020 7637 1848. 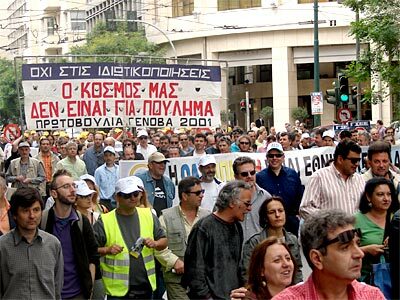 Socialist speaks from jail on the growing revolt