This article is over 12 years, 1 months old
Pakistan was formed in 1947 when the British Empire partitioned the Indian subcontinent as it withdrew. The new state was proclaimed as a "Muslim nation", but it was made up of six different linguistic groups, each with different traditions.
Downloading PDF. Please wait...
Tuesday 15 December 2009

Pakistan was formed in 1947 when the British Empire partitioned the Indian subcontinent as it withdrew. The new state was proclaimed as a “Muslim nation”, but it was made up of six different linguistic groups, each with different traditions.

This meant that different groups hankered after independent states. The Bengalis of East Pakistan, which was separated from West Pakistan by 1,000 miles of India, did break away in 1971 to form Bangladesh.

The military, landowners and industrialists have dominated Pakistan since its existence. Military dictatorship has marked much of the country’s life.

There was a brief hope that the rule of the rich could be challenged in the 1970s when Zulfikar Ali Bhutto was elected president, speaking of socialism and nationalisation.

But he betrayed his working class and peasant supporters. As his popularity fell away right wing General Muhammad Zia-ul-Haq overthrew and later hanged him.

Military and civilian rulers backed the US attempt to subvert the Russian occupation of Afghanistan in the 1980s. They aided the Afghan Mujahadeen fighters in their war and allowed the US to use Pakistan as a base.

And, once the Russians were defeated, they sponsored the Taliban in the 1990s in the hope of getting a pro-Pakistan government in Afghanistan.

General Pervez Musharraf took power in a coup in 1999, aided by popular discontent with leading politicians, such as president Nawaz Sharif and former president Benazir Bhutto.

But the 2001 US war against the Taliban in Afghanistan forced him to turn against his former allies among the Pashtun ethnic group, thus destabilising a carefully constructed political alliance he had put in place.

Growing discontent with his backing of the war and the lack of political and social change, led to a rising movement against his rule.

Musharraf was forced to resign as president in August 2008, after the opposition, made up of the parties of Nawaz Sharif and Asif Ali Zardari, the widower of Benazir Bhutto, won the general election.

They have continued with Musharraf’s pro-war and pro-market policies, intensifying the crisis facing the country.

Pakistan: faultline of the war on terror 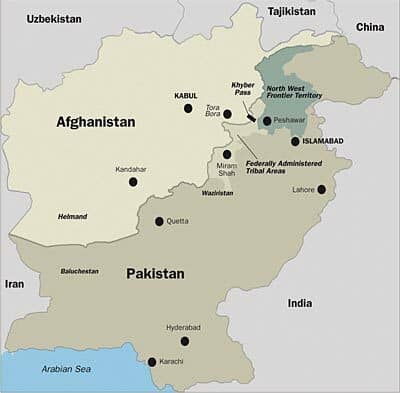 Map of Pakistan and Afghanistan