This article is over 9 years, 8 months old
Revolutions across the Middle East and North Africa have dramatically shifted the balance of power in the region, writes John Rose
Downloading PDF. Please wait...
Tuesday 20 November 2012

There was mounting panic in Washington, London and other capital cities at the beginning of this week. It was caused by the prospect of an Israeli ground invasion of Gaza.

Combined with the unpredictable consequences of the Arab Spring this would plunge the region into even greater chaos.

On Saturday hundreds of thousands were on the streets of Jordan both in solidarity with Gaza and calling for the fall of the regime. They are ruled by pro-Western despot King Abdullah.

The panic at the top is a recognition of a new kind of Arab politics emerging from below, finally corroding Western domination.

Youngsters in the Israeli-occupied West Bank belonging to the Fatah group also took to the streets to demonstrate this week.

They did so not only in solidarity with Gaza but also against Mahmoud Abbas, the discredited leader of the Palestinian Authority and Fatah.

There are voices calling for an Arab Spring-inspired struggle for democratic rights. They demand one person one vote throughout Israel and the occupied territories—crucially involving the millions of Palestinian refugees. Such a revolutionary game changer would spell the end of Zionism.

Israel has very different ideas. It wants Egypt to absorb Gaza, carve up the West Bank with Jordan, and retain just a few Palestinian villages making traditional handicraft for tourists.

The struggle over these competing solutions has just begun. Its outcome will be determined by the Arab Spring.

The decisive player in the new politics is Egypt. Its new, democratically elected Muslim Brotherhood government is already caught in the contradictions of power.

It has a choice—to retain the pro-US, pro-Israeli policies of toppled dictator Hosni Mubarak or to support the overwhelming pro-Palestinian aspirations of the Egyptian people.

This was brilliantly exposed by Egypt’s Revolutionary Socialists when they called on the new government to stand by its pre-election policies.

These include permanently opening the Rafah crossing on the Egypt/Gaza border, to provide proper relief and to abolish the Camp David peace accords with Israel or at the very least organise a referendum.

Socialist Worker has long argued that the key to the liberation of the Palestinian people lies in the power of the Egyptian working class.

They have now entered centre stage through the revolution they created. This brings Palestine ever closer to the heart of the Arab Spring sweeping the region.

by Gigi Ibrahim in Gaza

This was a first in history. Over 500 Egyptians, some without passports, got through the Rafah crossing into Gaza during a war on Monday. This was beyond our wildest dreams—it would have been simply impossible before.

We wanted to send a message that post-revolution relations between Egypt and Palestine must change. We wanted to break the siege and show our solidarity with the people of Gaza.

We wanted to tell our current president he can no longer continue with the same old Mubarak policies. We are demanding that Egypt cuts all ties with Israel and opens the border with Gaza without any strings attached.

Our “people’s convoy” of eight buses was organised by several left wing groups including the Revolutionary Socialists. It included independent activists, workers and medical students.

We drew a lottery of five of those who had passports from each bus to enter. Then we got a happy surprise when the Egyptian officials told us, “You all will get in”.

It was our size that made it possible—but it wasn’t without a fight. As soon as we came to the border we made a huge protest and threatened to camp out.

On the other side, in Gaza, we found continuous power cuts and bombs landing nearby. My body shook every time one went off. We were taken to Shifa hospital—the biggest in Gaza—to visit the injured. Everyone was so happy to see Egyptians coming to Gaza, “bringing Tahrir with us”.

It was amazing how accustomed they were to bombs going off but to me it was eye opening. I toured the hospital with a doctor and some activists. The people were the most resilient and courageous I have ever met.

The doctors told us about the kind of casualties they receive and their life in Gaza while all the time Israeli missiles were landing in the background.

Some patients had their legs amputated, a lot of them were children and women. Yet they were ear to ear smiles greeting us. They said how much it meant to them that we had risked our lives to visit in solidarity with their resistance.

We said to one child, “Hope you get well soon.” He replied, “I have to get better to go train to be a fighter against the enemy.” We proved that people’s solidarity is 100 times more effective than waiting for governments to listen to our demands.

People across the world protested last Saturday against Israel’s ongoing airstrikes on Gaza. In London thousands rallied outside Israel’s embassy in the afternoon.

A group of women held placards asking drivers to “honk for Gaza”. Bus drivers, motorists and cyclists made a deafening noise as they passed.

“William Hague makes me sick,” said NHS worker Navid. “He gives a green light to Israel, just like he does to the regimes in Bahrain and Saudi Arabia.”

Many protesters talked about the Arab revolutions. Walid, a student from west London, told Socialist Worker, “Hosni Mubarak is gone from Egypt. The new government knows that if Egyptian people don’t like what it is doing, they will go back to Tahrir Square to change it.”

Another protester, Sadia, said, “I hope that people in Palestine see our protest and see that people here care.”

Meanwhile 1,000 protested in Edinburgh, and 300 in Manchester and Bristol. Some 200 demonstrated in Liverpool, Nottingham and Cardiff, 100 in Brighton and 30 in Bournemouth.

A group of around 50 students staged a walkout at Allerton Grange school in Leeds on Monday of this week. Another 50 began an occupation at the School of Oriental and African Studies in London. More marched across the world in Athens, Berlin and in cities across the US.

Protesters in Jordan are facing state brutality as they continue to call for the downfall of the Western-backed regime there.

The mostly young crowds threw rocks at security services in the second city of Irbid last week. One protester was killed on Thursday of last week during protests at a police station.

The demonstrators have taken up the battle cry of the Arab Spring, “The people demand the fall of the regime.” Jordanian workers’ unions staged a strike on Sunday to protest against the price rises, which could see the cost of household gas rise by 53 percent.

In the Egyptian cities of Cairo and Alexandria, protesters held rallies calling on their government to support the Palestinians against Israel.

Palestinian flags were raised in refugee camps in Lebanon, and in the capital Beirut scores of people protested outside the UN. In Yemen mass protests after Friday prayers were held to support Palestine. 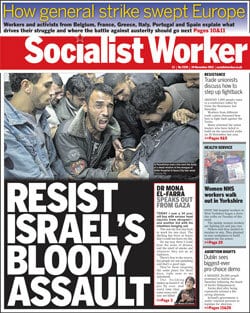