Workers across Europe must unite against austerity

This article is over 10 years, 1 months old
This week is special for workers across Europe.
By Panos Garganas, in Athens
Downloading PDF. Please wait...
Monday 28 November 2011

This week is special for workers across Europe.

On Wednesday more than two and a half million workers from 29 unions were set to shake Britain’s government in the biggest strike since 1926.

And on Thursday it is the turn of workers in Greece to stage a general strike. This will be the first against the new coalition government headed by banker Lucas Papademos.

Many threads link these actions.

First, we face the same savage cuts that rob ordinary people to bail out the rich.

In Greece, the budget for 2012 just presented to parliament cuts the funds for unemployment benefits by 26 percent. This is in a country where unemployment has jumped by 50 percent in just a couple of years.

Thanks to taxation agreements between the Greek and British governments, Greek ship owners pay next to nothing in taxes. These people are among the wealthiest bosses in the world, many of them based in the City of London,

They will pay around 12 million euros in tax next year. Yet migrant workers in Greece are taxed to the tune of 50 million euros just to get a work permit!

Our rulers coordinate their attacks.

In Britain ministers threaten strikers with new anti-union laws if they go ahead with this Wednesday’s strike action.

In Greece the leader of the power workers’ union, Nikos Fotopoulos, was arrested and dragged to court last week along with 16 other trade unionists.

They had been taking part in an occupation to try and stop electricity company DEH from cutting off poor people who can’t pay their bills.

People in Greece have been burdened with a new tax—and if they don’t pay their electricity is cut off.

The trial of the occupying workers is set to begin on Wednesday 30 November, the same day as the strikes in Britain.

Linking our struggles together is vital. And it’s particularly important for Greek workers.

Government propaganda tries to paint our strikes as useless in the face of the broader crisis in Europe. How can a small country like Greece stand up to the likes of Germany or France, they ask, hoping to demoralise us.

Our answer is clear. We don’t see the problem along national but along class lines.

Workers everywhere are fighting back against the same class of bankers, bosses and governments that orchestrate attacks on us.

Together we are stronger in our resistance. The streets of London and Athens will send this message loud and clear this week. 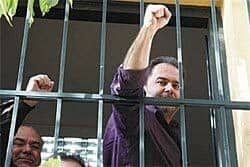