This article is over 19 years, 5 months old
THE HEAD of the International Monetary Fund (IMF) sensationally admitted last week that international bankers had forced a desperately poor African country to sell grain just as a famine began. They demanded that the life-saving grain was sold in order to repay debts.
By Charlie Kimber
Downloading PDF. Please wait...
Saturday 20 July 2002

THE HEAD of the International Monetary Fund (IMF) sensationally admitted last week that international bankers had forced a desperately poor African country to sell grain just as a famine began. They demanded that the life-saving grain was sold in order to repay debts.

Up to three-quarters of Malawi’s 11 million people are dangerously short of food, three million are starving and hundreds have already died. Children have been particularly hard hit.

None of this melts the hearts of the people at the top of the financial system. At a recent meeting in London of the House of Commons Treasury Select Committee IMF managing director Horst Koehler said it was the World Bank and the European Union (EU) which had pressed Malawi into selling 28,000 tonnes of maize. He tried to play down his own agency’s role. Koehler said, ‘It’s plain wrong to blame the IMF. Ask the World Bank and the EU what they did.

‘The IMF was part of the process. The IMF may have not been attentive enough, but the decision was with the World Bank and the EU.’ The details of the deal are that, just as the food crisis was beginning, Malawi needed dollars to repay a key commercial creditor.

The World Bank instructed President Muluzi of Malawi, who the West helped into power, that these bills could not be ignored. So Malawi duly sold the maize to Kenya. Such deals recall the Irish Famine of 1845 and the terrible Indian famines during the British colonial period. In both cases millions starved while food was exported.

Malawi’s situation is set to get even worse. Foreign governments and bankers have set targets for Malawi’s budget. The government has ‘failed’ to tear into its own population harshly enough and has exceeded the rigorous limits on its spending.

It has, for example, only increased user fees for health and education by a relatively small amount, much less than the Western governments deem necessary. As a result the IMF has taken punitive measures and withheld $47 million in aid. The British government, while sending out warm words about helping the Third World and cutting debt, has followed the IMF advice.

It has held back $109 million of aid pending IMF approval of the Malawian budget. The IMF has also suspended debt relief for which Malawi has only just become eligible on the grounds that the economy is ‘off track’.

In addition, writes Ann Pettifor of Jubilee Research, ‘under the economic programme imposed by its creditors, Malawi has removed all farming and food subsidies and allowed the market to determine demand and supply for food. ‘This has put food prices out of the reach of millions of poor people.’ Malawi’s famine-and the famines in other parts of southern Africa which at present are affecting some 20 million people-are not some inevitable result of drought.

They are the murderous products of debt, the market and capitalism. On Monday Gordon Brown made promises of further debt relief and help to Africa. But he chairs the key IMF committee that imposes policies like the Malawi maize deal.

He is also central to the G8 countries’ debt relief scheme. In 1998 at the Cologne summit this promised that $100 billion of debt for the world’s 42 poorest nations would be written off. In fact only $14 billion has gone, and almost all of this was not being repaid anyway.

African countries are still paying $15 billion a year in debt repayments to Western banks and international agencies. The result is more famine, more child deaths and more ravages of killers such as AIDS and TB. Gordon Brown’s tiny sums of ‘charity’ on Monday will do nothing to loosen the stranglehold on Africa.

For details of the pressure on Malawi go to www.jubilee2000uk.org 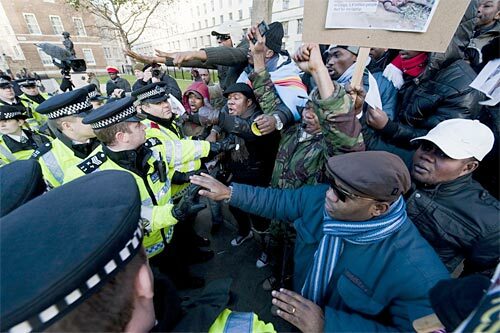 Revolt from below threatens Mugabe’s stranglehold on Zimbabwe