Zimbabwe: Mugabe cracks down on opposition

This article is over 13 years, 7 months old
Ken Olende looks at the current crisis and what the opposition can do
Downloading PDF. Please wait...
Tuesday 24 June 2008

The situation in Zimbabwe continued to deteriorate as Socialist Worker went to press.

The opposition Movement for Democratic Change (MDC) leader Morgan Tsvangirai had sought refuge in the Dutch embassy, while the government crackdown on opposition supporters continued.

This followed the opposition’s withdrawal from the presidential run-off election, due to take place on Friday of this week, in the face of intimidation from Robert Mugabe’s governing Zanu-PF party.

More than 80 MDC activists have been killed during the campaign. There have been arbitrary arrests of civic leaders.

Fourteen leaders of the Women of Zimbabwe Arise (Woza) opposition group were detained for nearly a month for protesting at the delay in releasing the election results. Two of their leaders are still in detention.

NGOs have effectively been closed down by the regime – those providing food relief, drugs and support to Aids/HIV patients have been particularly hit.

But the MDC has borne the brunt of the attacks. Tsvangirai has been repeatedly arrested, his rallies banned and campaign buses impounded.

The state-controlled media is ignoring the MDC, while people are being forced to remove satellite dishes to prevent them from viewing media independent of the state.

In the face of the crisis, some in the Western media have called for military intervention. Such intervention is extremely unlikely as military leaders are aware that Western troops would face mass hostility – not just from people in Zimbabwe but from all surrounding countries.

As Britain is the former colonial power, any British troops would be viewed as imperial invaders.

Zimbabweans are suffering terrible hardship, not just from repression, but also from economic collapse.

But they are only too aware that it was Western-imposed structural adjustment programmes that began the country’s economic crisis in the 1990s.

No African Union or regional Southern African Development Community (SADC) negotiators would consider military intervention. Their preferred solution is the establishment of a government of national unity, which would include Mugabe, his supporters and the MDC.

They point to Kenya, where violence has subsided following the recent election crisis after the appointment of a government with both the sitting president and the opposition.

But rather than end political violence, a government of national unity would integrate it into the political structure. The relative support for each party would not affect its representation.

All trade unions and left organisations reject the call for a government of national unity, arguing that it would benefit the elite and further distance the country from any real democracy. It also disarms any mass action that could challenge the corruption at the top.

It is a tragedy that the general strike it called in April against the fixing of the election results collapsed within a day.

The workers of Zimbabwe are still enormously powerful and mass action would be the most effective way to challenge Mugabe.

However the movement faces a real problem of direction. It is no small thing to go out on strike against a repressive regime in a time of severe hardship. The leadership offered by the MDC was at best vacillating, and often non-existent.

Since the MDC was founded it has steadily moved away from its trade union roots to embrace neoliberalism. It is hardly a surprise that workers do not see the party as a reliable leadership.

Repression has been stepped up since the failure of the strike. But Zanu-PF has not had everything its own way. Groups of opposition supporters have fought them on the street in areas like Epworth, Bikita, Zaka and Chimanimani. But these were isolated actions, with no central leadership.

The International Socialist Organisation of Zimbabwe commented that, “the alternative is a regrouped united front of civic society and the opposition to launch a serious and determined programme of civil disobedience and mass action.

“Any struggle that fails to do this will be outflanked on its left by this crafty regime, which has shown strong capacity to cynically manipulate the poor’s concerns and demonise the opposition as a stooge of the West.

“Without such a united front and a pro-poor, pro-working people and anti-capitalist ideology we shall not prevail against this regime.”

To offer support to the ISO, who are having to operate underground contact [email protected] or make payments to ISO Zim Solidarity, sort code 08-60-01, account number 20136938.

For more on Woza go to » www.wozazimbabwe.org 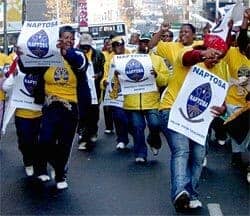 The Zimbabwean crisis could increase struggle