This article is over 20 years, 3 months old
EDUCATION secretary Estelle Morris announced last week that the government is going to change the arrangements for university fees and grants. There will, at a minimum, be grants for some students, and possibly all fees will go, to be replaced by a graduate tax.
Downloading PDF. Please wait...
Saturday 13 October 2001

EDUCATION secretary Estelle Morris announced last week that the government is going to change the arrangements for university fees and grants. There will, at a minimum, be grants for some students, and possibly all fees will go, to be replaced by a graduate tax.

Tony Blair has been forced to do this because New Labour can no longer ignore the truth-fees exclude working class people from university. This is what students have been saying for years. That is why tens of thousands of us have demonstrated against fees.

Throughout that time we were attacked and derided by Labour ministers such as David Blunkett. He claimed the fees system was fair and would be welcomed by the ‘cleaner who will no longer have to subsidise the barrister’. Now the truth is out.

Fees and no grants mean the cleaner’s children cannot go to college. New Labour was finally brought to earth on this by university heads’ complaints that they could not fill their courses, and by tuition fees being the biggest problem for Labour Party canvassers ‘on the doorstep’.

I am glad they are getting rid of fees, but it has come too late for the hundreds of students expelled from their universities because they couldn’t or wouldn’t pay, and for the thousands more who never went to college because they couldn’t afford to. If Blair’s going to tax people for having gone to college instead of for being rich, as he should, will he, Jack Straw, David Blunkett and Patricia Hewitt, who all had a free education, have to pay the tax?

Also, as they’ve admitted they got it wrong, they should write off all the student debts that mounted up because of fees.
HELEN SALMON, NUS executive (personal capacity)

ACCORDING TO the media, opinion polls show that two thirds of British people back military action against Afghanistan. A brilliant article on opinion polls in the Guardian last week by David Miller of the Stirling University Research Institute exposed the half truths of the British media.

‘Opinion polls since September 11 show that a slim but consistent majority of British people oppose military strikes on Afghanistan if they harm civilians or are targeted on anyone other than those directly responsible,’ wrote Miller.

A Gallup poll found that 82 percent of people opposed military action until after the identity of the perpetrators is discovered. An Observer poll found 60 percent of people were against ‘massive military strikes’. All polls that asked found a majority opposed to strikes risking civilian casualties. This was not reported in the papers.

This confirms what I have found in my workplace. No one is gung-ho-people want justice, not more deaths. It is a disgrace that the British media have lied to give Blair and Bush a false majority for their war.
ANNA OWENS, East London

Education is not a product

TEACHERS IN the NUT union at City and Islington College in north London have been campaigning to get our management to drop their plans to lease the ground floor of our new college to Tesco. Out of frustration many of us decided to write a protest letter to the local paper.

The next week we made the front page under the headline ‘Teachers’ Fury At ‘Inappropriate’ College Supermarket’. The editorial said, ‘Supermarkets are among the most prominent symbols of an environment that prizes profit over individuality. ‘What happens next? Playtimes brought to you by Coca-Cola, and school reports by Microsoft?’

The new plans do not even provide recreational and sports facilities, or an exam hall. The vast majority of people are fed up with New Labour’s schemes to sell off education, particularly in Islington where the whole of the education service has been privatised.
CEINWEN HILTON and ROGER GREEN, NUT reps City and Islington College

THE THREAT of strike action by the Professional Footballers Association (PFA) is over the percentage of money the PFA receives from the latest television deal. It is usually 5 percent. But the Premier League, led by money-mad Ken Bates, is offering less than 1 percent. This is about the PFA being able to support 50,000 former players, many driven out of the game through injury before wages went through the roof. This could be a victory against the men in grey suits at the top of football.
JOE VARNEY, Coventry

TWO WEEKENDS ago I attended the first Marxism conference in Rome, organised by Comunismo dal Basso, the Italian sister organisation of the Socialist Workers Party. There were about 40 people there from all over Italy, mainly young students who were vibrant, enthusiastic and well informed.

We discussed the anti-capitalist movement, globalisation and the threat of war. We also participated in the demonstration called by the Refounded Communist Party on Saturday afternoon. Over 50,000 people were on the march.

Everybody sang socialist songs like ‘Bandera Rossa’ and ‘Bella Ciao’. The whole of the huge square where the march ended was filled with raised red flags, and everyone sang the socialist anthem, the Internationale, against Bush, Blair and Berlusconi’s bitter war. The weekend has strengthened Comunismo dal Basso’s hopes to grow and build this movement.

US and Britain are no solution

I COMPLETELY agree with Peter Gill (Socialist Worker, 6 October) that the Taliban are an extremely repressive regime that socialists would never support, but in this they are not at all unique.

We suddenly know about the Taliban regime in Afghanistan because of the hypocrisy of the politicians and the media, who decide who they will condemn and who they will support on the basis of who does what they are told by the Western powers.

In the current climate of the war drive we have to focus a fight against the biggest threat to people in Afghanistan-US and British military power. The problems of Afghanistan lie in decades of interference by the global superpowers. The solution is not more of the same.
SAKINA KARIMJEE, secretary Birmingham Stop the War Coalition

I AM writing to express my concerns that since the attacks in the US Muslims in Britain and around the world have suffered a violent backlash. Muslims condemn the attack in the US.

The Muslim community wants absolutely nothing to do with these terrorists, and we only want to be able to live in peace and racial harmony. Military actions in Afghanistan or any other country will mean the loss of many innocent lives. I would urge the world community not to support this. No war-we want peace.
ZAFAR UDDIN, chair Bangladesh Muslim Welfare Association, Teesside

Socialist Worker is with the movement

JEREMY SUMPMAN is right (Socialist Worker, 6 October) that Socialist Worker prints information which you cannot find elsewhere. Politicians and their friends in the press argue about the scale of retaliation for the tragic deaths in New York and Washington, but there is a consensus that ‘something must be done’.

They try to convince us under the liberal guise of balanced reporting. It is no such thing. Our paper is different. We do not pretend to be impartial. We are always on the side of workers, be they in the US, Afghanistan or wherever.

George Bush is always on the side of US bosses. His system kills 19,000 children a day from the consequences of Third World debt. He has killed scores of Americans himself through execution.

Now he plans a war. This is not to root out terrorism. The US uses terrorism when it wants to. Read Socialist Worker to see how the anti-war protests gain momentum, and use the arguments to help build the movement.
PETER ROBINSON, South London

Now, as a disgruntled Labour Party member, I am very sympathetic to the much-needed opinions you represent, and look forward to renewing my membership.
NEIL OWEN, Shrewsbury

Confidence Back on the Frontline 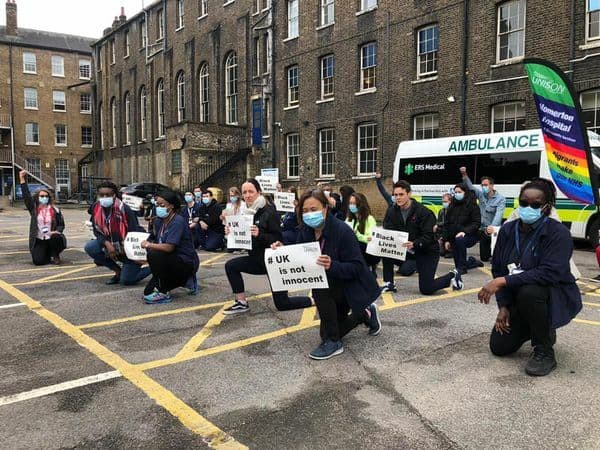