This article is over 17 years, 5 months old
"I SAW recruits bullied to death. It was disgusting and I’ll tell that to the inquiry." Those were the words of Scott Knowles, a former serviceman who served at the notorious Deepcut army training camp in Surrey between 1992 and 1997.
Downloading PDF. Please wait...
Saturday 15 January 2005

“I SAW recruits bullied to death. It was disgusting and I’ll tell that to the inquiry.” Those were the words of Scott Knowles, a former serviceman who served at the notorious Deepcut army training camp in Surrey between 1992 and 1997.

His allegations came as Surrey police announced it has uncovered 173 serious allegations during the course of its investigation into the suspicious deaths of four Deepcut recruits from gunshot wounds. These complaints are wide-ranging. They include physical and sexual harassment, as well as nine allegations of rape.

Adam Ingram, the armed forces minister, told parliament that there is “no question of a cover-up”. The response from the Ministry of Defence (MoD) has been equally predictable. It insists that bullying is taken seriously when reported, and that it remains an isolated problem.

Ministers have rejected calls for a public inquiry into Deepcut. Instead Ingram has set up an independent review of the 173 new complaints. The four suspicious deaths at Deepcut are not included in the review. The terms of reference for the review will be decided by the MoD itself.

Ingram says, “Violence and intimidation are not the means by which the army produces the soldiers it needs.” Having served six years in an infantry regiment, I know that this statement is wildly inaccurate and extremely misleading.

In my experience violence and intimidation are the exact tools used routinely to dehumanise and brutalise any individual unfortunate enough to be in the British army.

The bullying and dehumanisation must end. The army must be subjected to a radical overhaul—and that can only be achieved when the same has been done to society.

The role of the army must also be redefined. If youngsters wish to serve abroad then let it be as pioneers of peace. Let these units be manned by health workers, engineers and agriculturists.

Finally, we need a full independent inquiry into this disgraceful state of affairs. The MoD isn’t disgusted at the level of brutality in the army—it is disgusted that the media attention on Deepcut and elsewhere has put their normal training methods under scrutiny.
Barry Donnan Kilwinning, Ayrshire

Ismail Patel received a letter from RBS on 15 December giving him 30 days to make alternative banking arrangements. It stated, “The bank has carried out a review of your banking arrangements and has decided as a result of that review that it no longer wishes to provide banking facilities to you.” It gave no reason for closing down our accounts after ten years.

We are grateful to each and every supporter who rallied around us immediately, without questions or doubt, in the face of such blatant harassment.

The vulnerability of those seeking justice in Palestine has been highlighted by this incident. It is important for us to assist each other and put pressure on any institution attempting to silence us by intimidation.

The greatest lesson from this episode is that the efforts of a united front cannot be ignored, even if that of an individual or single organisation can be. This victory is for us all.
Friends of Al-Aqsa Leicester
www.aqsa.org.uk

The rage of Shylock

MIKE ROSEN is absolutely right to say that The Merchant of Venice is about different ways of making money (Socialist Worker, 18 December). I would, however, like to point out another issue that is at least as important as, though not unrelated to, the struggle to control capital.

Possibly the most powerful image for me is at the start of the new film of the play—Shylock greets Antonio and Antonio spits on him. Jews are also made to wear red hats in public. From the beginning of the film, we know that Jews were living in a society where they were despised by the ruling classes. They were restricted from being involved in any other business than money lending.

Even if you don’t know the story, you can expect trouble when Antonio asks Shylock to lend him the money. The question arises—who wouldn’t want their “pound of flesh” under the circumstances?
Linda Jones Glasgow

Rosalinda Hutton is right when she highlights how ID cards are effectively a progression towards a police state (Letters, 8 January). What’s also appalling is that the government can find more than £5 billion for ID cards and another huge computer system, while only giving a small fraction of that sum to the victims of the Indian Ocean tsunami disaster.

Unsurprisingly NO2ID, the campaign against the cards and the National Identity Register, is gathering support at a tremendous rate.

Last week we established 16 local NO2ID groups, from Barrow-in-Furness to Brighton. We need to get more local groups set up and active. Anyone who’s interested in getting involved in this campaign should send me an e-mail at [email protected]
Guy Taylor NO2ID local groups coordinator
www.no2id.net

Ukraine protests were manipulated by US

Dave Crouch (Letters, 8 January) says Alex Callinicos is wrong to stress that in Ukraine “velvet revolution” has become a technique of US imperial rule. Instead we should stress our backing for the protests.

But the problem with Dave’s argument is that the situation in Ukraine is not a straightforward continuation of the 1989 democratic revolutions. Much has changed since then. What were once revolutions powered by spontaneous mass protests from below are today more likely to be affairs manipulated from above by oligarchs competing for power against other oligarchs.

The US tried this during the Serbian Revolution of 2000 by channelling funds to opponents of Milosevic. Then the spirit of 1989 triumphed when a working class insurrection swept Milosevic away. By contrast, in Ukraine the spirit of 1989 has been muted by politicians who have been able to control the protests from above with US backing.

This is why recent events in Ukraine mark an important step in the degeneration of the 1989-style democratic revolution, now deeply corrupted by competing ruling class and imperialist interests.

We must of course take the mass protests seriously. But to do that we must assess how and why the character of the “velvet revolution” is different today.
Dragan Plavsic West London

FOUR MEMBERS of the Royal Regiment of Fusiliers accused of offences in Iraq were to be courtmartialled at Osnabruck in Germany on 10 January—so said the defence secretary in his letter to my MP.

Trials by courts martial are open to public and I had planned to travel to Osnabruck last weekend for that purpose. But all is not as it seems.

I was told that instead a preliminary hearing was to take place this week, and this would be held in secret. Three days have been allocated for these hearings, following which a public trial of some sort will take place on 17 January.

The secrecy of the pre-trial hearing, the ever-changing schedule of the courts martial proper, and its location in a remote corner of Germany are designed to discourage the public from witnessing the proceedings.

The outcome of the courts martial is likely to be predetermined by plea bargains behind the scenes during the three-day long preliminaries.

And nobody will take notice, as we continue to wallow in grief over god’s handiwork in the Indian Ocean while condoning what our arms have wrought in other parts of the world, in our name.
M A Qavi South London

Cherie keeps her head down

The Justice for Gordon Gentle campaign sent a copy of a new anti-war film, Dear Mrs Blair, to Cherie Booth just before Christmas. The film is a mother to mother message from myself to Mrs Blair asking her how she felt about troops being sent to Iraq. It was backed up by 500 postcards asking the same thing.

In the film I asked Mrs Blair to get Tony Blair to stop sending troops into Iraq. She’s still got her sons, I said, and I’ve lost mine—I showed her Gordon’s gravestone.

We received a reply from Cherie Blair’s office on New Year’s Eve. It expressed “sympathy” but said she was a “private citizen” who would not intervene in public matters.

I think it’s a total disgrace. Surely she must have an opinion on this? I don’t think she’s even watched the film. And why hasn’t she had the decency to write back herself?

Personally I don’t think they give a damn—but I’m not shutting up.
Rose Gentle Glasgow
www.mfaw.org.uk

I APPLAUD Charlie Kimber for his first-class analysis of the so called pensions crisis (Socialist Worker, 18 December). The problem we have is that capitalism (state or private) only values those economic activities from which financial capital can be easily skimmed in the form of profits.

Other economic activities that may provide social, cultural, environmental or moral worth are undervalued.

Thus working in a cigarette factory, or as a government flunkey on a quango, are valued more highly than housework, retired grandparents and so on.

Capitalists will only be interested in these activities if they can find a way to commodify them and skim profit from them.

Where will this end? Mothers forced to hand their children to state nurseries at 18 months and go back to work or lose all state support? Pensioners encouraged to opt for “voluntary” euthanasia at 75 or face an old age of penury and pain? These ideas may seem like science fiction now—but consider how far New Labour has already moved in this direction in the last seven years.
Andrew Stephenson East Sussex

Why does US back Israel?

I was in an argument lately and wondered if you could help on the following points. The people I was arguing with said that it is not the case that the US needs Israel as an ally. The US army does not use Israel as a base. There is no oil in Israel. The Israeli army does not play a part in US adventures in region.

Their argument was that Bush has to support Israel for fear that money owned by Jewish capital would be withdrawn. But the US doesn’t have to be told to support oppressive regimes in Chile, Africa, Saudi Arabia etc by rich sections of those countries. So I don’t think this is the cause of its support for Israel.

Please could someone write, in simple line-by-line points, on what determines US policy towards Israel?
A Richards

US base knew about wave

THE US military base on Diego Garcia should have known about the tsunami, since a seismatic station was installed there last February.

Diego Garcia has also a hydro-acoustic station monitoring underground nuclear tests. They know when an iceberg will ground on the sea bottom.

The tsunami must have created an enormous acoustic signal which Diego Garcia should have picked up. Together with the first warning they got 14 minutes after the event, someone should have noticed.
Martini Gotje Waiheke Island, New Zealand 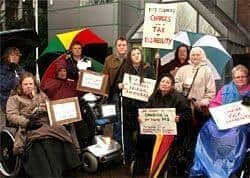 Disgusted at how Labour government is treating us

Soldiers are pawns in game