This article is over 19 years, 4 months old
I AM one of the 6,000 call centre workers employed by Reality who were balloted for strike action over a threat to cut our jobs. I voted yes to strike. Reality is a multi-million pound catalogue company owned by Great Universal Stores.
Downloading PDF. Please wait...
Saturday 14 September 2002

I AM one of the 6,000 call centre workers employed by Reality who were balloted for strike action over a threat to cut our jobs. I voted yes to strike. Reality is a multi-million pound catalogue company owned by Great Universal Stores.

Reality wants to increase those profits by outsourcing call centre work to India. It may then try to sack some of us. This company just uses workers in Britain and India.

In the call centre I work in, it’s imperative that you spend the maximum amount of time on the phone. Qualifying for a bonus scheme is all calculated through how much ‘personal time’ you take off at work. Your personal time must not exceed 9 percent of your time on the system. In a four-hour shift you cannot have more than 20 minutes off the phone.

If you take up more time, the manager’s bonus goes down, which they shout about. And you won’t get any bonus, which is calculated quarterly. In that shift you are probably making 75 to 150 calls to the public. At least 6 percent of these must be converted to sales. In Reality, as in most call centres, you are assigned to a team and a manager. You then compete against other teams for the highest and best figures. All outgoing calls are for the same purpose – to cajole people into placing an order.

These are ordinary people who don’t have much money. Many customers have entered a free prize draw. They get a catalogue, which they didn’t ask for. We call them and they think they might have won the draw, but instead we are trying to get them to buy something.

A job in Reality is slow and monotonous. We face a bullying company and I hope we take action that will make them sit up and notice the workers for once.
REALITY CALL CENTRE WORKER

Carnival was a blow to Nazis – and great fun

WE WORK in north London as postal workers, and together with friends and families about 30 of us travelled to Manchester for the ‘Love Music-Hate Racism’ carnival. Our own branch of the CWU union is affiliated to the Anti Nazi League and they keep us up to date with what’s happening as regards the British National Party. As postal workers we have a proud tradition of opposing the delivery of Nazi hate mail – their election leaflets.

The carnival gave us the chance to mobilise people with a clear anti-racist message around music. All the artists reminded us of why we were there, especially Heartless Crew and Ms Dynamite. On the journey up on our coach we received a briefing about the problems with the Nazis in Burnley.

On the way back people had gained not only an enjoyable day but also satisfaction that around 30,000 people had given a clear message against the Nazis. We hope to have played our part in giving people in Burnley the confidence to organise and support the holding of a carnival in Burnley. We all loved the music, and we all hate racism.
NW1 BARNBY STREET POSTAL WORKERS DELEGATION

THOUSANDS OF mental health service users and workers were set to join together to march on Whitehall next Saturday to oppose government plans to increase powers of compulsory treatment. Now people are outraged to hear that the organisers are attempting to cancel the event.

The Mental Health Alliance have pulled out because of fears about safety in light of tensions following the recent tragic events in Soham. Apart from surrendering to the legislation, this move will only reinforce the misunderstanding that if someone has mental health problems they are more likely to commit violent crimes.

For many years the government and the media have both fuelled this kind of prejudice. But people with mental illness are no more likely to be dangerous than any other group. The new laws will further stigmatise and marginalise people. They will mean that people who have committed no crime but have the dubious label of ‘severe personality disorder’ will be at risk of indefinite ‘preventive’ detention.

It will also be much harder for people who use community services to refuse treatment that they do not believe is helping them. Mental health workers and service users have long campaigned to increase resources available to people and reduce the need for compulsory treatment. Last year 2,000 people lobbied parliament against the proposals. Service users and supporters are still planning to march next Saturday. The Mental Health Alliance should support us.
JOHN COOPER, community mental health nurse, Birmingham

WE ARE three sisters from Burnley who went to Manchester for the Anti Nazi League carnival two weeks ago. We joined the march that went from Manchester city centre to Platt Fields Park, where the carnival was.

There were 3,000 people on that demonstration. It felt really good to march and show everyone that people can mix together – Asian, black and white. It would have been even better if we could have been able to hold that march and carnival in Burnley, because that’s where the British National Party have three councillors.

But the local council refused to allow it to happen. We really hope there can be a carnival in Burnley next time. After the march people carried on to hear the carnival acts. There were 30,000 people there, just enjoying themselves and listening to loads of famous singers. We all had a really good day and our friends are wishing they could have gone too.
NAZIA, RHAZIA and KUSHI BEGUM, Burnley

Why are poor left starving?

ABSOLUTE FOOD shortages are rare. Rich people never starve. Poor people do. But this is true of countries too. The bitter background to every famine in Africa is the poverty of the country suffering it, and the Western societies that are so unprepared to share their wealth. All this is happening in an age when the money and technology are available to provide succour for everyone in a matter of weeks.

Why are the US, Britain and the rest of Europe not doing much more? Only one thing is missing – political will. The will of the rich powers to intervene and end what is nothing short of an international obscenity. In years to come it will seem inconceivable that in 2002 help was not forthcoming for millions of suffering people on this planet.
JOHN SCOBBIE

No place at TUC

CHARLES KENNEDY will be the first Liberal leader allowed to formally address the TUC conference for over 100 years in a treacherous breach of the 1890s conference resolutions. What democratic consultation did John Monks engage in before inviting him to take up precious time that could be better deployed? Here in the supposedly affluent south the Liberal Democrats have often been in municipal or county control.

What a record of incompetence and contempt for working people that has been! In Eastbourne they have reneged on promises to permit tenants associations and ordinary folk a direct say at council committees about real social crises. These include dilapidated council house stock and whole families on benefits put in cramped, high-rent bed and breakfast accommodation by profiteering landlords.
LARRY ISLES, Eastbourne

Solihull’s houses are not for sale

AFTER THE overwhelming vote against the transfer of council homes into the private sector in Birmingham, nearby Solihull council has dropped for at least a year its plans for transfer. A growing campaign was emerging in Solihull.

At a recent estate meeting tenants voted unanimously against the council representatives and their privatisation plans. Another significant factor may have been the government’s latest review of council housing finance.

Due to the pressure from tenants’ and residents’ groups and the votes against transfer, the government has been forced to rethink the way it has been starving councils of money to put in their homes.
LUKE HENDERSON, Birmingham

THE TWO victorious strikes by health workers in Scotland show us what can be achieved by determined rank and file action. Striking Unison union members working for the multinational Sodexho at Glasgow Royal Infirmary won a return to NHS terms and conditions.

Then health workers at the Royal Inverclyde and Royal Alexandra hospitals went on unofficial strike and won a pay rise of £5 an hour. This is a fantastic boost for our campaign for a living wage in east London. Unison members working for Medirest in Tower Hamlets and ISS/Mediclean at the Homerton and Whipps Cross hospitals have already lodged a claim for NHS pay and conditions for contract workers.

In Tower Hamlets we are meeting to discuss action if these companies reject our claim, and we are inviting a speaker from Scotland.
JIM FAGAN, joint branch secretary, Tower Hamlets Health Care Unison

JUDY COX is quite right to argue that a lower speed limit would save far more children’s lives than a witchhunt of paedophiles (Socialist Worker, 31 August). But she could go further. The panic engendered by events like the Soham tragedy means that children are taken everywhere by car instead of being allowed to walk.

This not only blights kids’ lives, it makes the roads even more dangerous. Papers promote not just the fast car culture but the insidious culture of guilt that says parents are failing their children if they are not car owners.
IAN BIRCHALL, North London 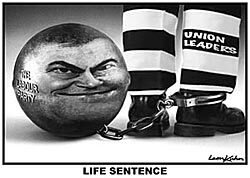