This article is over 9 years, 7 months old
The Tories want us to believe that they are reformed supporters of lesbian and gay equality.
Downloading PDF. Please wait...
Tuesday 19 June 2012

The Tories want us to believe that they are reformed supporters of lesbian and gay equality.

To prove it they are proposing legal reforms that will allow us to marry.

But there’s a problem.

They need to keep their bigoted friends and religious supporters in high places on board. So churches are to be free to continue to discriminate against us.

As with most Tory proposals, it’s all about “choice”.

Church leaders have been told not to panic—as they can choose whether to marry gay people.

Where’s the choice for gay people who want to marry in a church?

And what about the simple notion that discrimination on the basis of sexual orientation is unacceptable?

Of course people have a right to their religious beliefs.

But leaders of religious institutions parade their bigoted views across the media as if, because they are religious, they are acceptable. They aren’t.

The Tories are quick to condemn Islamic countries where LGBT people are badly treated.

They aren’t so keen to apply the same logic at home.

The Stonewall charity last month found that 3 percent of gay men have tried to take their own lives in the last year.

That compares to 0.4 percent of men in general.

The Tories are doing nothing to address homophobic bullying.

And they certainly aren’t prepared to take on the church or break the link between the church and the state.

That would alienate a large chunk of their traditional voting base.

The Tory marriage proposal continues discrimination and bigotry. I hope there is a challenge to the church exemption if the reforms on gay marriage pass—and that it’s won.

Unity can stop the fascists

The fascist English Defence League (EDL) has announced its intention to march in Waltham Forest in east London on 18 August.

Local people have launched the We Are Waltham Forest campaign in response.

It brings together people of all races, religions and political beliefs to show that racists aren’t welcome in our multicultural borough.

Speakers from the platform and the floor emphasised that, whatever our differences of opinion, we must link arms and stop fascists marching.

We Are Waltham Forest already has the support of the local council of mosques, as well as many local campaigns and trade unions.

The campaign has got off to a busy start. We’ve started a mass leafleting campaign and drawn up a unity statement and model motion.

We must continue to get the message out that Waltham Forest is a no-go area for fascists.

We urge all anti-fascists to support our campaign, and join us on the day to ensure that the racist and fascist EDL cannot pass.

We Are Waltham Forest

We’d like to thank all those who helped make the Climate Jobs caravan such a success.

Organising for the caravan led to the development of local groups and networks willing to push the case for climate jobs.

Particularly attracted to the caravan were the young for whom the Climate Jobs vision offered an alternative to austerity and unemployment. We must not let them down.

The demand for a million green jobs is TUC policy and should be a major plank of the march it has organised on 20 October.

Donations to the cost of the caravan are still welcome! You can find out more from our website at www.climate-change-jobs.org/caravan.

Benefit change will leave the poor to rot

I have found some horrifying information about the government’s Welfare Reform Bill.

As you will know, Disability Living Allowance (DLA) will be abolished and replaced with a Personal Independence Payment.

But it seems that only claimants on the higher rate of DLA will qualify for this new benefit.

Others will be automatically disqualified with no right of appeal.

Claimants for the new benefit will have to undergo a medical assessment.

The change will also affect people when they reach pension age.

Those who receive the PCG may qualify for other benefits such council tax benefit and winter fuel allowance.

They automatically get the maximum housing benefit.

But the Tories are considering abolishing the PCG.

Could this mean those who would have claimed it would be ineligible to claim the other benefits too?

Paying for the banks – again

Chancellor George Osborne plans to ringfence some customers’ deposits in banks so that bankers can’t gamble with it.

But unbelievably it looks like we’ll be paying for the changes!

The Tories have admitted that people might have to pay higher bank charges and mortgage payments as a result of the changes.

There’s a simpler option—nationalise the banks.

Let’s have a banking strike

Why doesn’t the Unite union call for a strike by bank staff over their pension changes?

Why is the media so interested in Rebekah Brooks’ shoes?

For some newspapers her shoes took up enormous amounts of “reporting” on her court appearance last week.

Are they trying to write such bad reports that we’ll stop reading about the scandal?

I’m furious that government spying on our emails is going to cost us £1.8 billion.

Where’s the cry that we all have to tighten our belts gone now?

The paper is on the move

Last week copies of Socialist Worker appeared on the news stand at my local Waitrose supermarket.

Although the lady on the till didn’t initially know how much to charge me for a copy, she accepted my money when I offered her a pound.

How refreshing it was to see the paper lying proudly next to copies of the gutter press.

Proud to be a council tenant 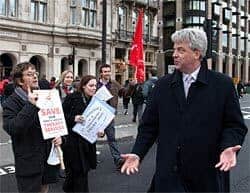