Iraqis are not cheering Bush and Blair’s war

This article is over 18 years, 10 months old
I have listened with intrigue to Mr Blair saying, 'It is the moral case for removing Saddam.' I was one of the many people of Iraqi descent who campaigned against Saddam in the 1980s up to the present day. I don't believe that Mr Blair's morality lies in what is right or wrong for the Iraqi people.
Downloading PDF. Please wait...
Saturday 08 March 2003

I have listened with intrigue to Mr Blair saying, ‘It is the moral case for removing Saddam.’ I was one of the many people of Iraqi descent who campaigned against Saddam in the 1980s up to the present day. I don’t believe that Mr Blair’s morality lies in what is right or wrong for the Iraqi people.

It lies in working in the moral interests of the large oil companies who would profit from a full ground invasion and occupation of Iraq. Even though the prime minister includes some talk of Saddam Hussein’s dictatorship I have to ask myself if we can take this seriously.

Mr Blair’s concern for the welfare of Iraqi civilians has gone so far as to maintain the sanctions. These have cost the lives of over one million children. His concern for dictators should be treated with contempt. It was not so long ago that New Labour allowed another dictator, General Pinochet, to walk free from the shores of Britain without charge.

Myself and many others have long since stopped trusting the inconsistent rhetoric that comes out of Downing Street. From the amount of people who joined the London anti-war march maybe we should now not only be looking for an end to the war plans but also to New Labour.
Hussein Al-Alak, Manchester

NICK COHEN’S articles in the Observer have become an outrage. Cohen now considers that denigrating the anti-war movement is more important than opposing Saddam. He resorts to outright lies and distortions.

He wrote about ‘the satisfaction of an anti-war movement which persuaded one million people to tell Iraqis they must continue to live under a tyranny’. The overwhelming majority who marched against the war made it clear that they are opposed to Saddam Hussein.

Cohen says, ‘It can’t support the Iraqi democrats because they say Saddam can only be overthrown by violence.’ Many Iraqi dissidents accept the necessity of violence, but not US bombing. Look at the recent Guardian article ‘Iraqis Will Not Be Pawns In Bush And Blair’s War Game’.

It was written by an Iraqi, Kamil Mahdi, who says, ‘An American attack on my country would bring disaster.’
Ed Walker by e-mail

Message of hope from Saltdean

THE HOME Office announced in January that the Grand Ocean hotel in Saltdean, east Brighton, would be used as an induction centre for asylum seekers. Within days local Tory councillors whipped up a hysterical reaction amongst residents.

It was no surprise that the British National Party saw an opportunity to feed off the Tories’ racism and arrived in the town. It would have been easy to despair or to assume that everyone in Saltdean was a racist. However this hasn’t happened.

Since our launch in May 2000, Brighton & Hove Committee to Defend Asylum Seekers has built a network of activists to challenge the scapegoating of refugees. Two of our members have lived in Saltdean for years and their children went to school there.

It was easy to find others who were horrified at the racist backlash and they formed Saltdean for Tolerance and Respect (STAR). When an anti asylum seeker protest took place, pro-refugee residents protested over the road. The pro-refugee argument was taken to a residents’ meeting and was met with some heckles, but made others think.

Recently some 70 people turned out to leaflet every house in Saltdean with a pro-refugee leaflet. Almost immediately STAR started receiving a flow of messages from people delighted that a stand is being made against the racist hysteria. We feel we have put the racists on the back foot.
Becky Shtasel, Brighton

THERE WE were on the anti-war march – tens of thousands of us squashed into the Haymarket. There was the atmosphere among people, the feeling of comradeship and excitement.

This is how ordinary life could be, were we to get rid of the vile capitalist system that’s been imposed on us. There was one common theme – disgust for the diet of lies fed us by Bush and Blair. ‘Arm the tyrant then bomb his people’ said one banner. What a sick truth that is.

‘I don’t think it is a worry about the lack of support,’ said John Prescott after the anti-war demonstration. How true is that though? The sheer size of the march suprised everyone. Blair is losing support. If we keep the pressure up he might just have to listen.
Charles Sawyer, London

A BIG meeting of Camden Labour Party in north London on Thursday of last week ended in complete uproar. The party suffered a catastrophic defeat in a council by-election in Haverstock ward.

Haverstock had been Labour since the 1930s. It was considered unassailable. But Haverstock went to the Liberal Democrats. The Labour vote collapsed in protest at New Labour in Camden, in Westminster, and over the war.

One ward has passed a motion of no confidence in Tony Blair. Another passed a resolution saying they will make no financial contributions to party headquarters until the leadership’s position on the war changes. Labour insiders confirm the haemorrhage of members.

There was mass refusal to help with the Haverstock campaign. So far the main beneficiaries have been the Liberal Democrats. A senior party official boasted on BBC2’s Newsnight that opposition to the war is winning them votes. They did not run an anti-war campaign. Instead they tried hard to keep to local issues.

But on the doorstep the war was a huge issue. More than 10 percent of the votes went to the left of Labour, to the Greens and the Socialist Alliance.
Simon Joyce, Camden, North London

Thanks for Roy’s article

I READ Arundhati Roy’s beautiful article in Socialist Worker (15 February) on the way to the anti-war demonstration. I would like to thank her for it. It has brought me back to the cause after a very long time!
Nick Shepley by e-mail

What are they trying to hide?

I RECENTLY took my camera out to take pictures in the area I live in. One of them was a Territorial and Army Volunteer Reserve building. This army guy, who was not in uniform at the time, came out. The police were called and I was held for around an hour.

I had to rip the film out of my camera. Their attitude stinks, and so does Blair’s. Democracy? Free country? I don’t think so. We need to change our regime.
A Chivers, Southampton

PEOPLE FROM Blackburn and Darwen and delegates from our trades council joined the anti-war march. Yet Blackburn’s MP, Jack Straw, is one of the most prominent advocates of war. While his constituents campaign for peace, he plots for war.

Vital public services are being lost across Lancashire. Yet Mr Straw’s colleague Gordon Brown has allocated an initial £1.75 billion in preparation for bombing. Straw, alongside Blair, is out of step with Labour Party members, trade union members and, most of all, his constituents.
Ian Gallagher (secretary), John Murphy (president), Blackburn Trades Council

AS A former miner in North Yorkshire I want to advise you about the misleading PR from government about Fylingdales being upgraded for Star Wars. The ‘enemy’ does not go for peripheral targets, they say. But in 1939 the RAF raided the Wilhelmshaven base in Germany, and then in 1945 they unloaded the last bombs of the war on that target.

In North Yorkshire there are Fylingdales and Menwith Hill, the US ‘listening post’. I have tried to alert MPs to the danger but they are just not interested.
Bill Lang, York

Bombing back to Stone Age

THE ANTI-war demonstrations have created a variety of criticism in the press. They range from being regarded as futile and ignorant to ‘siding with the extremists’. Let’s not forget what’s taking place. Millions of people are acting in direct conflict to the consent of government.

Far from being meaningless this collective struggle nurtures democracy. It is where the power for change lies, not by bombing Iraq back to the Stone Age.
Peter Bird, Penarth

I can’t wait for protest

YOU ARGUE that anti-war activists should prepare for a wave of civil unrest if war is declared. Why do we have to wait for the bombs to start falling? The brilliant sense of power we all felt on the 15 February demonstration should be channelled now into action that can shake the government.

The Stop the War Coalition could set a date when everyone could take to the streets and try to walk out of work.
Mike Hill, Birmingham

I THINK you should support people in struggle. That is how I found myself supporting Iraqi socialists who wish to rid themselves of Saddam. Why are you not following the same principle? Why shouldn’t Iraqis be set free and given a chance of democracy which will give the opportunity to choose a party of the left?
Mark Compton, East London 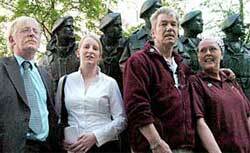 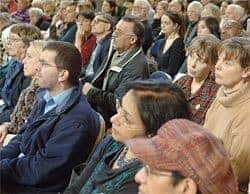 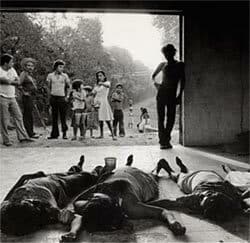