Campaigning for refugee rights in Victoria

The detention of tennis star Novak Djokovic has shone a spotlight on the Australian government’s cruel treatment of refugees. He was held for four days in a former Melbourne hotel now used as a detention centre.

Djokovic won his initial court battle to be released to play in the Australian Open tournament. But he left behind 33 refugees held by the government for more than eight years—with no end in sight.

Australia slammed its border shut to refugees arriving by boat in 2013. Those who came after the deadline were sent to Australian run detention centres on Nauru in the South Pacific or Manus island, part of Papua New Guinea.

Some were brought to Australia in 2019 for medical treatment which they didn’t receive. Altogether, about 60 are still locked up across Australia. Adnan Choopani fled persecution as a member of the Ahwazi Arab minority in Iran when he was 15.

He has been locked up by Australia ever since. He has just turned 24.

He is in the detention centre where Djokovic was held and said conditions there had “mentally destroyed” some residents. Adnan is a victim of the same system that Boris Johnson is introducing with the Nationality and Borders Bill.

Refugee supporters in Melbourne have been protesting, calling for the refugees to be freed.

Borders bill is a licence for injustice

There’s more evidence of the terrible outcomes that will follow if parliament passes the Nationality and Borders Bill.

Under clause 9 of the bill, currently under debate in the House of Lords, the government could remove a person’s citizenship without warning.

Evidence from the Cage campaign group shows that even before the bill, ten Britons have suffered detention and torture after having their citizenship stripped.

Some have been accused of belonging to a terrorist group—the justification for taking away their citizenship—but none has been put on trial in Britain for crimes.

This bill is a licence for injustice.

The decision by Elbit Ferranti to abandon its site in Oldham after sustained protests by Palestine Action is a real boost to the Palestinian cause.

The factory’s production of specialist military technologies for Israel’s fleet of combat drones will now end. The site was also used for the production of IronVision helmets for use in battle tanks such as the Carmel—specifically designed for operations in densely built urban areas, such as Gaza.

Palestine Action has campaigned at the site for 18 months, with 36 people arrested.

Activists have occupied, blockaded, smashed, disrupted, and protested regularly at the site. They have ultimately succeeded in forcing its sale by the bosses.

This success should also embolden protesters everywhere to take on unjust laws.

Early in 2021, Elbit attempted to make the Oldham factory a viable production site by improving security. Elbit increased spending massively for round the clock security, and also benefitted from a rapid police response for protester removal.

Neither of these measures succeeded in keeping out activists, with the site continuing to be targeted regularly.

We need more militant protests, with the largest numbers involved in them.

Language analysts have found that terms such as global warming and climate change are increasingly being replaced by climate emergency and climate catastrophe in popular newspapers.

This linguistic shift indicates a recognition that the severity and scope of climate change can no longer be downplayed.

The rhetoric used by popular news platforms and media outlets plays a large role in affecting public opinion and sentiment. This shift in language could be the wake-up call for many to realise the urgent need to take action.

But it’s worth considering that catastrophic framing of climate change also has the possibility to evoke an anti-futurist fatalism.

While true, claims about the end of civilization and humankind can sometimes make it difficult to imagine a viable alternative to the current system.

Instead of hopelessness, we need to channel fear for the future into real, radical, anti-system action.

A 50 year old woman wearing a hijab was violently attacked by a group of youths in Glasgow on Monday.

One attacker wielded a wooden plank and others were shouting racial abuse, covering their faces, like the vile cowards they are as they did so.

This attack spits in the face of the many people of Glasgow who, throughout its history have stood, arm in arm, with immigrants and refugees and welcomed them to the city.

Nearly 100 years ago the voices of Oswald Mosley’s antisemitic Blackshirts were drowned out by people singing The Internationale.

Last year protesters successfully blocked a deportation in the Pollokshields area of the city. And hundreds of people have attended Stand Up To Racism demonstrations in Glasgow to say “refugees are welcome here”.

This—and other racist attacks around the world—are a clear sign that these racists need reminding that they are the minority.

This vile assault should be a strong reminder to make sure that the anti-racist demonstrations in Glasgow and London on Saturday 19 March and Cardiff on 20 March need to be as big as possible.

It matters if Johnson goes

I wish people would stop saying it doesn’t matter if Boris Johnson resigns because he will be followed by another Tory.

Of course he will, but imagine the demoralisation if he survives.

And forcing him out will also be a real earthquake for the Tories who planned on him winning the next election.

Why one jab but not Covid?

You say that compulsory vaccination for NHS workers is a mistake (Socialist Worker, 12 January).

But many health workers already have to be vaccinated against, for example, hepatitis B.

What’s the difference? Is it just that the hepatitis B vaccine has been around a long time and is widely regarded as safe?

Dark side of the Johnson

Apparently 6 percent of people think Boris Johnson has been honest in responding to questions about Downing Street parties.

That’s about the same numbers who tell pollsters they think the moon landings were faked.

The threat has not gone

As Boris Johnson hit the buffers last week, it was quietly announced that 398 Covid deaths had been recorded in a single day.

Thanks for the new Socialist Worker website. I hope that everyone who reads your stories will be sharing it with others so the message goes out wider. 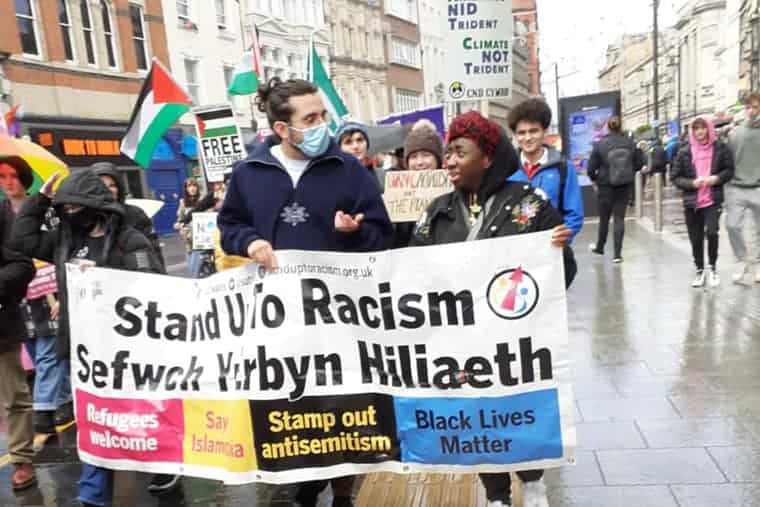