This article is over 19 years, 10 months old
THREE YEARS ago the Lib Dems won control of Sheffield council following a backlash against New Labour's plans to privatise housing benefit. The Lib Dems went ahead with privatising housing benefit and are now keen to privatise council housing. They are also attacking education, with plans to close or merge a number of special and inner city schools.
Downloading PDF. Please wait...
Wednesday 27 March 2002

THREE YEARS ago the Lib Dems won control of Sheffield council following a backlash against New Labour’s plans to privatise housing benefit. The Lib Dems went ahead with privatising housing benefit and are now keen to privatise council housing. They are also attacking education, with plans to close or merge a number of special and inner city schools.

And talk about picking on the most vulnerable! The three special schools earmarked cater for children with severe emotional and behavioural difficulties. In Sharrow the council want to close Lowfield Primary School and merge it with Ann’s Grove, but have met massive opposition from parents, staff and the local community. Lowfield is a brilliant multi-ethnic school.

We recently held a 100-strong crossing protest, holding up traffic and getting loads of support from drivers and the community. We are determined to fight the council until they back down, and to link up with other schools which are threatened to launch a city-wide fight.

I DON’T think Lowfield should be closed because it is a very mixed school, and everyone gets on with each other and there is no racism. I like my teachers and want them to keep their jobs.

I will be at secondary school by the time it would be closed, but I want the school to stay open so that younger children have the chance to go there. We held a march to stop our school from being closed and were chanting ‘No closures! No mergers! Save our school’.
BEN, aged ten

LOWFIELD is the best school in Sheffield. Children are black, white and Asian, and we are all friends. The council want to close our school and send us to a school across a busy road. Children will get knocked over. We told the council, ‘Hands off our school!’
LIAM, aged six

Conference on funds was a real boost

SATURDAY 16 March is a day I will remember for a long time. It was the day that myself and 1,200 other trade unionists came together at the Socialist Alliance political fund conference to give Gordon Brown a nice round figure to play around with in the next budget-£0.

This is the amount of money that New Labour will be receiving from the unions unless they start to buck up their ideas. Me and my colleagues from the CWU postal workers’ union went to the conference after a march against the privatisation of the Post Office to ask why we should fund the very people that are trying to slaughter our jobs.

Teachers were asking, ‘Why should we fund a party that isn’t working hard enough to ensure that we get a decent wage?’ We all came to the same conclusion. New Labour doesn’t want to help us so we don’t want to help them.

We’ll give our money to people whose ideas are more in line with our own. There were many longstanding Labour supporters at the conference who are just as fed up with the party’s recent antics. We must build the Socialist Alliance as a viable alternative to New Labour.
ZOE BARLOW, Sheffield

Paddick, justice and the police

THERE HAS been a spontaneous postering of walls and petitioning in Brixton bars in defence of Commander Brian Paddick of Lambeth. Here in south London we can see only too clearly how Paddick’s modest reform-to caution rather than arrest cannabis users-would inspire the ire of hypocritical booze-ridden hacks and a conspiracy of reactionary police officers. The right wing press have led a vicious homophobic campaign in order to discredit him.

The Daily Mail cries that he’s ‘an icon for our moral decadence’. The Sun refers to him as the ‘bent copper’. Revelations of his personal life are dredged up and roundly condemned in a heap of slurs and innuendo.

Senior police officers have been quick to investigate half-baked allegations about Paddick’s ‘inappropriate’ conduct. He has been cleared each time. His recent mild-mannered comments on anarchism have caused apoplexy among the media.

That has been followed by mutterings from police chiefs who have wondered out loud if he’s a fit person for his post. The people out to get Paddick are certainly monsters. But while exposing them we should not be bounced into uncritically defending Paddick.

His being police chief has not stopped armed policing policies, or systematic harassment which has hit black people, protesters and trade unionists.
STEPHEN PHILIP, South London

I SPENT the first two hours of my holiday to Barcelona on a plane discussing privatisation, Argentina and the EU summit with a French anti-capitalist from Montpellier. He gave me a lift to Barcelona, and told me to go and see the Manu Chao free concert to celebrate the demonstrations, which saw up to 500,000 people take to the streets to demand an end to privatisation and imperialism.

The concert took place in a park, and over 30,000 mainly young people came along to sing, dance and chant the slogans from the demonstrations. The whole crowd bounced to the sound of Manu Chao until six in the morning. Everywhere there were banners denouncing capitalism and people wearing scarves supporting the Palestinian intifada. The banner on stage proudly proclaimed ‘We are millions’, showing the confidence of this new movement.

We who oppose capitalism and war have millions on our side.
SAM O’BRIEN, Barcelona

TEACHERS AT Islington Green School in London were given a big lift by the fantastic recent strike.

After several years of retreat and demoralisation following an Ofsted stitch-up in 1997, the school’s NUT members struck solidly, closed the school and had a brilliant time on the demo through central London. Young teachers with big debts and little chance of affording a decent place to live in the capital were especially keen to protest.

At least one is being forced to leave London because of her pitiful pay. Another has to be subbed £100 per month by her mum and dad in order to survive. Back at school the next day the staffroom was buzzing with demo stories. Someone had pinned the new rank and file teachers’ paper the Class Issue on the union noticeboard. Everyone was furious with ex-teacher Estelle Morris’s treacherous condemnation of the teachers’ action.

Messages of support at the rally from other groups of London public sector unions like Unison, the FBU and the RMT had made a big impact. Everyone was asking why we weren’t all striking together. Well, now the Unison call for a ballot to allow a strike on May Day gives us the chance.
KEN MULLER, North London

I THOUGHT I was really unlucky when I heard some of the things that were said prior to the recent London teachers’ pay strike. Comments went like this: ‘Oh, what a shame it’s only the NUT and not other unions’, ‘We’ll never get support from the general public’, and, ‘What difference will it make anyway?’

Yet on the day the strike was 99 percent solid in my school, and three of us picketed before going on the demo. Locals from a nearby housing estate brought us mugs of tea and let us use their loo.

Equally stunning are the things that have been said since the strike. They go like this: ‘Why the hell should I do that?’ ‘I’m not going to do it’, ‘I’m consulting my union before I agree to this’, and, ‘Who the hell does she think she is? I am not her servant. I have my priorities and she can either like it or stick it.’

It almost feels like working in a different workplace. We also found out this week that the council had backed down on its very unpopular plan to postpone pay day by one week.

The pace of change is incredible-it makes you wonder how fast things will shift once the real fight begins!
LINDA CARRUTHERS, East London 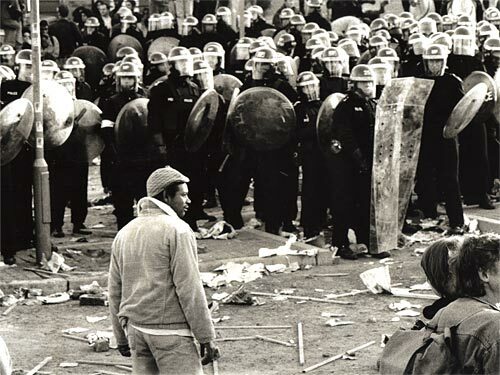 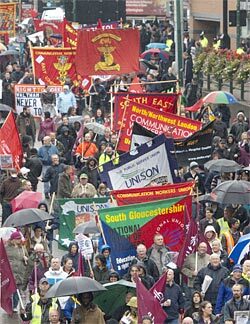 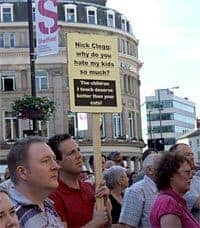