This article is over 17 years, 7 months old
THE PEOPLE of east London made sure the London Assembly and European Parliament elections will go down in history. In a result that will have shocked establishment politicians right up to Tony Blair, Respect swept across the boroughs of Tower Hamlets and Newham.
Downloading PDF. Please wait...
Saturday 26 June 2004

THE PEOPLE of east London made sure the London Assembly and European Parliament elections will go down in history. In a result that will have shocked establishment politicians right up to Tony Blair, Respect swept across the boroughs of Tower Hamlets and Newham.

In Tower Hamlets Respect beat all other parties to top the poll. We won with over 20 percent (10,611 votes), humbling New Labour, whose dominance of politics in the borough was ended when they came second to us on 19 percent (10,103 votes). The Tories and Liberals were easily beaten into third and fourth places. In Newham Respect got even more votes.

We got 21 percent (11,784 votes), coming second to New Labour, and beating all the other establishment parties comfortably. Never before in British political history has a new party achieved those kinds of results. Respect was only formed weeks before the election, and this was the first time we had ever contested an election.

The London-wide nature of the assembly and European Parliament elections meant that we just missed out on winning seats. But the 91,000 people who voted Respect across London, 5 percent, is still an amazing result for a new party. The east London result will be giving New Labour politicians, and those from other establishment parties, sleepless nights.

If last week had been a general election east London would now have Respect MPs, and if they had been council elections we would be the biggest party in Tower Hamlets and the main opposition to New Labour in Newham. We now intend to fight to make that a reality.

Unlike the establishment parties, Respect will not disappear between elections. We will work with and fight alongside people in their communities, workplaces and colleges.

We will continue to campaign against the war and brutal occupation of Iraq. We will oppose privatisation of public services. We will oppose the sell-off of council houses, and fight for decent, affordable homes for all. We will fight for equality and against racism, and against corruption in the town halls.

We will run against local New Labour MPs such as Oona King, Jim Fitzpatrick and Stephen Timms at the general election. A council by-election has been called in one ward in Tower Hamlets for 29 July. We will be fighting, and fighting to win, that seat.

ON THE weekend of 5-6 June, a new anti-imperialist and anti-capitalist force was born in Brazil, the Party of Socialism and Freedom (P-SOL). Around 800 militants from around the country gathered in Brasilia to debate and approve a political programme and elect a national directorate.

The new party is the response of the most militant sectors of the Brazilian working class and social movements to the growing attacks from the Workers Party (PT) government. The government, headed by Lula, was elected by millions of Brazilians on a platform of hope and change but has failed to offer an alternative to neo-liberalism.

It has cut social services, attacked public sector workers and diverted funds from social and economic development to pay off the external debt. Party militants who have resisted these policies have been undemocratically repressed and expelled.

This year many strikes and struggles have occurred, mainly in the public sector. Bank workers, auto workers and other sectors are set to take action. These struggles show that enormous possibilities exist for the new party. There are tens of thousands of activists in the unions and social movements ready to fight. We have no doubt that the Party of Socialism and Freedom is capable of attracting this vast militancy.

Our main task is to build grassroots committees to organise those searching for a left alternative to fight the ruling class and the politics of the Lula government.

IN THE European elections in Italy Rifondazione Comunista got 6.1 percent, which for us is a very positive result. It is 2 percent higher than the last European elections. I think it was because of our work in the movements, the anti-war campaign, and our stance against the neo-liberal politics of Silvio Berlusconi.

Our vote plus that of the Greens and two other left parties totalled 13 percent. This is an anti-war vote. The centre-left list dominated by the DS, the equivalent of New Labour, got 31 percent. The vote has penalised Berlusconi and his Forza Italia party very heavily.

Berlusconi got 10 percent less than in the 2001 general election. Berlusconi is now facing a serious crisis of credibility.

THE STOP the war movement and Respect, the party born out of the movement, have been more than vindicated. The lies of Tony Blair and his ilk have been exposed time and time again. Yet, even after the drubbing he received in the local and Euro elections, Tony Blair still insists he was right to go to war, is right about privatisation, and “knows what’s good for the country”.

A new mood and a new anger has entered the political mainstream. Millions of people the world over have marched against war, privatisation, oppression and poverty. Here this new mood, this new willingness to say enough is enough, has found expression in Respect.

The support Respect has gained in only a few months is immense. A new network of activists has been formed. Now is the time to redouble our efforts to ensure that all the hard work done by everyone involved in Respect is built on.

Libraries are in real decline

IN YOUR 10 June issue there was an article about Kent libraries cutting back on professional staff, downgrading others and putting extra responsibilities on the lowest paid.

As a library user, I find the same thing is happening elsewhere. They get rid of staff and books, particularly the most experienced staff and the most expensive research classics. I would like to know more about this, preferably from library staff.

LABOUR PARTY members are demanding early publication of the party’s 2003 annual accounts, which include vital membership data for the period Tony Blair took the UK to war against Iraq.

Accurate national figures have remained a closely guarded secret even from the party’s ruling National Executive Committee (NEC). Following the June election results it is vital that Labour Party members have time before annual conference in September to consider the impact of Iraq and other controversial policies on party membership.

I CAN’T thank you enough for the interview with Giovanni Pesce in last week’s Socialist Worker. I could wade through a library and not find an account of the period as good. Thank you again.

AS A regular reader of Socialist Worker I support the great majority of what appears in the paper. However, in the 10 June issue I was appalled by the tone of Chris Harman’s article on Ronald Reagan.

Throughout the article Harman used some of the most reactionary tabloid language possible for the occasion. As Harman points out, Clinton and Bush (Junior and Senior) have followed much of Reagan’s plans, making obvious the replaceable nature of Reagan.

The enemy, as I’m sure Chris is aware, is not Bush or Reagan. It is the system they use and the neo-liberal agenda they push. I disagree with everything Reagan did, but I feel the approach taken in the article was a reactionary ultra-left approach that undermined the work of our paper by reducing it to the language the Sun could use.

IN RECENT debates around the attack on Muslim women’s freedom to choose what to wear, even some who claim to be on the left have argued that we must keep religion out of schools.

Thing is, as an education authority worker, I could have sworn that half the schools in the country are Church of England or Roman Catholic and named after Christian saints. Am I suffering from some strange hallucination, or is it that Christianity doesn’t count as a religion?

WITH THE increasingly alienating debacle of Gay Pride approaching (3 July) it would be interesting to read in Socialist Worker how gay socialists plan on marking the occasion.

I spent last year’s Pride (perhaps appropriately) on the wrong side of the very big wall that separated those paying to celebrate their pride in Hyde Park from those not. 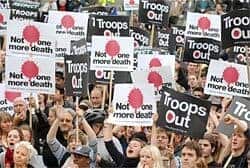 You should be a part of this