This article is over 20 years, 0 months old
THIS government's announcement that it is negotiating with private health providers to treat NHS patients doesn't just highlight the crisis in the NHS. It is a grotesque illustration of what the Private Finance Initiative (PFI) means to the NHS.
Downloading PDF. Please wait...
Saturday 05 January 2002

THIS government’s announcement that it is negotiating with private health providers to treat NHS patients doesn’t just highlight the crisis in the NHS. It is a grotesque illustration of what the Private Finance Initiative (PFI) means to the NHS.

The BUPA Redwood Hospital in Surrey is a two-storey wing attached to the back of an NHS hospital. It was built and paid for by the trust, and then leased to a private healthcare company for 30 years. That company has now been taken over by BUPA.

BUPA don’t want the hospital because it is in direct competition with their bigger hospital five miles away in Gatwick. In the five years since the hospital was opened NHS patients have been denied access to treatment. When I worked at Redwood four years ago only one floor was open, and only one of its two theatres in use at any time.

At no point in the previous nine months had bed occupancy reached double figures. BUPA’s eagerness to negotiate an exclusive deal with the trust suggests that things have not changed significantly in the hospital. All those empty beds, and next door all those patients lying on trolleys in corridors.

The contract will enable BUPA to make guaranteed profits, and possibly super-profits. All this by using a hospital built by the NHS, treating patients who would have already been treated if the hospital had not been leased to BUPA in the first place. That is the twisted logic of PFI.
SUE FLEETWOOD, Ellesmere Port

Will the Record label officers as ‘low lifes’ too?

SCOTTISH Socialist Party MSP Tommy Sheridan could be forgiven for having a quiet chuckle to himself on hearing last month’s statement by the Association of Chief Police Officers (ACPO). It called for the decriminalisation of heroin. For much of the past year Sheridan has been vilified as a ‘low life’ by the Daily Record, the mouthpiece of New Labour in Scotland, for daring to call for the decriminalisation of cannabis.

He argued to break the link with hard drugs and for the provision of clean pharmaceutical heroin on prescription to those not yet ready to come off the drug. The SSP has campaigned hard on the issue, including the organisation of two successful demonstrations.

We haven’t called for a hypocritical ‘war on drugs’ (which somehow leaves out alcohol and tobacco), but for a war on the poverty which gives rise to hard drug use.

Now the ACPO is proposing that addicts are no longer treated as criminals if they agree to register and inject prescribed heroin under medical supervision. Socialists in Scotland are now waiting for an apology from the Daily Record editor to Sheridan and the SSP.
IAIN FERGUSON, Glasgow

Dying for a future

EUROPEAN UNION leaders met at the end of last year in Brussels to discuss tightening security on Europe’s borders. They had clearly not been moved by the eight people who died on arrival in Ireland after travelling across Europe in a freight container. The Irish government shed a few crocodile tears, and then announced that it would push ahead with the deportation from Wexford of the Kolesnikov family from Tajikistan.

The war and economic recession can only mean more people put their lives at risk to flee their country. The 13 refugees who travelled in the container were Turkish, Kurdish, Algerian and Albanian.

Within minutes of leaving port in Belgium they became unconscious through lack of oxygen. One of those who died tried to attract attention by banging on the inside of the container before falling into a coma. The ordeal of one of the families, the Pancars from Turkey, began seven years before.

Their small grocery shop went bankrupt when half of their village’s 1,000 people migrated to find jobs.

The family joined the exodus and went to Istanbul, where Hasan Pancar worked as a driver and his wife Kadriye worked in a factory. But the two lost their jobs two months ago amid the latest economic crisis. They decided to try their luck in Europe.

Hassan died in the container and Kadriye was rushed to hospital. The chaos of the system forces people to migrate, and then criminalises them for doing so.
SIMON BASKETTER, Dublin

THE demonstrations in Brussels before Christmas shattered any argument that trade unions cannot mobilise for marches or that 11 September put an end to the anti-capitalist movement. The trade union organised march on 13 December was massive. It was made up of substantial workplace delegations from across Europe.

I AM writing to express strong disagreement with Matt Brown’s letter (Socialist Worker, 22 December), arguing that ‘there are atrocities on both sides’ in the war between Israel and Palestine.

We do not equate the violence of the oppressed with that of the oppressor. The ruling class uses violence to maintain a system of exploitation of the majority by a minority. The oppressed use violence as a means to try to fight against their oppression.

Israel is a state founded on the basis of a bloody war that expelled over 800,000 Palestinians from their homes. Many of these refugees suffered further horrors when Israel invaded the West Bank and Gaza in 1967.

Israel’s brutality, backed by the US, is responsible for the desperate acts of suicide bombers who see no end to the Palestinians’ suffering. As socialists we argue that terrorism is not a solution and cannot defeat the might of Israel.

But we unconditionally stand with them in their struggle because they should be allowed to live peacefully in a country that is rightfully theirs. There will never be peace until the racist state of Israel is replaced by a secular, democratic one that respects the rights of all.
SIMON BEHRMAN, North London

I HAVE just discovered your website, and I am feeling a bit frustrated that the majority of your articles merely point out the injustices happening in the world without any mention of a remedy. I would like to see contained in each article a new and innovative socialist solution to the problems mentioned. I read articles that slam businesses for laying off workers, and slam other businesses for cutting hours and pay. Obviously in a worldwide recession one or the other must happen!
PAUL KNOPP, US

Blunkett lashes out at victims

DAVID BLUNKETT attacked immigrants in Britain at the end of last year for not integrating into ‘British’ culture and for not learning to speak English. But government cutbacks in services for interpreters are responsible for condemning those who don’t have English as their first language to a life of isolation.

I have seen in my work how damaging this can be. A lot of people end up going for cancer treatment without a health advocate to interpret for them. This means young children end up translating medical diagnoses that can be distressing to parents.

When I was working in a maternity ward I saw a woman clearly about to go into labour but with no advocate on hand to translate for the nurse. The family thought they were being told to leave the hospital, and began trying to leave despite the woman’s condition.

The trusts fight over who provides the service because there is a battle over who has to pay. New Labour’s underfunding means the service ends up being considered a luxury rather than a necessity.
HEALTH WORKER, East London

I HAVE had three benefits stopped on the excuse that a benefits book that should never have been sent out has disappeared. The government makes out that it wants to encourage people back to work, and it tricks them with false benefits that don’t exist.

My father, who is 73 years old and disabled, has not had any money from the social security for 24 weeks. I can no longer support him financially. This is barbaric in Britain today.
JAQUELINE CUTHBERT, East London

MANY universities are set to remember the Holocaust later this month. We should urge all colleges to mark the remembrance day for all those who lost their lives.

But we should also turn Holocaust memorial day into an anti-Nazi day too. Stop Nazis like the British National Party and National Front now, before they are any more trouble.
RICHARD STEPHENS, Bristol 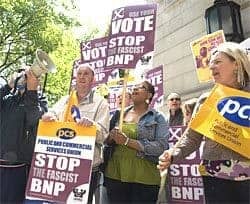 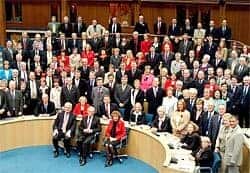