War as a video game

This article is over 17 years, 2 months old
The mainstream media have covered the devastating US assault on Fallujah as if it were a video game, using cartoonish graphics to depict attacks which have cost hundreds of lives.
Downloading PDF. Please wait...
Saturday 20 November 2004

The mainstream media have covered the devastating US assault on Fallujah as if it were a video game, using cartoonish graphics to depict attacks which have cost hundreds of lives.

Let’s just list some of the outrageous assertions and omissions in the news today. They have regurgitated the line that Abu Musab al-Zarqawi is based in Fallujah, despite the absence of any evidence supporting this claim.

They have peddled the line that the 600 people killed so far in that attack are “insurgents”. But the usual death rate for civilians in Iraq is roughly eight civilians for every one “insurgent” killed. So if those 600 dead are really insurgents, that leaves 4,800 civilians dead.

Eyewitness reports say that the streets of Fallujah are littered and stinking with bodies. Possibly up to 150,000 civilians were trapped in the city by US tanks while their homes, schools, mosques and hospitals were bombed.

Yet little of this makes the television news. Instead the US tanks and fighter planes visiting immeasurable suffering on Fallujah are described in clinical terms, or using heroic Hollywood cliches.

This propaganda is designed to be demobilising. You can’t have a debate with the television screen, and it’s easy to be left feeling impotent.

We desperately need a new grassroots media that will expose the lies.

But we also need to take up more refreshing activities. How about a stroll through the city centre with your local Stop the War Coalition?

Politicians love to talk to their constituents too, so what could delight them more than a small army of them arriving on the doorstep of the surgery?

And if you feel like a nice chat, why not get the BBC’s complaints department on the phone and offer some suggestions as to how they can improve their coverage?

Any of that beats passively absorbing the torrent of mind-numbing gibberish inflicted on us by news programmes.

AC Smoking out the tobacco giants

As the debate rages over the possible introduction of a smoking ban in Scotland, I thought comrades across the water would be interested in our experience here in Ireland.

With a lack of proper community centres or meeting rooms, often the only place activists could meet in Dublin was upstairs in a local pub.

Oftentimes, they’d stagger out from a meeting on The Day After Tomorrow—how we can save the environment? with half a lungfull of tar.

Socialists supported Mandate, the bar workers’ union, when it called for a smoking ban. Those represented by the union work long hours and can be exposed to huge amounts of smoke.

Big tobacco and the powerful Vintners Federation opposed this protection of workers’ health, citing dodgy reports that profits would collapse and the Irish pub as we know it would be destroyed.

Months later, they have been proved wrong, and the pub is now a healthier and cleaner place.

Many people are now trying to kick the habit. Many more have cut down considerably.

Marlboro, Rothmans and Benson and Hedges are not the friends of the workers—tobacco is a drug built on slavery and cancer.

The sooner we get rid of it and legalise marijuana, the better!

Alex Callinicos (Socialist Worker, 13 November) echoes the widespread judgement that “values” were central in the US elections, and that Bush won by appealing to the backwardness of ordinary people on issues like abortion and gay marriage.

In fact there is little evidence for this. Polls show that the percentage of voters who were anti-gay, anti-abortion and so on, and were voting on these issues, was no higher than in previous elections.

Neither Bush nor Kerry made much of values issues in their campaigns. Bush ran on terrorism, Kerry on jobs and the economy.

Bush did not win by mobilising the Christian right—evangelicals did not make up a higher proportion of voters than in the past.

Bush did manage to win support on the question of fighting terrorism, and that was probably decisive.

But when one considers that he enjoyed over 90 percent support soon after 9/11, the fact that the election ended up being as close as it was shows how badly things have gone in Iraq, and gives us some reason to hope.

Troops can say no too

We at Veterans and Families for Peace UK are interested in making contact with any ex-services personnel who left the armed forces through conscientious objection.

We feel that this avenue would be the best way for serving soldiers to have their objections to this illegal occupation heard.

Most soldiers who disagree with the army usually go absent without leave, and this only results in further punishment for them.

We would like to hear from anyone who has been through this process so we can advise serving soldiers of their rights. Please send an e-mail to [email protected]

ONE OF the reports of the successful PCS civil service workers’ union strike on 5 November that was missed in the coverage (Socialist Worker, 13 November) was Liverpool.

There was a complete shutdown of benefit offices, tax offices, customs, law courts, the passport office, government call centres and virtually every other civil service workplace across Merseyside during the one-day strike.

Nearly 300 pickets gathered by the Victoria monument outside Liverpool Crown Court for a march down Lord Street to a strike rally.

But the loudest applause was for striking Liverpool social worker Kathy Orritt. It was reported to the meeting that Unison members had refused to cross PCS picket lines at one- stop shops.

Peter Kilfoyle, Labour MP for Walton, which contains the doomed Liverpool pension centre, sent an apology and message of support.

The union cannot afford to lose the momentum from the strike and must reballot for more national action.

Nottingham Respect activists were disgusted to find out that David Blunkett and his ministerial team were visiting the town on Friday 5 November.

They planned to use the fatal shooting of Danielle Beccan, a 14 year old from St Anns, to push their agenda of Anti-Social Behaviour Orders and increased stop and search powers.

The local Respect group addressed an open letter to Blunkett criticising his policies, and the lack of funding and facilities for young people in Nottingham, which are writing off a whole generation of ordinary young people.

The director of the Nottingham Association of Caribbean Families and Friends and the editor of the Invitation, a Muslim family magazine, also signed. A visually impaired social worker who signed the letter was so behind the action that he transcribed it into Braille for Blunkett to read.

Unsurprisingly, Blunkett did not make himself available to the public. Therefore Respect activists were unable to hand over the letter to him in person. However, they have posted it to him and are awaiting a response.

Get behind this protest

Jaguar shop stewards are hoping for the maximum turnout for their demonstration on 27 November in Coventry to save jobs.

They estimate that around 2,000 jobs in the city will be lost in addition to those inside the plant.

Geoffrey Robinson MP has sent a leaflet to every house in his constituency asking people to join the march. Transport has been booked from Ford’s Daventry plant, and the taxi makers Carbodies are keen to help advertise it.

Leafleting to build the demonstration attracts workers who have faced redundancy more than once. Rolls-Royce, Massey Ferguson, Alvis and Peugeot have all closed plants and shed workers in the last few years.

Whole families share this experience. There is a feeling that the Jaguar closure is the final straw.

A big show of solidarity on 27 November will give Jaguar workers the confidence to vote for strike action in the ballot.

No crackdown in Ukraine

I would like to point out a few errors in an article by Dave Crouch on the Ukrainian elections (Socialist Worker, 13 November).

It is incorrect to state that Yanukovych has control over the main TV channels. Two channels support Yushchenko.

I AGREE with Mike Sillers (Socialist Worker, 13 November) that it was right to vote against the proposals for a north east regional assembly.

But in France there is an elected official for every 116 electors. Britain’s “accountability gap” offers one for 2,600. Most Europeans can name who is in charge of their municipal services. Few Britons can.

Hypocrisy of the clergy

Can I just say that it was refreshing to read the centre pages in Socialist Worker on women’s right to choose (6 November).

Anti-abortion groups like SPUC and LIFE are heavily infiltrated by Catholic priests.

Only about 1 percent of priests show concern for human beings once they are born—so why the fanatical interest in the unborn?

Jesus loved everyone, except religious hypocrites.

Why do they prop up Blair?

The recent Labour Party conference, where prominent trade union leaders voted against the motion calling for troops out of Iraq, thus saving Blair, should not go unmentioned.

Why do trade union leaders still rush to support Blair, even when he goes against their wishes and their interests?

the government’s plan for disclosure of past convictions, acquittals and “character evidence” as “evidence” in court is a vicious attack on the rights of working people and ethnic minorities.

There will now be no need for evidence after a first conviction or acquittal, and the police will go after the “usual suspects” again and again.

When Tony Blair speaks of people “playing the system”, he means the exercise of any right that will give defendants any justice.

One in three men, and a higher proportion of manual workers and the unemployed, have a criminal conviction.

These measures will produce a dangerously alienated underclass in the inner city and rural slums, and particularly among ethnic minorities.

Tube workers are not safe with Blair in charge

Let's go to the World Social Forum in Caracas 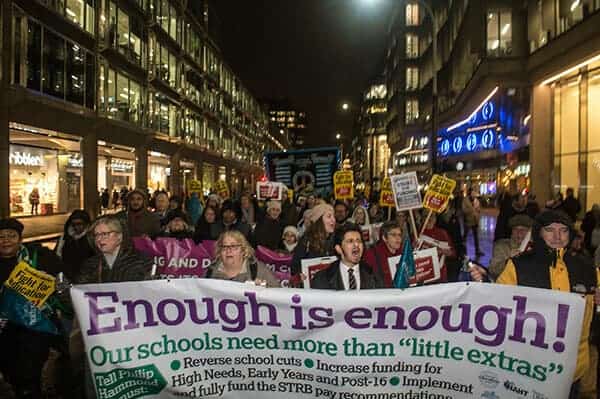