THE Palestinian campaigner Professor Edward Said spoke on the Palestinian fight for justice to over 1,200 people in central London on Friday of last week. The meeting, organised by the Lebanese Graduates of Britain, showed the huge level of support there is for the Palestinian people. Said described Ariel Sharon, the new Israeli prime minister, as a “war criminal”.

Sharon has been threatening the Middle East with a new war by the invasion of Palestinian territory and attacking Syrian troops in Lebanon. “The US are worried that Israel may get out of hand and disturb the smooth flow of oil,” said Said. “They want to retain the status quo.”

Said also exposed how the official peace process means that Israel will continue to control huge swathes of land in the Gaza Strip, West Bank and East Jerusalem-areas which it illegally occupied in 1967. There was massive support at the meeting for the new intifada, or uprising, which exploded six months ago.

This was shown by the huge round of applause which greeted a picture of Said throwing a stone at a distant Israeli outpost in southern Lebanon last year. “We have to find resources of hope,” Said stated. “The hope for us is in the new generation. The main goal of the Palestinian struggle is emancipation, liberating ourselves and others.” 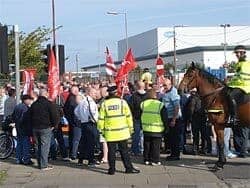