This article is over 20 years, 1 months old
PIC 1 BACK TO the 1960s: Why did the US police arrest Pigasus the pig in 1968? (a) He was regarded as a \"non-white\" trying to enter a whites-only restaurant. (b) He was \"causing trouble\" as Yippie presidential candidate at the Democratic Party convention. (c) He had urinated on a US flag at an anti-war protest.
Downloading PDF. Please wait...
Saturday 22 December 2001

PIC 1 BACK TO the 1960s: Why did the US police arrest Pigasus the pig in 1968? (a) He was regarded as a ‘non-white’ trying to enter a whites-only restaurant. (b) He was ‘causing trouble’ as Yippie presidential candidate at the Democratic Party convention. (c) He had urinated on a US flag at an anti-war protest.

PIC 2 WHO WAS gobbled by this heroic turkey? (a) George W Bush. (b) Bill Clinton. (c) Tony Blair.

(1) ‘IT IS expected of us to lead during this difficult time, to inject some energy into the economy.’ Who was outlining their responsibilities? (a) Anji Hunter, ex-Blair aide, on her new employer, BP. (b) Clare Short on ‘nation building’ in Kosovo. (c) Farouk Fannoush on importing Coca-Cola to the Palestinian territories.

(2) ‘I CAN’T explain it except to say that the lights are definitely going on and then they go off.’ Who couldn’t explain more? (a) Turner Prize winner Martin Creed. (b) Scottish Power boss Ian Russell on power cuts caused by recent strikes. (c) John Armitt, new head of Railtrack, on signals passed at danger (SPAD) incidents.

(3) WHO SAID, ‘We are going to try and kill as many of the Taliban as possible’? (a) US deputy defence secretary Paul Wolfowitz. (b) General Dostum, Nothern Alliance (Uzbeki faction). (c) Ismail Khan, Northern Alliance (pro-Iranian faction).

(4) ‘LINE DANCING is as sinful as any other type of sexual gestures and touchings.’ Who defended the nation’s morals? (a) Ann Widdecombe. (b) Ian Paisley. (c) Dolly Parton.

(5) WHO WORRIED that ‘there are many people who feel very strongly that we’ve betrayed what the Labour Party stood for. They will not be pleased with the government’? (a) Neil Thompson, Socialist Alliance candidate for St Helens. (b) Tony Blair. (c) Roy Hattersley.

(6) ‘WE HAVE to constantly remind people that military action may last indefinitely.’ Who issued this warning? (a) Donald Rumsfeld. (b) George W Bush. (c) Jack Straw.

(7) WHO BRAVELY claimed, ‘May Day rioters will be fighting for all of us’? (a) Naomi Klein, anti-globalisation campaigner. (b) Suzanne Moore, journalist. (c) Bono, lead singer of U2.

(8) WHO PREDICTED that ‘failure could certainly condemn us to a long period of irrelevancy’? (a) UN secretary general Kofi Annan on Palestine. (b) Michael Moore, director of the WTO, on the talks in Qatar. (c) Kenneth Clarke on his Tory leadership bid.

(9) WEEKS AFTER the 11 September attacks the US signed its biggest ever contract for building fighter jets with Lockheed-Martin corporation. What was it worth? (a) $10 billion. (b) $100 billion. (c) $200 billion.

(10) ‘PEOPLE LIKE me should not be in the position to rob other people of a home.’ Who was pricked by their conscience? (a) Michael Meacher, Labour minister. (b) Madonna, millionaire singer. (c) Lord Sainsbury, New Labour’s millionaire grocer.

(11) WHICH CELEBRITY boasted that their butler had a butler? a) Shaun Woodward, Labour MP. (b) Prince Edward. (c) Victoria Beckham.

(13) ‘TICKETS CAN be purchased on either an individual basis or per table-with the opportunity of acquiring a gold or silver table.’ What was the event? (a) Labour Party conference reception. (b) Manchester United shareholders’ meeting. (c) The queen’s golden jubilee garden party, planned for 2002.

(15) WHICH PUBLICATION was accused of speaking for ‘Trotskyite minorities’ by Italian right winger Gianfranco Fini? (a) Socialist Worker. (b) Private Eye. (c) Economist.

(18) THE NORTHERN Alliance are ‘not nearly as bad as some people make out’. Who gave this hostage to fortune? (a) Colin Powell, US Secretary of State. (b) Clare Short, minister for overseas development. (c) Geoff Hoon, defence secretary.

(19) HOW MUCH did Clare Short’s department for overseas development pay accountants PriceWaterhouseCoopers for ‘consultancies’? (a) £12 million. (b) £35 million. (c) £44 million.

(20) HOW MUCH was raised from corporations for confetti, drinks and nibbles at George W Bush’s inauguration as president? (a) $5 million. (b) $17 million. (c) $71 million.

(22) WHO SAID, ‘Jeffrey Archer is a candidate of probity and integrity. I am going to back him to the full’? (a) William Hague. (b) Ann Widdecome. (c) Shaun Woodward.

(24) WHEN A school kid asked him to describe the White House, what was George W Bush’s reply? (a) The historic residence of US presidents. (b) The living heart of our great democracy. (c) White.

Fill in the missing words:

(26) ‘AN OUTSIDER might conclude that **** were on strike,’ Buckingham Palace official. (a) Prince Charles’s PR staff. (b) The Wessexes. (c) Clients for Prince Edward’s Ardent TV company programmes.

(27) ‘IF YOU want to know why so many intelligent but impressionable British youths are to be found each May chanting against the evils of capitalism and lobbing bricks at McDonald’s, you need look no further than the ****,’ Ross Clarke, Spectator magazine. (a) Length of time they have been untested by war. (b) Lack of national service. (c) National curriculum for geography.

(28) ‘Once you’ve been to Cambodia, you’ll never stop wanting to beat **** to death with your bare hands,’ Anthony Bourdain, New York chef. (a) Pol Pot. (b) David Puttnam, producer of The Killing Fields. (c) Henry Kissinger.

PIC 3 WHERE WERE George Galloway and Tommy Sheridan arrested? (a) At a protest against sanctions on Iraq .(b) On a picket line for the Scottish Power workers. (c) On an anti-nuclear protest at Faslane.

The ‘war on terror’ and the US on the web 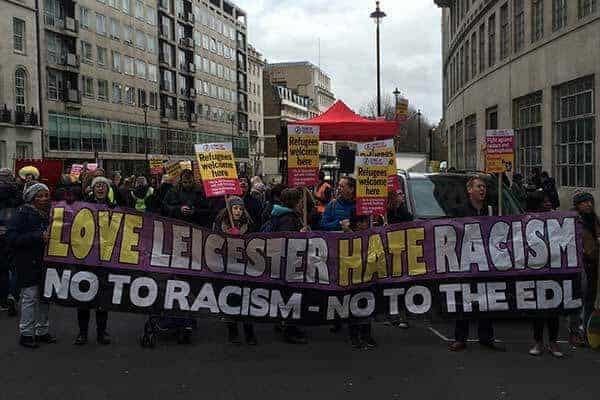 Syria: Protests force the cabinet out