The biggest trade union demonstration Britain has ever seen took place last Saturday. It was an incredible sight. Well over half a million people marched. Banners, placards and balloons filled the streets.

For more than five hours the magnificent demonstration, organised by the TUC, weaved its way from Embankment towards Hyde Park.

Many of those marching were visibly moved to see so many workers coming together.

“This feels historic,” said Lynn from Nottingham, who joined the protest with her daughters. Craig Johnston, from the RMT union’s national executive, described it as “absolutely amazing”.

He added, “This is not the end. It’s the beginning.”

People began assembling before 8am on Embankment. And it soon became clear that this march was much bigger than the “usual suspects”.

Huge union delegations joined the protest—from big unions like Unison to relatively small unions like the bakers’ union BFAWU. Socialist Worker recorded more than 950 banners on the protest. The working class was taking to the streets.

Many people came who had never marched before. Others had protested against the Tories during the 1980s and were returning to the battlefield. There was a real sense of class anger—and disgust at the Tories and the rich.

Steve, a voluntary sector worker from Bradford, said, “The Tories are waging class war. The bankers should pay for the chaos they’ve caused. We need to make Britain ungovernable.”

Pauline Akrill, an RMT member, added, “I was on the poll tax demo. Protest can make a difference.”

One feeder march from Kennington Park in south London brought more than 3,000 people to the Embankment. And some 2,000 students and education workers marched from the University of London Union on Malet Street.

Safiq came to the march from Birmingham. “People are getting desperate,” he said. “Where we live there are more and more shops boarded up and more people on the dole. We can’t stand by as our communities fall apart.”

Homemade placards added a touch of humour to the protest. “It woz the bankers!” one simply pointed out. Another asked, “Where’s Robin Hood when you need him?”

One enormous banner featured a cartoon of David Cameron with the words “Let them eat cake”.

Kevin Joss from Ashton-under-Lyne in Manchester came dressed as a butcher with the sign “G Osborne & Co Society Butchers”. He said, “I work in libraries. About 800 will close in the next 12 months—while the rich ride off into the sunset with the loot.”

Many people had stories of the awful impact of the cuts. Gareth Roach said, “I work for Greenwich council—until Thursday when I’ll become redundant.

“I’ve worked there for 22 years. It’s a strange feeling. I don’t know what the future holds.”

Other workers spoke of how cuts were destroying services. Barbara Baker, a prison officer from Durham, said staff cuts were harming prisoners.

“Prisoners’ time out of cells is vastly reduced,” she said. “They’re treated like caged animals.”

And it wasn’t just public sector workers on the march. Many private sector workers were there too, as well as activists from a variety of campaigns, students and pensioners.

One cabin crew member told Socialist Worker, “We were the first to start fighting against these capitalist bastards and we’re still fighting.

“We’re here in solidarity with everyone else.”

Mohamed, a refugee support worker from Cardiff, said, “Today has to be the beginning of a persistent and sustained campaign against this government.”

Joe Glenton, the British soldier jailed for refusing to fight in Afghanistan, was there too. “I feel at home here,” he said. “I have developed a passion for antagonising the state—and this is where it’s going to happen.”

Protesters had different opinions on the cuts. Some said there was a need for some cuts, but that the Tories were targeting the wrong things.

But there was also a widespread feeling that the money’s there to pay for jobs and services and we need to take it from the rich. As one London firefighter put it, “We’re all in it together apparently, but just two days ago MPs changed the rules to get more expenses.

The march set off from Embankment at 12 noon—but even by 5pm, people were still entering Hyde Park.

The end of the protest didn’t leave Embankment until around 3pm. It was so big that some marchers got nowhere near Hyde Park before having to leave to get their transport home.

Along the way, some protesters occupied the posh Ritz hotel and the rich people’s Fortnum and Mason food store. Thousands more gathered outside.

As trade unionists on the march passed the shop, they stopped to cheer.

Althea Nesty, a GMB union member, said, “I think what the occupiers are doing is brilliant—it’s exactly what young people should do. That’s what I did when I was young.”

And as the demonstration passed Trafalgar Square, some marchers stopped to join crowds in the square and the surrounding streets.

Several hundred people stayed there for a rally and, inspired by Egypt, an occupation of the square. Protesters who had earlier targeted shops on Oxford Street came to join them.

There was a party atmosphere. But after dark, riot police took their chance to move in with batons. They had spent the day hyping up the so-called “violence” of protesters—but the real violence came from the cops.

The state and the right wing press have whipped up a panic over Trafalgar Square, and used it to downplay the mass march. That’s because they are terrified of the power that workers have when they come together.

But everyone who marched knows how big the protest was. And they are more confident now than they were before the demonstration.

Time and time again, protesters said the march must be the start of large-scale resistance to the Tories. They can see the enormous potential power workers have to bring the government to its knees.

As Kristella, a PCS union member from Cheltenham, put it, “I am proud after marching today. I think we need to go on strike next, all the unions together. If we all do it, it will cripple the country.” 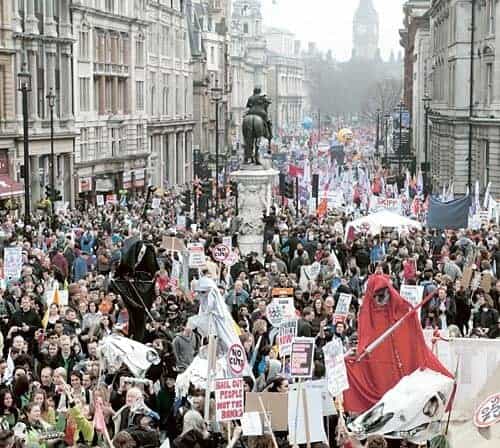