Biggest ever demonstration in Austria

IT WAS the largest demonstration in Austrian history. Some 300,000 people converged from four points in the centre of the capital, Vienna, on Saturday to protest against the far right Freedom Party and its leader, Jrg Haider. They rallied in the Heldenplatz, a huge square near the main government buildings. The rally was bigger than the one held by Hitler in the same square in 1938.

Haider’s shocking breakthrough has generated the most incredible resistance to him and his party in a country once renowned for its conservatism and decades of social peace. It has also acted as a lightning rod, drawing the pent-up frustrations of millions of ordinary Austrians into an outpouring of anger, hope and demands for change. The Tory-led coalition government, containing six far right ministers, is paralysed.

The demonstration and rally represented a huge swing to the left. Dolores Schmidinger, a cabaret artist, spoke from the platform. She said, “This brilliant rally is a sign not only to the rest of the world that most people in Austria reject Haider. It is also a boost to our own confidence. “A journalist asked me a few moments ago if I was worried about the breakdown of consensus in Austrian society. I am not worried about it. I am proud of it.” Renate Tchurgiz is a leading figure in the GB, the equivalent of the TUC. She outlined the Thatcherite cuts package the government wants to introduce.

“Workers in this country are confronted with a terrible austerity package,” she said. “Austria threatens to become an unjust and unequal country. We will not let that happen. We want a country where racism, foreigner bashing and anti-worker policies are broken. For that we will fight every day. Resistance is necessary. It must go further. The new economics minister says there is no opposition between capital and labour. But we all know there is an opposition between capital and labour. That’s why we will stay and fight together in solidarity.”

There were roars from the crowd, which had packed the square while there were still 40,000 people trying to get in. A cry of “Widerstand!” [resistance] went up.

SOME 10,000 school students walked out of classes and marched in Vienna on Friday of last week. Glay Aslanoglu, aged 14, told Socialist Worker, “This is the first time I have been on strike. It is fantastic. We will never be the same again. I am from an immigrant family and I know what happened to the Jews in the Second World War. There should be a new government. But it must be without any racism or prejudice at all. We want to topple the government.”

School students chanted, “Strike in the schools. Strike in the workplace.” Art students hung a banner 20 feet deep by 50 feet wide. It read, “The art of the hour is resistance.” Heide Weiler, a 72 year old pensioner, said, “These young people are Austria. Haider is not Austria. They face attacks from the new government. So do we pensioners. I know what Haider would like to achieve. I say, ‘No Pasarn’ [‘They shall not pass’].”

Mehmet Ali, aged 11, said, “We want total change. Away with Haider. Away with racism. Better conditions for everybody. I will resist. There should be a revolution. Nothing else is working.”

‘The power is on streets’

THE TRADE unions were the backbone of Saturday’s mobilisation. Their section of the demonstration was a sea of banners representing engineers, teachers, white collar workers, the rail workers’ union, the food and drink union, and many others. The largest contingents were from supporters of the Social Democratic Party, like Britain’s Labour Party, in the trade unions. There were no party political speeches. But many of the speakers were supporters of the Social Democratic Party, which ran Austria, often in coalition with the Tory People’s Party, for 30 years.

Stephanie Kreisler, a nursery nurse in Vienna, told Socialist Worker, “This new government is trying to undo 50 years of social progress. It is worse than a normal government of the right. Haider is a fascist and he is pulling the strings even though he is not in government. “Of course I want the Social Democrats back, preferably in coalition with the Greens. But the power we are showing on the streets today is the thing that really points to a different future. I have always voted Social Democrat. However, the last government was terrible. Only Haider can bring me to vote Social Democrat again. We will need such mobilisations as these in the future, no matter who is in government.”

The build-up to Saturday’s protest has reinvigorated many trade unionists. Werner Hecht, an engineer from the Siemens factory in Vienna, told Socialist Worker, “We made up a banner against Haider and the new government. The atmosphere at work has changed over the last three weeks. “Before the government was formed people were depressed by the manouevring over what kind of coalition we would have. But when the Freedom Party and People’s Party got in and announced big attacks there was shock. The trade unions have built at all levels for this march today. The most exciting thing is that long-standing members of the union at my work now see a point in getting active.” Labour movement leaders do feel under pressure from their members.

The Social Democratic Party executive put forward a left of centre candidate, Alfred Gusenbauer, to replace its outgoing leader on Friday. They had wanted to select a right winger whose politics are close to Tony Blair’s. But they were inundated with faxes and calls from party members opposing a shift to the right.

“THIS GOVERNMENT has no democratic legitimacy. We have taken over the squares and the streets. The government has gone underground.”

MANY COMMENTATORS in Britain predicted that diplomatic sanctions by European countries and protests in Austria would strengthen Haider. The opposite has happened. Three in four Austrians want the Freedom Party out of government, according to the latest poll. Some 43 percent of people believe there will be more strikes. There is a rising feeling that resistance can topple the government. The Freedom Party’s standing in the opinion polls is less than it was before the government was formed and the protests started.

That electoral support is fragile. Half the Freedom Party’s voters do not want to see its leader become chancellor. The Tory People’s Party has slumped in the polls. The Freedom Party says it will call its own rallies. Haider has threatened to cut state funding for the trade unions in his home province of Carinthia. He is making aggressive and provocative speeches. But he confronts a country that in the main is swinging to the left.

Mass opposition has already forced the government to hold back from announcing its full cuts and privatisation programme. Increasing numbers of people have had enough of official politics. More people talk of the need for a movement like the one which toppled Stalinism in neighbouring Czechoslovakia in 1989. Last Saturday showed the potential to kick the far right out of government within weeks. But for that to happen more is needed than the weekly demonstrations proposed by the mainstream leaders of the opposition. It requires mass strikes and the kind of protests that can make Austria ungovernable.

Haider gets a bellyful

PEOPLE LEAVING the demonstration spotted Haider having a meal with his wife. They surrounded the restaurant and Haider had to be bundled out. The protesters’ action is a sign of how the confidence generated by Saturday’s demonstration can feed into organised opposition to the Freedom Party wherever it tries to organise.

On Friday night thousands took to the streets in Athens and Amsterdam. Protests in Canada forced Haider to cancel his insulting visit to a Holocaust memorial. There were delegations from other European countries on the Vienna demonstration. They included a contingent organised by the Anti Nazi League in Britain. On Friday school students from Britain marched behind a banner headed “Rebel”. 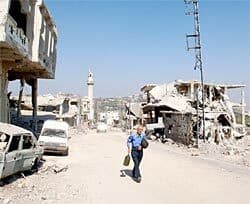