This article is over 12 years, 2 months old
There was an angry lobby by 400 Nottinghamshire county council workers at lunchtime on Thursday of last week.
By a Notts Unison member
Downloading PDF. Please wait...
Tuesday 10 November 2009

There was an angry lobby by 400 Nottinghamshire county council workers at lunchtime on Thursday of last week.

A leaked report by the newly-elected Tory council detailed plans to make major cuts to services.

The protesters waved placards with slogans such as “Say no to Cutts” – in reference to council leader Kay Cutts. Denise Smith, joint branch secretary for the Unison union, said, “We need preserve the service we provide to the public.”

There were cheers as the result of a Unison indicative ballot was read out. 87 percent have voted in favour of industrial action.

The council’s chief executive also spoke, trying to justify the cuts – but he was met with boos and calls for his resignation. 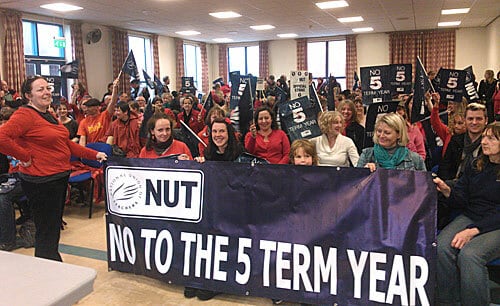