This article is over 12 years, 2 months old
Over 200 British soldiers have died in Afghanistan since 2001, more than 90 this year alone.
By Chris Bambery
Downloading PDF. Please wait...
Tuesday 10 November 2009

Over 200 British soldiers have died in Afghanistan since 2001, more than 90 this year alone.

That’s one of the reasons why polls last weekend found that 63 percent in Britain want the troops out as soon as possible.

Military chiefs say there will be five more years of combat there. But even that is an optimistic estimate.

There is no effective state and none has existed in three decades of war. The idea that US and Nato forces will hand over to a stable Afghan government is a pipedream.

Having told us British troops were in Afghanistan to catch Osama bin Laden, then to overthrow the Taliban, then to bring democracy, we are now told that the troops are there to keep us safe.

But the fact the war has spilled over into Pakistan makes the world a more dangerous place.

Three decades of foreign occupation and intervention has reduced Afghanistan to a hell and, as in the past, this breeds growing resistance.

Across Britain people—not least growing numbers of military families—want the troops out now. The politicians must be forced to listen and act accordingly. 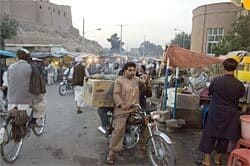 Eyewitness from Kabul—disillusionment is growing