This article is over 11 years, 1 months old
Thousands of anti-war activists marched through London on Saturday in protest at the continuing occupation of Afghanistan.
Downloading PDF. Please wait...
Tuesday 23 November 2010

Thousands of anti-war activists marched through London on Saturday in protest at the continuing occupation of Afghanistan.

School and university students protested alongside workers and other campaigners.

The Stop the War Coalition, CND and the British Muslim Initiative organised the demonstration.

Nazreen, a school student from Hammersmith in west London, told Socialist Worker, “I marched against the bombing of Gaza last year outside the Israeli Embassy.

“The war in Afghanistan is ruining people’s lives, there and here. I’ll keep marching until the wars stop.”

Her friend Ellen added, “Marching shows that people care and that we are not alone.

“We have to tell the government that people don’t agree with what they’re doing—the war, the cuts, everything. They spend all this money on war, then say it’ll be £9,000 a year to go to university.”

The day before the protest, Joe Glenton, the British soldier who refused to return to Afghanistan, handed his veteran’s medal back to Downing Street.

Joe told Socialist Worker, “I don’t need this medal to remind me of my time in Afghanistan—I remember every moment of it.

“There is a groundswell of feeling against the war and I’m proud to be a resister.”

Members of military families led the protest—including Joan Humphries whose grandson Kevin was killed in Afghanistan and Joe Glenton.

A rally in Trafalgar Square was addressed by representatives of trade unions, Muslim organisations and peace groups.

Phil Shiner, a prominent human rights lawyer, told the crowd, “You will have heard of Baha Mousa, who died with over 90 injuries after being held by British soldiers.

“But there are hundreds more and who died or disappeared after being held and tortured by British forces.”

Shiner is currently representing 222 Iraqis who have been held and tortured by British troops.

Lindsey German, national convenor of the Stop the War Coalition, said the warmongers claimed to be for democracy in Iraq and Afghanistan but that “if there was democracy here the troops would be out tomorrow”.

Seamus Milne, a columnist for the Guardian, said, “In Lisbon today the Nato leaders will try to make it appear that they are bringing an end to this war, a war that is now in its tenth year. This talk of an exit strategy is clearly a sham.” 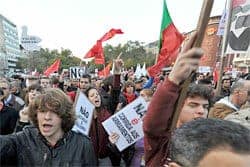