A history of racism against travelling people

This article is over 10 years, 2 months old
Travellers have faced racism for centuries. As early as the 16th century, laws were passed in England expelling so called "Egyptians" or Gypsies.
Downloading PDF. Please wait...
Tuesday 25 October 2011

Travellers have faced racism for centuries. As early as the 16th century, laws were passed in England expelling so called “Egyptians” or Gypsies.

Roma Gypsies were expelled from many other European countries too.

In the 18th and 19th centuries, several European governments tried to force Travellers to “assimilate”. In some cases, they took Traveller children away and placed them in non-Traveller families.

Adolf Hitler’s Nazis murdered up to half a million Gypsies in the Holocaust during the Second World War.

This anti-Traveller racism remains strong to this day. Travellers are more likely to die earlier, to live in poverty, and to have worse health and education than settled people.

Basildon council leader Tony Ball justified his vendetta against the Dale Farm Travellers by referring to “the law”. But the law systematically discriminates against Travellers.

So, Travellers at Dale Farm had applied time and time again for planning permission, only to be continually refused. More than 90 percent of Traveller applications are refused in the first instance.

And for all their talk of “obeying the law”, last week’s eviction was a graphic reminder of how police and councils can simply disregard the law when it suits them.

A judicial ruling had specified that certain plots, along with gates, fences and walls, could remain. But police smashed in a fence when they entered the site. One Traveller said police had kicked her fence in too.

The ruling also said that the council had to provide electricity to the legal plots during an eviction. For at least some of the time, it failed to do so.

Mary, one of the Travellers, told Socialist Worker of her shock at the level of racism she faced. “I saw lots of other councils on the news digging trenches to stop us coming onto their land,” she said. “I couldn’t believe it. We’re not a different species—we’re human beings.”

“You’re Travellers—so why don’t you travel?” The mainstream media has slung this question at the Dale Farm Travellers time after time during their eviction. It wilfully ignores the real obstacles that Travellers face.

A series of laws has made travelling much harder. There are far fewer legal sites that they can move to.

And living “on the road” no longer an option—even if Travellers did want to do this—because the police would simply move them on.

The Tory’s 1994 Criminal Justice Act removed the responsibility of councils to provide sites for Travellers.

The government encouraged Travellers to buy their own land—which is precisely what Dale Farm Travellers did. Now they are getting blamed for it.

Labour’s 2004 Housing Act obliged councils to provide Traveller sites. But many failed to do so. Money set aside for providing legal sites was spent elsewhere.

The Tories have set about making life even harder for Travellers. They have scrapped a programme of grants for sites and revoked the rules requiring councils to provide for Travellers.

Dale Farm residents weren’t against moving. They tried to move to nearby land, but these offers were rejected by the council.

The Travellers want to go somewhere where they can live together, not be isolated in scattered houses.

They aren’t against travelling. The problem is there’s nowhere to travel to. 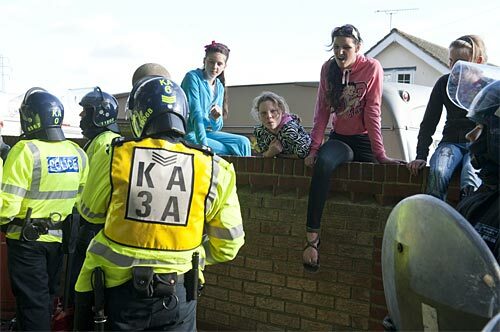