A message from the French strike movement: ‘We have won and so can you’

This article is over 15 years, 9 months old
The neo-liberal attack on wages and working conditions across Europe was dealt a great blow this week when a mass movement of young people and workers in France forced the country’s right wing government to scrap its CPE employment law.
Downloading PDF. Please wait...
Saturday 15 April 2006

The neo-liberal attack on wages and working conditions across Europe was dealt a great blow this week when a mass movement of young people and workers in France forced the country’s right wing government to scrap its CPE employment law.

The CPE had become a symbol of the government’s neo-liberal offensive. Its defeat has hurled back the French ruling class’s plans and shaken other elites across Europe.

The French movement’s victory offers an example of how to fight ­effectively against neo-liberalism. A wave of university occupations spread into mass demonstrations, high school blockades and, crucially, strikes by workers.

British public sector workers are facing an assault on their pensions and are due to hold three days of strikes later this month—and the victory in France will boost their confidence.

The CPE—which would have allowed employers to sack any worker under the age of 26 without reason—has sparked huge ­protests across France over the past few weeks.

Danièle Obono, a student activist at the Sorbonne university in Paris, told Socialist Worker, “We’ve shown that when we struggle hard, when we’re united and radical, it is worth it because we can win.

“Our biggest achievement so far is to have shown, not just to workers in France but across Europe, that mobilising can have a massive impact and can create a political crisis for neo-liberalism.

“This is the first mass movement that has achieved a victory in France for a long time. Now we have to fight other battles.”

This sentiment was echoed by Basile Pot, a railworker at the Gare de l’Est in Paris. “It was a happy moment for us on Monday when we heard president Chirac annoucing the end of the CPE,” he said.

But activists stress that forcing the government to drop the CPE is only the first step in the campaign against attempts by France’s ruling elite to promote job insecurity—or “flexibility” as they call it—throughout the workforce.

Union activists fighting attacks on pensions in Britain welcomed news of the French victory. “People are feeling really buoyed up about what’s taken place,” said Rahul Patel from the Westminster branch of the Unison union.

“If we learn from the French strategy, we can win too. A good step would be for the TUC to call a national demonstration on the next day of our national strike action.”

Cathy Cross from Hammersmith Unison added, “Many of our strikers are young workers who are new to unions. They’ve shown the same political spirit as the student movement in France.” 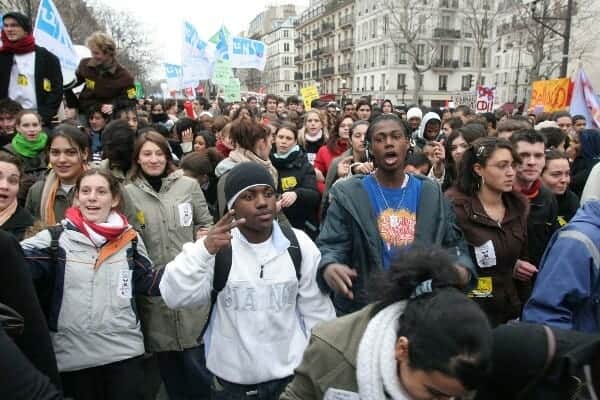