A ‘natural’ disaster made worse by the profit system

This article is over 17 years, 5 months old
THE ONLY aspect of this disaster that is "natural" is that the tsunami happened in the first place. The widespread death and destruction the tsunami has brought are largely man made.
By Giles Ji Ungpakorn in Bangkok, Thailand
Downloading PDF. Please wait...
Saturday 08 January 2005

THE ONLY aspect of this disaster that is “natural” is that the tsunami happened in the first place. The widespread death and destruction the tsunami has brought are largely man made.

Nothing makes this more clear than the fact that the meteorological office in Thailand had one hour’s notice of the tsunami threat, but decided to downplay the danger because of the potential negative impact on tourism. Many lives could have been saved if the cost to ordinary people had been considered above the cost to Thailand’s lucrative tourist industry.

As events in Thailand show, natural disasters, such as violent storms, earthquakes and tsunamis may have natural causes, but their effects are the result of the profit-driven system we live in.

Most importantly, the tsunami would have killed far less people if a proper early-warning system had been put in place, like the one in the Pacific. However, only last year Asian leaders collectively rejected a proposal from meteorologists and geologists to set up a tsunami warning system due to the “high cost”.

A leading meteorologist in Thailand has been warning for years that the island of Phuket faced the danger of a tsunami. No one listened to him.

Even without a modern warning system, authorities in all countries were in a position to send out evacuation calls. A tsunami centre in Hawaii knew about the danger but claimed it “did not know who to contact”.

Lists of international government telephone numbers cannot be hard to find on the internet. Sri Lanka and India would have had three hours notice to evacuate.

The second factor determining the impact of such a disaster is the development of global capitalism. Part of the reason why Thailand suffered less than Aceh or Sri Lanka, despite the appalling losses, was the fact that the Thai economy is more developed.

People can withstand the impact of disasters better if they live in stronger houses and do not need to scrape for a living in small boats on the coast.

Nearby towns can come to the rescue much faster.

However, the problem is that globalisation does not bring development to all parts of the global economy. Much inequality remains and the poor suffer most—many of those who have died in the last week had been forced to the margins of the world economy.

Global capitalism has given us the means to reduce the impact of natural disasters, but left to itself, the huge potential of capitalism will never be used for the benefit of the majority of humans.

Imperialism is another factor that affected the impact of the tsunami. Indonesia, Sri Lanka and Thailand are “mini-imperialists”. The central governments in these countries must “prove” to the world’s superpowers that they can “control and govern” all areas within their borders.

Other capitalists will not take a small state seriously if they can’t control their own borders. Investment from major corporations is only forthcoming to those powers who prioritise economic and political stability over providing even basic needs for their populations.

The militarisation, repression and consequent impoverishment of these areas are factors in the regional powers’ continued economic growth and development.

The fourth factor which determines the impact of disasters is the level of resistance by ordinary people to the horrors of globalisation. Many of the countries affected by the tsunami are not poor.

India is a nuclear superpower and Thailand is a rapidly developing nation. The Thai prime minister and his political cronies are multi-millionaires.

The issue is the distribution of wealth and power in these societies. No country in the area has a welfare state or a properly organised emergency service—there are almost no public ambulances.

Thailand’s government spends millions on the military, yet this huge military is there to guard the interests of the ruling class, not to protect the ordinary population.

In the past it has gunned down pro-democracy protesters.

The military has not been fully mobilised to deal with this disaster. For example, three navy ships remain guarding the king’s summer palace at Hua Hin, rather than urgently steaming round to the west coast to help with the disaster.

The massive number of Thai troops stationed in the three far south provinces “to fight terrorism” have not been moved. Indonesia has one of the largest armies in the world, yet it has not been urgently and fully mobilised to help those in Sumatra.

Racism in Thailand means that many of the hundreds of Burmese fishermen, working on Thai boats and killed in the tsunami, will never be identified. Their families back home will never receive news of their loved ones.

Some campaigners in the region are deeply suspicious of the aid offered by the US military. Rather than calling for a rejection of such desperately needed aid, we have to urge that more should be done and that the US—as the richest and most powerful nation on earth—must contribute the most.

The same attitude goes for the big corporations, many of which try to show their generosity in public relations exercises. When death and destruction come, the corporations are quick to take advantage.

In Thailand, TV news about the disaster carried advertisements for products in the corner of the screen. Private airlines rushed to advertise themselves by announcing that they were offering free flights for the victims or for doctors.

Big companies were quick to advertise their unusual generosity—not normally shown when it comes to paying wages or destroying local peoples’ livelihoods. Though the dead are not yet in the ground the business news reports discuss the ups and downs of stock exchanges and the effects on the tourist industry.

We must demand that the corporations give more in the long term—and not just in aid. They must pay higher wages, improve conditions and be taxed at a higher rate.

In contrast to the callous reckonings of big business, we can take heart in looking at the true spirit of humanity. At the moment, millions of ordinary people around the world are overwhelmed with grief and sympathy for fellow human beings of all races, nationalities and religions.

The British RAF crew, which flew relief supplies into Aceh, felt that their mission was “one of the most worthwhile things that they had ever done”. I do not recall any military personnel saying this about a war.

People from the town of Beslan, who recently lost their children, have donated all they can. Millions of ordinary people rush to help their fellow humans when disaster strikes.

Donations of blood, food, medicines pour in, as do offers of help. All this flies in the face of those who mock us when we talk about a new world of human solidarity.

It is this spirit that we need to build on to prevent globalisation and imperialism turning natural disasters into the utter catastrophe we have witnessed in the last few days. Our struggle to build a world where protection from earthquakes is not the privilege of only the rich in the most developed parts of the world is vital in stopping a tragedy on this scale from happening again. 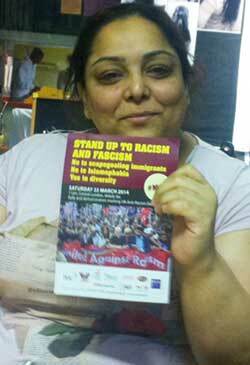